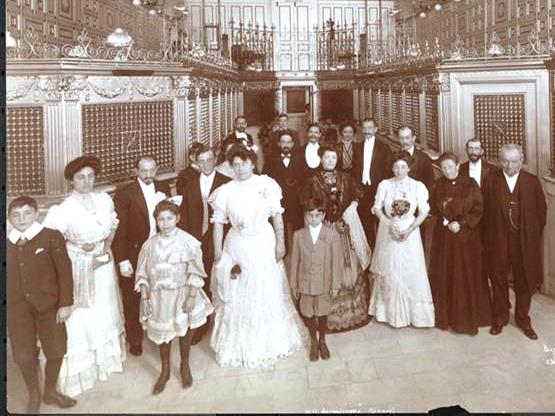 This early 20th-century assemblage in the interior of the S. Jarmulowsky Bank on Manhattan’s Lower East Side could include relatives of Washington resident Michael Herman. (Courtesy Museum at Eldridge Street)
Advertisement

BALTIMORE (JTA) – On a recent visit to Manhattan, Michael Herman brought his wife and two daughters to a stone building at the corner of Canal and Orchard streets. A chiseled ribbon running across the 12-story structure’s facade reads S. JARMULOWSKY’S BANK EST. 1873.

Alexander “Sender” Jarmulowsky was Herman’s great-great-grandfather and the bank’s founder. The building the Hermans visited was constructed in 1912, shortly before Jarmulowsky’s death.

The Hermans soon learned of another connection that Jarmulowsky had to the Lower East Side neighborhood after strolling to the nearby Eldridge Street Synagogue to see its museum and historic sanctuary.

When Herman mentioned his great-great-grandfather’s name, a museum employee informed him that Jarmulowsky was the president of the congregation when the synagogue opened in 1887.

“I had no idea,” said Herman, 49, an emergency-management consultant who lives near Washington, D.C.

In fact, Herman never had seen a photograph of Jarmulowsky until a few weeks earlier; his daughter’s online search found it on the synagogue’s website. That led to their visit.

Connections like Herman’s to the Eldridge Street Synagogue interest the staff members there now organizing an exhibition for a family history center being established in a lower-level room that once was the rabbi’s study. (The synagogue does not have a full-time rabbi; a few dozen worshippers regularly attend Shabbat services.)

The exhibition is being mounted in conjunction with the June 12 opening of a visitors center telling the story of the congregation and its place in a neighborhood that was the country’s center of Jewish life beginning with the great wave of immigrants arriving from Eastern Europe 130 years ago. 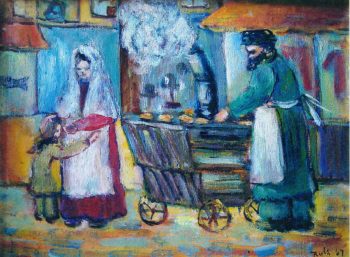 Amy Stein-Milford and Nancy Johnson, the synagogue museum’s deputy director and archivist, respectively, said they hope that “Seeking Kin” readers and others come forward with photographs and stories about some of the congregation’s early leaders and worshippers.

High on their wish list is a photograph of Isaac Gellis, who in the late 19th century established an eponymous kosher sausage business on Essex Street and would serve as the synagogue’s third president. His descendants have been found and interviewed, including a man also named Isaac Gellis, but none has ever seen such a photograph.

Recently acquired images of early figures include photographs of Gittel Natelson, who ran the congregation’s mikvah, and of Peter and Francis Herter, the Roman Catholic architects of many tenements for whom Eldridge Street was their first synagogue design. There’s also a drawing of Pinchas Minkowsky, the first cantor, who Stein-Milford said earned what in 1887 was a princely salary: $2,500.

The family history center’s exhibition includes a teacup that one immigrant brought to America; an oil painting done by the now-97-year-old Ruth Warembud depicting a pushcart selling sweet potatoes, her favorite growing up on Broome Street; the tallit and tefillin used by a man who met and married his wife in an Austrian refugee camp after World War II before they settled on the Lower East Side; and a photograph of that wedding.

When the synagogue was renovated in 2007 – it is a National Historic Landmark – the former study was to have been used for visitors to conduct genealogical research.  The plan was scrapped, but now, Johnson says, “I wanted it to focus on family history.”

“We’re interested in the history of … people who were immigrant families in this neighborhood,” she said. “We want to continue to add stories of the people. It enriches the history of the building, the congregation and the neighborhood.”

That would be welcome because recent decades have seen a dramatic decline in the Lower East Side’s Jewish population and with it the near-disappearance of the once-vibrant retail presence that included such beloved institutions as the Ratner’s and Bernstein’s restaurants, Gertel’s bakery and Guss’s Pickles.

Ironically, the upcoming Eldridge Street openings occur during a boon in cultural tourism to the Lower East Side’s Jewish-legacy sites. Prior to its  renovation in 2007, the building drew 12,000 visitors annually. Now the figure is 40,000.

“A lot of people come to explore the building,” Stein-Milford said. “These are stories from our own history that we want to share with the public to enhance their understanding of this building and of the Jewish immigrants who built it.”

Soon after returning to Washington, he received an email from the Eldridge Street staffers containing scans of the Yiddish newspaper announcement of the bank’s opening and photographs of people posing inside.

Herman believes that those shown could include his ancestors and hopes that “Seeking Kin” readers can identify some.

“I think it’s wonderful I was able to connect with a piece of family history I feared was lost,” he said. “It’s an opportunity to get my daughters involved and more knowledgeable of a part of their family they had no familiarity with.

“I don’t know a lot of my family history. That’s one of the things I’m hoping to find out from the museum. Now I feel I have a much stronger connection to a place and a synagogue I didn’t have any connection to before.”

(Please email Hillel Kuttler at seekingkin@jta.org if you can identify those shown in this group photograph or have ancestral connections to the Eldridge Street Synagogue. If would like “Seeking Kin” to write about your search for long-lost relatives and friends, please include the principal facts and your contact information in a brief email. “Seeking Kin” is sponsored by Bryna Shuchat and Joshua Landes and family in loving memory of their mother and grandmother, Miriam Shuchat, a lifelong uniter of the Jewish people.)