A decade later, Mass. Jews look back at legacy of same-sex marriage first 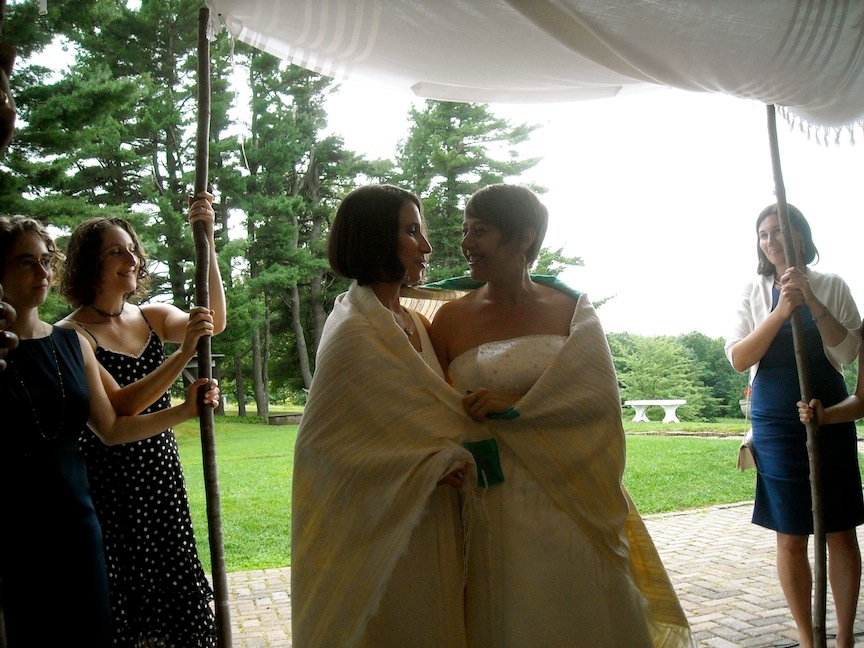 Idit Klein, right, the executive director of Keshet, married Jordan Namerow under a chuppah at their 2011 wedding in Massachusetts that was officiated by two rabbis. (Courtesy of Idit Klein)
Advertisement

Leah Finch, left, and her partner, Adrien Hornby, receive a round of applause from students from the Solomon Schechter Jewish Day School of the Pioneer Valley after applying for a marriage license on May 17, 2004 in Northampton, Mass. (Angela Jimenez/Getty Images)

BOSTON (JTA) — Ten years ago, shortly after midnight on May 17, 2004, a jubilant Arthur Lipkin and his longtime partner descended the stone steps of Cambridge City Hall clutching a marriage license application.

It was a historic night of revelry and celebration, as Massachusetts became the first state in the nation to allow same-sex couples to legally marry.

Outside Cambridge City Hall, where reporters and television cameras from around the world captured the festivities, some 10,000 well wishers cheered on the hundreds of couples who had waited long hours in line to receive applications to marry.

Lipkin, a veteran gay rights activist, was fourth in line.

“We walked down, but it was really floating down those stairs. It just felt like a moment of immense joy and community celebration that we were part of in Cambridge,” recalled the now 67-year-old retired high school teacher.

A week later, he and his partner, Robert Ellsworth, were married by a member of the state legislature.

The following month, Rabbi Emily Lipof stood with another couple under a chuppah in a backyard ceremony, marrying two Jewish women congregants from Temple Ohabei Shalom, a Boston Reform synagogue.

“It was wonderful, because they were celebrating each other and their marriage but also an important moment. There was an extra dimension of meaning,” recounted Lipoff, who is now the synagogue’s rabbi emerita.

Ten years after the first same-sex marriages were performed in Massachusetts, the national legal and political landscape has shifted dramatically. Today, 19 states and the District of Columbia allow same-sex marriage — two of which, Oregon and Pennsylvania, joined the list in May following federal court rulings striking down their bans on same-sex marriage.

Klein said that the shift is mirrored in the Jewish community.

Idit Klein, right, the executive director of Keshet, married Jordan Namerow under a chuppah at their 2011 wedding in Massachusetts, which was officiated by two rabbis. (Courtesy of Idit Klein)

“It is woven into the fabric of Jewish community life, the way other simchot have always been,” Klein said, using the Hebrew word for joyous occasions.

A February poll by the Public Religion Research Institute released found that 83 percent of Jews support same-sex marriage, the highest level of support among any of the religious groups listed.

Rabbi Ronne Friedman, senior rabbi at Temple Israel in Boston, wrote in an email to JTA that he is struck by the “rapidity with which same sex marriage taboos have fallen, across the country.”

He estimates that he and his fellow clergy members at the Reform synagogue have officiated in at least 100 same-sex weddings over the past decade.

After same-sex marriage became legal in Massachusetts, Rabbi Neal Loevinger officiated at his first — and so far only — same-sex wedding.

While the wedding was not going to take place in the synagogue, Loevinger brought the issue to the synagogue’s board to see how they would feel about him officiating, given that the Conservative movement officially did not approve of same-sex unions.

Loevinger, now a rabbi at Temple Beth-El in Poughkeepsie, N.Y., said he did not know what to expect from the synagogue board. But they were overwhelmingly in favor, he recalled, with only one vocal opponent.

“We all grew together in that experience,” he said of his discussions with the board.

Being married legally was an important statement to make for the couple’s two children, Jacobs said.

“People fought for this, and we should be counted,” said Jacobs, now the editor of the Jewish Journal newspaper in Salem, Mass.

Since then, Loevinger said, he has not officiated at any other same-sex weddings. “Only because no one has asked,” he explained.

He said he had strongly supported the effort in New York to legalize same-sex marriage, which was approved by the state legislature in 2011.

“I was proud that I was able to advocate for that … both within my synagogue and in our wider community,” he said.

Loevinger was not the only Conservative rabbi who blessed same-sex weddings prior to gaining the approval of his movement, which arrived at its current embrace of same-sex unions gradually.

Conservative rabbis could choose between the two positions, with some feeling empowered to now officiate at same-sex unions.

In 2012, the movement gave same-sex marriage a more unambiguous embrace. The law committee by a vote of 13-0 with one abstention issued new guidelines for how rabbis could perform same-sex marriage ceremonies.

“There’s been a profound shift within the Conservative movement, and there are pockets of openness in the Orthodox world,” Klein said.

Though same sex-marriage is not accepted within Orthodox Judaism, Klein said she sees rabbis and other leaders quietly supporting same-sex couples or parents whose children come out as gay.

“Over the past 10 years, suspicion and misgivings have given way to empathy,” said Rabbi Steven Greenberg, an openly gay Orthodox-ordained rabbi who in 2011 caused a stir when he officiated at what he called “a Jewish commitment ceremony and civil marriage” for two men. Greenberg married his own partner in a 2012 civil ceremony in New York.

Greenberg, who lives in Boston, found a religious home at Congregation Kadimah-Toras Moshe, a Modern Orthodox synagogue in Boston, where he said he and his partner and daughter feel welcome. He credits the synagogue’s rabbi, Yonah Berman, with encouraging an inclusive atmosphere.

Berman, who said he is expressing his own views and not speaking for the congregation, noted that Massachusetts is identified as a welcoming place for same-sex couples.

“While Orthodox synagogues and rabbis are bound to an interpretation of Jewish law that does not recognize these marriages as religiously valid, that does not change the realities that these couples and their children are part of the social fabric of our community,” he said. “We therefore have a responsibility, both religiously and ethically, to embrace them.”

Berman acknowledges that there is a spectrum of responses within the Orthodox community on this issue, but he said: “I don’t feel I’m an outlier.”