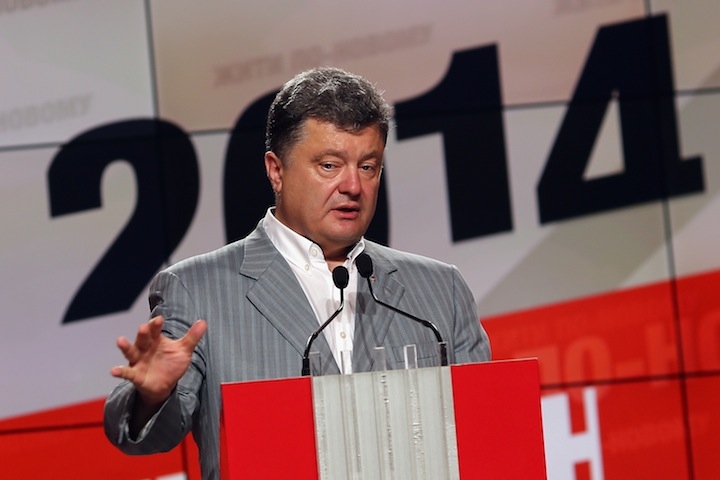 Ukraine's president-elect, Petro Poroshenko, speaks to the media during a press conference on May 26, 2014 in Kiev. (Dan Kitwood/Getty Images)
Advertisement

(JTA) — To many of his voters, President-elect Petro Poroshenko represented hope for fixing Ukraine’s ailing economy because of the billionaire candy company founder’s success in business.

Others believed that Poroshenko, who won 54 percent of the vote in last week’s presidential race, was the best candidate for negotiating an end to hostilities with Russia and Russian-backed secessionists because of his experience in international relations, which he acquired during his one-year stint as Ukraine’s foreign minister in 2010.

Ukrainian Jewish leaders have additional reasons to celebrate the outcome. To them, the presidential election results came as a relief because they thwarted the political ambitions of the Ukrainian far right and thereby refuted Russian allegations that fascists and anti-Semites were on the rise in Ukraine.

“The failure of far-right groups in the elections proves everything we knew to be true about the tolerant nature of Ukrainian society,” Josef Zissels, the head of Ukraine’s Vaad Jewish umbrella group, told JTA.

In the presidential race, the candidate for the ultranationalist Svoboda party, Oleh Tyahnybok, won only a little more than 1 percent of the vote. It was a major defeat for Svoboda, which had been Ukraine’s fourth-largest party after winning 10 percent of the vote in the 2012 parliamentary elections. At the time, Svoboda’s successes worried Ukrainian Jews because of the party’s record of anti-Semitic rhetoric. Tyahnybok himself has inveighed against “the Jewish-Russian mafia.”

Another ultranationalist hopeful, Dmytro Yarosh, failed to garner 1 percent of the vote despite the central role that his Right Sector movement had played, along with Svoboda, in the revolution that ultimately led to the May 25 presidential election.

The combined vote for Yarosh and Tyahnybok was lower than the more than 2 percent clinched by Vadim Rabinovich, a Jewish business tycoon who is involved in numerous Jewish projects, including the establishment of the European Jewish Parliament and the now-defunct Jewish News One television channel. In the Odessa region, Rabinovich finished fourth with 6 percent of the vote.

The result was particularly pleasing to the many Ukrainian Jews who resent Russia using the issue of anti-Semitism to attack the post-revolution Ukrainian government.

At a March news conference, Russian President Vladimir Putin said Russia was concerned by “the rampage of reactionary forces, nationalist and anti-Semitic forces in certain parts of Ukraine, including Kiev.”

Ukrainian Jewish leaders have largely rejected Putin’s characterization of the situation in Ukraine.

“The failure of the Ukrainian far right in the presidential elections shows the Russian rhetoric to be an attempt to overblow some essentially insignificant fringes out of proportion,” said Igor Shchupak, director of the Jewish museum of Dnipropetrovsk.

He also said he believed Poroshenko was “a candidate with a unique set of skills for leading Ukraine now.”

In the months since the ouster of Russian-allied President Viktor Yanukovych, Ukraine has been the scene of often bloody upheaval. Russia has annexed the Crimean Peninsula, while pro-Russian separatists have taken up arms and clashed with Ukrainian forces in the country’s east.

Throughout the turmoil, Russian officials made repeated references to alleged anti-Semitism in Ukraine, where several attacks on Jews have occurred since the revolution. Pro-Russian activists and their opponents have blamed each other for the incidents, making some Jews fear they were becoming pawns in a much larger dispute.

Poroshenko’s victory is also significant given the unconfirmed but widespread reports that he is of partially Jewish ancestry, Zissels said.

According to Russia 1, Poroshenko’s father, Alexey Valtsman, was a Jew from Odessa who in 1956 took his wife’s last name. But last year, a Poroshenko spokeswoman asked Forbes Israel to remove the billionaire’s name from a list of the world’s richest Jews. The spokeswoman, Irina Fireez, did not say why she wanted her boss’ name removed.

Poroshenko’s office did not reply to queries from JTA on this issue.

“Poroshenko’s lineage is none of my business, but what is noteworthy is that the widespread reports of his alleged Jewish lineage have done nothing to hurt his popularity,” Zissels said. “And this again attests as to the tolerant nature of Ukrainian society, despite Russian propaganda.”