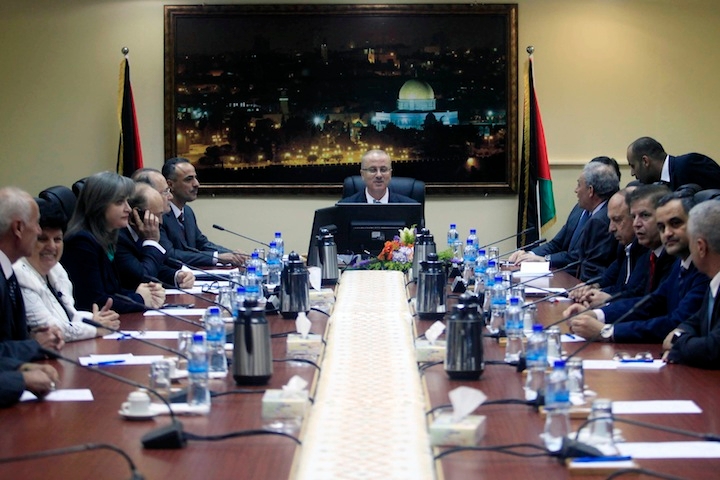 WASHINGTON (JTA) — The new Palestinian unity government brought together rivals Hamas and Fatah, but it has opened a divide between allies Israel and the United States.

“I’m deeply troubled by the announcement that the United States will work with the Palestinian government backed by Hamas,” Prime Minister Benjamin Netanyahu said Tuesday in an interview with The Associated Press.

The Obama administration’s announcement this week that it would continue working with and funding the Palestinian Authority under the new Hamas-backed unity government appears to have taken Israel aback. It represents something of a shift for the United States, which previously had voiced sympathy for Israeli concerns about the Palestinian unity government.

Analysts said the sharpness of the Israeli reaction should be seen in the context of anxieties that this and other U.S. moves could leave Israel isolated on vital matters.

“Take a step back and look at the trend line to see Israelis are deeply concerned about a nuclear Iran and the Americans’ engagement with Iran,” said Jonathan Schanzer, vice president for research at the Foundation for Defense of Democracies, a Washington think tank. “We’re now looking at another situation where an illicit actor that endangers Israel is now being rehabilitated.”

Nathan Brown, a professor of political science and international affairs at George Washington University, said Israel’s concerns were about more than just the issue of Hamas.

“It’s clear that the U.S. and Israelis are not really coordinating on the issue,” Brown said. “Moving the dispute into public is unusual and it shows how worried Israel is about this development.”

Palestinian Authority President Mahmoud Abbas on Monday swore in a government of technocrats that has the backing of his Fatah party, which is preeminent in the West Bank, and Hamas, a U.S.-designated terrorist group that governs Gaza.

Abbas said the new government would abide by peace agreements and recognize Israel, although Hamas continues to reject both principles.

State Department spokeswoman Jen Psaki said at Monday’s daily briefing for reporters that the United States would continue to deal with the new government and that funding would continue.

“At this point, it appears that President Abbas has formed an interim technocratic government that does not include ministers affiliated with Hamas,” she said.

“Moving forward, we will be judging this government by its actions,” she said. “Based on what we know now, we intend to work with this government, but we’ll be watching closely to ensure that it upholds the principles that President Abbas reiterated today.”

The willingness to treat the new government no differently than the old one, which had no Hamas influence, came as a surprise. In a statement over the weekend, Psaki had said that Secretary of State John Kerry expressed his concern about the new government in a phone call to Abbas.

Israel’s ambassador in Washington, Ron Dermer, posted his reaction to Facebook within hours of Monday’s State Department announcement of the U.S. position.

“Israel is deeply disappointed with the State Department’s comments today on the Palestinian unity government with Hamas, a terrorist organization responsible for the murder of many hundreds of Israelis, which has fired thousands of rockets at Israeli cities, and which remains committed to Israel’s destruction,” Dermer said.

He suggested that the technocrats provided cover to terrorists.

“This Palestinian unity government is a government of technocrats backed by terrorists, and should be treated as such,” Dermer said. “With suits in the front office and terrorists in the back office, it should not be business as usual.”

Netanyahu last month formally suspended peace negotiations with Abbas in part because of the announcement that governance talks with Hamas were underway. His security Cabinet reiterated that posture in a unanimous vote Monday and said in a statement that it would consider sanctions against the Palestinian Authority.

Congressional lawmakers from both parties said Hamas backing for the government could jeopardize U.S. funding for the Palestinian Authority — between $400 million and $500 million a year.

There was, however, a subtle difference in the statements between Republican and Democratic lawmakers, with Democrats stopping short of calls for an immediate cutoff.

Rep. Nita Lowey (D-N.Y.), the highest-ranking Democrat on the House Appropriations Committee, said the Obama administration should continue to advance peace talks efforts. But she said funding for the Palestinian Authority was in “jeopardy” as long as Hamas rejected the preconditions for peace talks set down in 2006 by the Quartet, the international grouping that mediates the peace talks: recognizing Israel, renouncing terrorism and abiding by past agreements.

Rep. Eric Cantor (R-Va.), the majority leader in the U.S. House of Representatives, said unequivocally that funding should stop.

“Until such time that it is determined that assistance to this so-called technocratic government is consistent with our own interests, principles, and laws, it is incumbent on the Administration to suspend U.S. assistance,” he said in a statement.

Major American Jewish groups backed a review of funding for the Palestinian Authority.

“U.S. law is clear — no funds can be provided to a Palestinian government in which Hamas participates or has undue influence,” the American Israel Public Affairs Committee said in a statement. “We now urge Congress to conduct a thorough review of continued U.S. assistance to the Palestinian Authority to ensure that the law is completely followed and implemented.”

An AIPAC source said the group backed cutting funds pending such a review. “AIPAC supports an immediate suspension of aid to the Palestinian Authority pending a complete Congressional review,” the source said.

But Lara Friedman, the director of government relations for Americans for Peace Now, said the new government likely falls within the law.

“With no Hamas members inside the new government, no evidence of Hamas having ‘undue influence’ over it, and clear statements from Abbas that it will respect the Quartet conditions, the fact is that there is simply nothing in law requiring aid to the P.A. to cease,” she said.

Friedman noted that as recently as last month, after the talks between Abbas and Hamas were launched, AIPAC opposed new legislation that would cut funding to the Palestinian Authority, in part deferring to Israeli concerns that such actions would undercut Israeli-Palestinian security cooperation.

Robert Satloff, the executive director of the Washington Institute for Near East Policy, wrote that according to his conversations with Israeli and U.S. government officials, the Americans had agreed to support Israel’s refusal to deal with the new unity government even as the United States maintained ties with it.

But with a clear difference in policy emerging, such support might not be enough to assure Israel, Satloff added.

“It is difficult to see what ‘support’ means if the practical result is U.S. acquiescence to Israel’s political isolation, which is the expected result of the considerable daylight that would open between the two countries on this critical issue if they chose different paths,” he wrote.