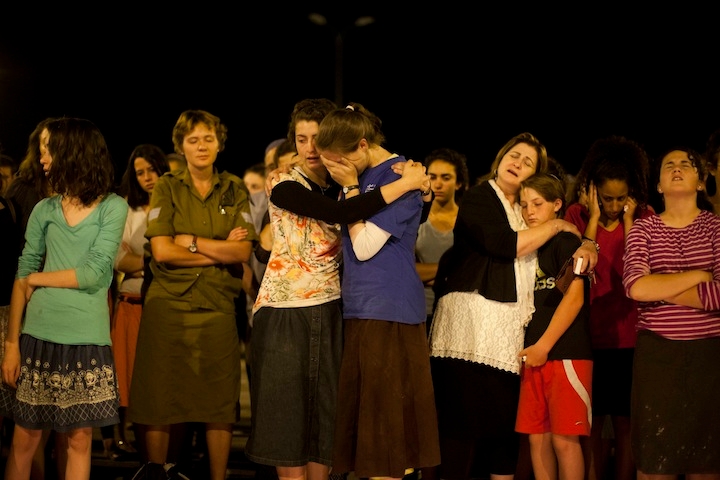 Israelis gather at the West Bank hitchhiking spot that was the site of the abduction of three Jewish teenagers Eyal Yifrach, Naftali Fraenkel and Gilad Sha'ar after their bodies were found, June 30, 2014. (Yonatan Sindel/Flash 90)
Advertisement

For the first time in two and a half weeks, my children did not ask, upon opening their eyes in the morning, “Has there been any news about Naftali, Gilad and Eyal?”

They did not have to ask because last night our worst fears were confirmed with the announcement of the discovery of the teens’ bodies in a shallow grave in a field north of Hebron.

Actually, they were my worst fears. My children, at least the younger ones, believed throughout this ordeal that the teens would be found alive and returned to the warm embrace of their families.

Today is the first day of summer vacation. My children should have been at the national opening summer program for the religious Zionist Bnei Akiva youth movement, a day at an amusement park. But it was canceled Monday following the announcement that the bodies had been found. The three murdered teens had been involved in the movement.

My kids could have been at the local swimming pool, since it has been in the 90s for more than a month.

Instead, they are all sitting with me on the couch watching the funerals on TV. Hours and hours of eulogies and video footage are tracing the 18-day drama.

The older ones check their smartphones every few minutes to track developments in the search for the kidnappers/killers. They were the first to let me listen Tuesday to the newly leaked recording on WhatsApp of the phone call made by Gilad Shaar to the emergency call center. Sounds on the recording in hindsight certainly sound like gunshots, and as I listened, I was disturbed to realize that my children had already heard them.

Last night, following the announcement about the bodies, our community rabbi invited the youth of our community to join him to talk about their feelings upon reaching the end of this tragic episode. My teenage children went. They said the discussion was emotional and touched on an array of issues — from what they should do going forward to how they can continue to relate to a God that allows something like this to happen.

For the last 18 days, many of these teens have been living and breathing the believed captivity of the teens, not considering that they were killed right away and their bodies dumped in a shallow grave outside of Hebron. They have attended special prayer services, recited psalms in public and private, and decided to take on additional mitzvot to convince God to bring the boys home. And they have returned home — just not in the way that we hoped they would.

The Education Ministry this morning sent a letter to parents, emailed by our local schools, to help us guide our children through this difficult time and return them to their “full and active lives.”

At this moment, seeing on television the teens’ fathers saying the Mourner’s Kaddish over their sons’ shrouded and flag-draped bodies, it is hard to believe that things will ever be normal again. But I know they must. For all of our children, for us and for our country.