For trailblazing Israeli lacrosse squad, a pioneer for gay athletes in net 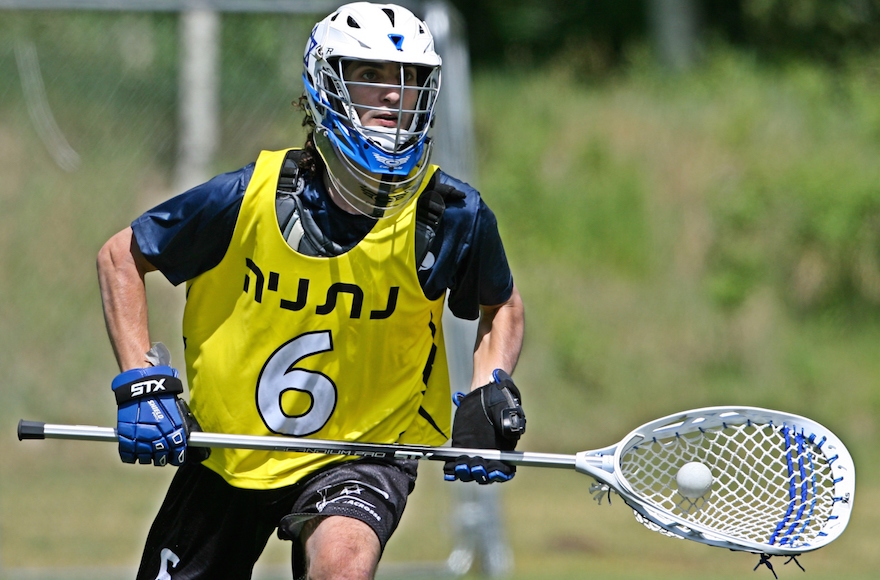 Andrew Goldstein, a member of Israel’s national lacrosse team, says “the landscape has really changed” for gay athletes since he came out in 2005. (Larry Palumbo)

BALTIMORE (JTA) — In the years after coming out as gay, lacrosse player Andrew Goldstein recalls being asked on panel discussions whether major American professional sports leagues would include openly gay athletes.

It’s a question, Goldstein said, that is no longer relevant with Jason Collins in the National Basketball Association and Michael Sam, who was drafted recently by the St. Louis Rams of the National Football League.

“We’re in a new era, and at the very least, kids in high school who are closeted can say, ‘If I’m good enough in my sport, I can play at any level,’ “ said Goldstein, one of the earliest U.S. team-sport athletes to come out. “That is a huge change.”

Goldstein, 31, who twice earned All-America honorable mention as a goalie at Dartmouth, is playing for a national Israeli lacrosse team that like himself is somewhat of a pioneer.

The Israelis will be making their debut in the World Lacrosse Championships that open Friday in Denver – remarkable for a squad that didn’t even exist four years ago.

Joining the Israeli squad, he said, “has changed my life, given me something to believe in and work hard for” athletically.

Last week, speaking from Vail, Colo., during a break in the team’s workouts, Goldstein spoke about the changed landscape for gay athletes since he came out in 2005 in an interview with ESPN.com and in a report aired on the network.

“When I was in high school, there were really no openly gay role models in sports that a closeted high school athlete could look up to,” said Goldstein, who was raised near Boston.

But the emotional support he received from his Dartmouth teammates exceeded all expectations.

“I knew I had 30 tough guys on my team who had my back,” Goldstein said. “Certainly the team mentality is a good thing when it comes to coming out.”

Goldstein, a scientist who oversees a Los Angeles laboratory that conducts research on prostate cancer, returned recently to lacrosse. He’s playing for a Beverly Hills club in an amateur league in his first competitive experiences since 2006, when he was a member of the Long Island (N.Y.) Lizards, a Major League Lacrosse franchise.

In July 2013, Scott Neiss, a Tel Aviv resident and executive director of Israel Lacrosse, which promotes the sport in the country, recruited Goldstein for the team.

“We didn’t know if he still had it,” said Neiss, who worked for the Lizards when Goldstein played there. “After seeing him try out, we knew that he did.”

His teammates on the Israeli squad – all U.S. immigrants and American Jewish players – include some intriguing characters possessing fine lacrosse pedigree.

They include Reuven Dressler, a standout at Yale before immigrating to Israel and now, as a 41-year-old physician, could be the starting goalie. Midfielder Matthew Cherry, like Dressler a native Philadelphian, was a 2013 first-team All-America at Dickinson who when the world tournament ends will begin basic training in the Israeli military.

Calling Smith “probably the top young Jewish coach” in the sport, Neiss said he could be overseeing the Israeli team by the 2018 world championships.

It was Neiss and several other American immigrants passionate about the sport who established a lacrosse beachhead in the Jewish state.

They secured funding from American Jewish donors, which started the ball rolling. Israel Lacrosse now has an annual budget of approximately $700,000, offices in New York and Tel Aviv and 11 full-time employees in Israel who promote lacrosse through free clinics at Israeli schools and programs charging participation fees.

This year, 250 paying participants were enrolled, with a goal of 700 next year, Neiss said.

Still, it remains a niche sport.

“We’re shooting for the stars,” Neiss told JTA last year during an exhibition game, when Israel defeated the Philippines’ national team. “We want to make lacrosse the national sport of Israel.”

Israel played other friendlies in the lead-up to Denver, including in Ashkelon last summer against Turkey; in September in Syracuse, N.Y., against the Iroquois Nation; and in March in Ireland.

Its first of three opening-round matches in Denver will be Friday afternoon against Sweden.

Goldstein had been invited to try out for the U.S. team competing in the 2006 world championships but was cut. He had visited Israel as a 10-year-old, but didn’t return until this year, when he helped run clinics with fellow Israel Lacrosse members at high schools in Ashkelon and Tel Aviv.

Gathering in Colorado, it was the first time many Israeli team members met one another. The 46-man squad will be trimmed to 23 for the tournament, with the remainder staying in Denver to play exhibitions.

Goldstein comes from an athletically gifted family. His sister, Lauren, and their father, Irwin, played hockey for Brown. Irwin’s father, Sol, was a goalie for a semi-pro hockey team in his native Montreal. Andrew’s brother, Bryan, was a lacrosse player at Amherst.

His spouse, Jamie Duneier, isn’t a big sports fan. But Goldstein said Duneier enjoys coming to games and practices, and has fit right in with the wives and girlfriends of the Israeli players.

“We like to say he’s the first lacrosse husband,” Goldstein said.

Goldstein clearly has newfound energy for his sport.

“Recapturing a little bit of the lacrosse magic is pretty exciting,” he said. “There’s this amazing feeling of being on the field and just doing what you were born to do, and leaving everything else behind.”