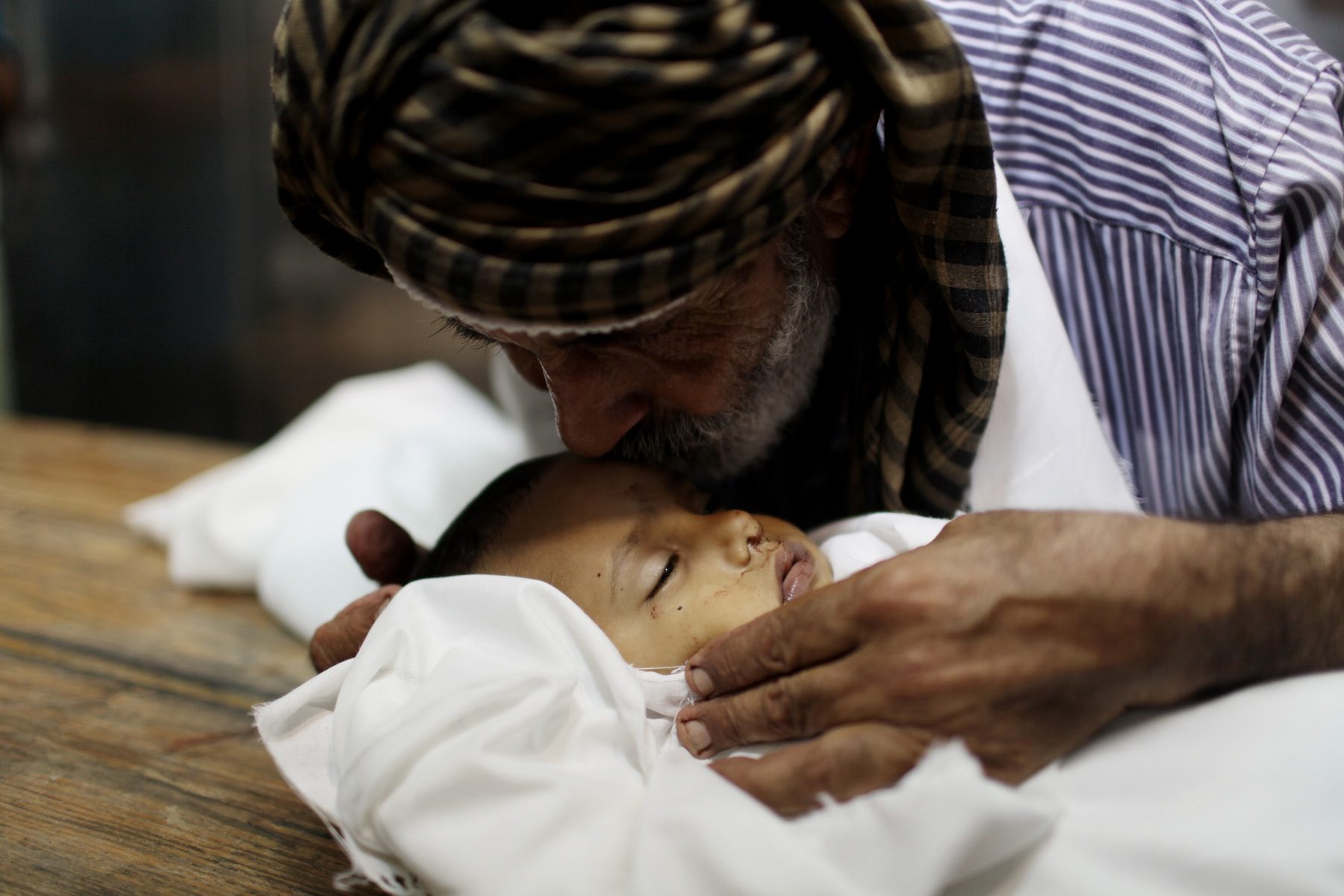 A Palestinian man kissing a baby killed in an attack on a United Nations school in the northern Gaza city of Beit Hanoun, July 24, 2014. (Emad Nassar/Flash90)
Advertisement

TEL AVIV (JTA) — Shortly after dawn on July 30, a bomb hit a United Nations school sheltering thousands of civilians displaced by the fighting in Gaza, killing at least 15 people and wounding dozens.

The attack on the Jabalia Elementary Girls School was the fifth attack on U.N. facilities in Gaza since fighting broke out July 8, but it wouldn’t be the last.

On Sunday, a missile hit another U.N. school in Rafah in southern Gaza, killing 10 and wounding 35.

The attacks on U.N. buildings have ratcheted up criticism of Israel, which already was under mounting international pressure to scale back its operations in Gaza in light of the mounting death toll there — now more than 1,800, 80 percent of them civilians, according to Palestinian sources.

U.N. Secretary-General Ban Ki-moon called the Rafah attack a “moral outrage and a criminal act” and demanded those responsible be held accountable. The U.S. State Department implied Israeli responsibility for the attack and called it “disgraceful.”

Israel insists it does not deliberately target innocents and has blamed civilian deaths on Hamas operating in densely populated areas. But the surging death toll has intensified criticism of Israel’s tactics, with some charging that its military has been insufficiently careful in choosing its targets.

“The United States is appalled by today’s disgraceful shelling outside an UNRWA school in Rafah sheltering some 3,000 displaced persons, in which ten more Palestinian civilians were tragically killed,” State Department spokeswoman Jen Psaki said Sunday following the Rafah strike. “We once again stress that Israel do more to meet its own standards and avoid civilian casualties.”

The Fourth Geneva Conventions Additional Protocol I requires militaries to “distinguish between the civilian population and combatants and between civilian objects and military objectives.” But it also prohibits militants from using civilians to “shield military objectives from attacks or to shield military operations.” The protocol says that if a building makes “an effective contribution to military action,” it may be attacked.

Israel has justified its actions in Gaza by charging that Hamas routinely uses civilian buildings for military purposes, launches rockets from densely populated areas, and stores weapons in schools and apartment buildings. The Israel Defense Forces says that when its bombs have hit civilian targets, it was either in error or aimed at a military target embedded among civilians.

In both the Jabalia and Rafah attacks, Israel claimed it was targeting militants active nearby.

“We are facing a terrorist organization that goes to all ends to carry out its terrorist activities,” Lt.-Col. Peter Lerner, the IDF spokesman, told JTA. “We don’t see that as an exemption from preventing civilian casualties, [but] civilians can get caught up in the midst of it. It is a reality of warfare.”

In some attacks on civilian targets, the IDF has explicitly denied that its ordnance was responsible. Israel denied responsibility for a July 28 strike on Shifa Hospital and Lerner said he could not confirm whether Israel had executed a July 30 strike on a Gaza power plant. Israel bombed the Al-Wafa Hospital on July 23 because, Lerner said, Hamas was using it as a “command and control center.”

But even in incidents where Israeli responsibility is not in doubt, experts say the IDF may have chosen a civilian target that did not deserve to be destroyed.

Bill Van Esveld, a senior researcher in the Middle East division for Human Rights Watch, pointed to a July 9 Israeli strike on a seaside cafe that left nine civilians dead. He also criticized Israeli strikes on homes of Hamas leaders, which an officer from the IDF’s legal department told JTA are often used as command centers or weapons storage.

“In specific cases we looked into, there was no military objective to be shot at in the first place,” Van Esveld told JTA. If the IDF attacks a house “purely because someone who lived there was a member of an armed group, whether you gave a warning or not, it’s not OK to attack the house.”

Israel has endeavored to limit civilian deaths by providing advance warning of impending bombings through phone calls and text messages, as well as by dropping leaflets. Israel also executes so-called “knocks on the roof” — dropping light bombs on buildings to warn residents still inside that a heavier strike is coming. But some say the warnings are insufficient.

“You can’t destroy a hospital because there’s a fighter there,” said Michael Sfard, a legal adviser to Yesh Din, an Israeli organization that works on behalf of Palestinian human rights. “What’s proportional or not is a gray area, but there is black and white. No one can say that to destroy a house because there was once a military meeting of Hamas is proportional.”

Determining the legitimacy of any particular strike, or even the source of fire that destroyed a particular target, is difficult while the fighting continues. A New York Times investigation of the Jabalia incident based on interviews with two dozen witnesses, and inspection of the site and a preliminary review by the United Nations, was unable to determine precisely what transpired there. But it did find evidence that the explosives to hit the school were Israeli artillery fired from several miles away.

“We really, really, really can’t know what happened,” said Amichai Cohen, a co-author of a recent paper from the Israel Democracy Institute about international law and the current conflict. “Significant things need to be investigated. Everyone hopes civilians don’t die, but was it a legitimate decision? I don’t know. I wasn’t there.”

The key to judging these incidents, experts say, is a quick and transparent investigation. After Israel’s 2009 operation in Gaza, the United Nations did not consider initial Israeli investigations sufficient and commissioned its own inquiry. The result was the Goldstone Report, which was harshly critical of Israel and which the Israeli government rejected.

Following the IDF’s 2010 storming of a Turkish boat aimed at breaking Israel’s naval blockade of Gaza, commonly known as the flotilla incident, Israel launched its own commission of inquiry aimed both at investigating its response to the flotilla and assessing its methods of inquiry.

The commission’s report, released last year, concluded that Israel did not break international law in its response to the flotilla, but it recommended faster and more transparent investigations. The IDF, according to the officer from the legal corps, is still assessing the recommendations.

“I hope that the education and trust [the IDF] had means they’re keeping the laws, but to determine case by case takes special investigation,” Cohen said. “Whoever says they broke the laws also doesn’t know. You can’t just say they broke laws because they killed civilians. It could be they killed civilians and the civilians were very close to a legitimate military target. But it also doesn’t mean there wasn’t a violation.”