In Boston, Riverway reaches young Jews outside the synagogue 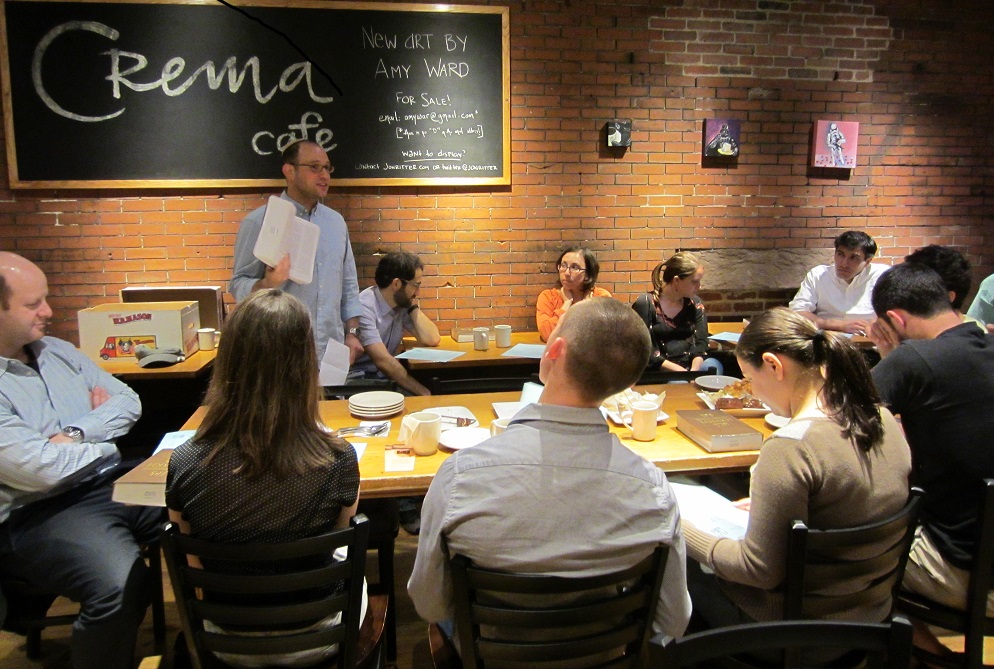 BOSTON (JTA) – One recent Tuesday evening, a group of about two dozen Jews in their 20s and 30s huddled around wooden tables poring over the text for the week’s Torah portion.

A rabbi prodded them with questions about the petition that Zelophehad’s daughters submitted to Moses to inherit their father’s estate. Why do they petition at this juncture? Why does Moses refer the question to God?

The learning session took place not in a synagogue study hall but at a bustling cafe in Harvard Square.

Welcome to Riverway Cafe, a program of Temple Israel of Boston to reach out to millennial Jews. The program is an outgrowth of the Riverway Project, which brings Jewish events to unconventional settings, like Shabbat services in bars.

“It was awesome,” said Rabbi Matthew Soffer, Riverway’s director. “There was a lot of surprise from people, like, ‘Oh, that’s Jewish? I thought it would be more awkward.’ But that’s what we’re trying to do, to normalize spiritual life.”

The Riverway Project is emblematic of Boston’s burgeoning Jewish landscape for young Jews, the most sought-after demographic these days among those concerned about the Jewish future. In Boston, Jews in their 20s and 30s have become a major focus of Jewish programming: The area has more than 70 organizations are aimed at such Jews, according to the Boston Jewish federation, Combined Jewish Philanthropies.

“Young adults are an extremely high priority for us because we think that young adults are the opportunity for the future,” said CJP President Barry Shrage. “If you’re not thinking about the next generation, you might as well shoot yourself.”

Shrage says that when he started his job in 1987, outreach to young adults was low on his list of priorities.

“We didn’t see much potential out there,” he recalled.

The Riverway Project was among the first of Boston’s unconventional programs to engage young Jews. Rabbi Jeremy Morrison of Temple Israel, which is Reform, started it in 2001 out of a belief that he needed to break outside synagogue walls and meet Jews where they were, physically and temperamentally, to engage them.

This kind of approach has become axiomatic, particularly in the Reform movement. Rabbi Rick Jacobs, president of the Union for Reform Judaism, has made it a centerpiece of his outreach efforts to unaffiliated Jews.

Though Morrison initially contemplated building a satellite synagogue in South Boston to be closer to where younger Jews were moving, he ultimately decided that “relationships trump space.”

He said, “It used to be that rabbis were hired to create programs and invite people to them. “I went into people’s homes and said let’s talk about what you want to create.”

The approach worked. Riverway events began drawing dozens of regulars, many with no previous affiliation to Jewish institutions. A sizable number ended up joining Temple Israel as members.

With Riverway’s growing success, and in response to the growing number of people returning from Birthright Israel trips, CJP began to devote more of its resources to educational, entrepreneurial and identity-building programs for young Jews.

“It’s funny because when I think about Los Angeles, New York and Boston, I think of Boston as the least Jewish,” said Andrew Oberstein, Riverway Project’s newly hired coordinator. But, he says, “I never found a 20s and 30s scene like we have in Boston.”

When Morrison resigned his post at Riverway in 2010 to become Temple Israel’s director of education, Soffer, who succeeded him, prepared for his new job by enrolling in an eight-day course on community organizing at the Saul Alinsky-founded Industrial Areas Foundation. Soffer believed that community organizing’s techniques of grassroots engagement were essential to keeping Riverway relevant to its target audience.

Soffer says he sees his role as a bridge between the institution of the synagogue and the young adults who are interested in Judaism but wary of institutional trappings.

“We’re continually trying to be a synagogue without walls,” Soffer said. “I’ll go anywhere and I’ll meet with anyone who’s curious. It entails a whole lot of creativity and a decent amount of risk. A bar is not my favorite place to pray, but we went there last year and we’re going there two times this year.”

With a CJP grant, Soffer initiated a set of ticketless, open High Holidays services at Temple Israel that brought in over 600 people last year.

Back in the Cambridge cafe, the study session wraps up and Soffer collects the study sheets. People linger, chat, munch on a final piece of muffin. Then in ones and twos, they amble downstairs and melt away in the crowd, drifting back out into the Boston summer night.