Op-Ed: The Jewish imperative to tackle climate change — and four ways to do it 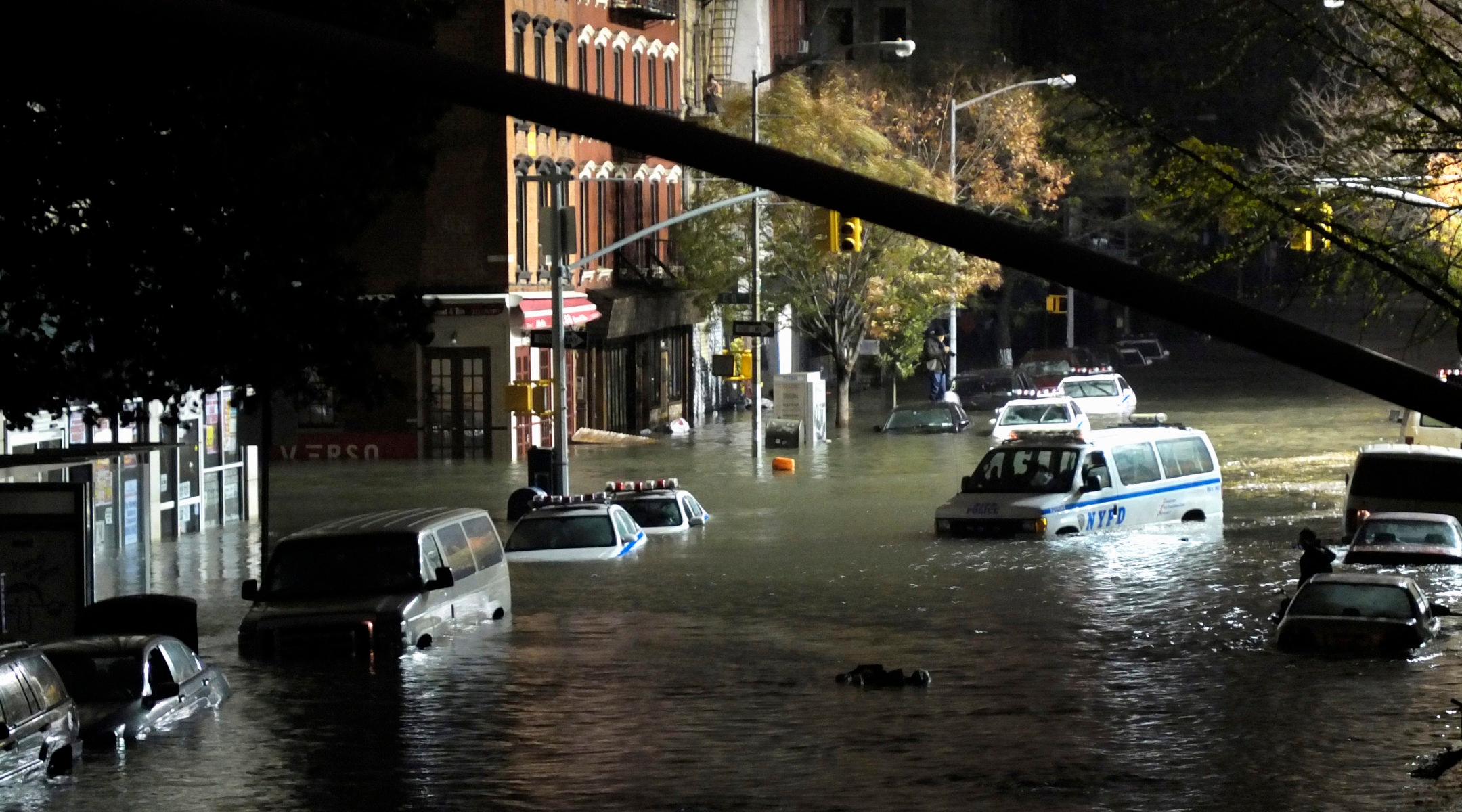 A general view of submerged cars on Manhattan streets after a tidal surge caused by Hurricane Sandy, on Oct. 30, 2012. (Christos Pathiakis/Getty Images)
Advertisement

JERUSALEM (JTA) — Two days before the U.N. Climate Summit, demonstrators, including a large multi-faith contingent — will descend on New York City to demand urgent action on climate change. The People’s Climate March, which coincides with the week of the U.N. General Assembly, is being billed as the largest climate march in history.

Sunday’s event is notably taking place in the city badly battered less than two years prior by Hurricane Sandy — the “super storm” that killed 285 people and caused tens of billion of dollars in damage to property and infrastructure.

Also remarkable: The march is happening just three days before Rosh Hashanah. This Jewish New Year is different than all past ones, for it is the last observance of Shmita — Israel’s biblically mandated yearlong farming sabbatical — before extreme climate change becomes irreversible.

PricewaterhouseCoopers recently released its latest Low Carbon Economy Index, with the damning news that the major economies are falling further behind meeting their carbon reduction goals.

All of this makes the haunting liturgy of the Days of Awe — “who shall live and who shall die” — particularly resonant.

Typhoon Haiyan in the Philippines, which erased more than 6,300 names from the Book of Life last November, was supercharged by the warming waters of the Indian Ocean and the higher sea levels due to the melting of the ice caps. Who by water. The severity of the droughts across sub-Sahara Africa threatens millions of lives. Who by thirst. Even California is suffering compromising water shortages and wildfires. Who by fire.

The economic devastation alone of climate change — prices for water, food and energy will rise for billions of people — coupled with the unprecedented loss of human life is like no other physical and moral challenge that humanity has ever faced.

Let’s not fool ourselves. We are a small people, contributing a fraction of a fraction of the nearly 40 billion metric tons of carbon dioxide that trap more and more heat in our atmosphere, creating the devastating greenhouse effect. Yet we are not without agency. Here are four things we can uniquely do as a people that can turn the tide against this global challenge.

1. Swell the People’s Climate March. There are about 2 million Jews in the New York area, so we can have a disproportionate impact at a historic inflection point. Dozens of Jewish groups, from the Shalom Center, a social action group run by Rabbi Arthur Waskow, to the Jewish environmental organization Hazon, from the Reform movement to the Jewish Council for Public Affairs, are among the 1,000-plus sponsors of this people’s climate pilgrimage.

2. Lead by example. Jewish federation and foundation endowments, with total assets of over $60 billion (according to the Milken Institute) in this Shmita year should divest from all carbon-intensive businesses, like oil, gas and coal companies. There is a similar call being led by 350.org for the Vatican and universities to divest from carbon; it should be supported. Every Jewish institution and family can calculate their carbon footprint and offset it by planting trees via the Jewish National Fund or other carbon-offset programs. Nigel Savage of Hazon challenges us “to become the first carbon-neutral people on the planet.”

3. Invest in Israel’s renewables technologies and companies so that Israel can become a global platform to solve climate change while providing a healthy return for investors. (Disclosure: I am involved with two solar companies.) Israeli companies are on the cutting edge of solar robots, inverters, energy storage and concentrators, and are uniquely qualified to manage risk to bring renewables to developing countries. And even though the environmental movement in Israel is starving for donations, we succeeded earlier this month in stopping a major questionable oil shale endeavor. This historic victory over carbon can provide an inspiration to environmental groups fighting big oil everywhere.

4. Offer hope. Recent international conferences meant to fight climate change focused more and more on how to mitigate the negative impact of climate change rather than how to beat it. With the exception of Sir David King, climate adviser to the British foreign secretary, and a handful of Jewish energy pioneers, few believe we can win the ultimate climate battle. Yet those of us who had the good fortune to grow up in the Soviet Jewry movement are very familiar with the area in front of the United Nations. We know what it means to conduct and win an unprecedented global, ethical campaign. The Jewish people are at our best when we represent the value of hope in history.

This is our gift; this is our responsibility. And time is running out.

Yosef I. Abramowitz was named by CNN as one of the six leading Green Pioneers on the planet and is the winner of a Covenant Award for Excellence in Jewish Education. He is a co-founder of the solar industry in Israel and serves as CEO of Energiya Global Capital, a Jerusalem-based developer building solar fields in Africa and elsewhere. Abramowitz is on Twitter: @kaptainsunshine.