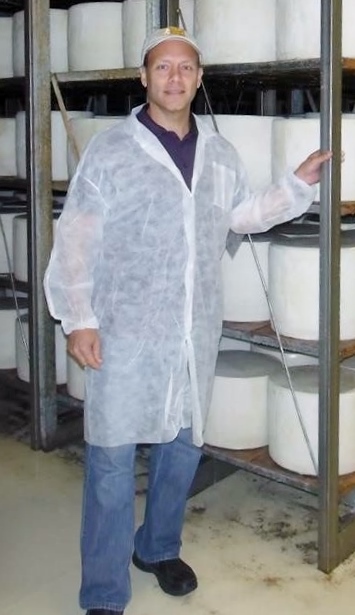 Delman and his physician wife, Patricia, plan to host a dairy lunch that features casseroles and quiches. The meal also will feature a cheese tasting with tropical fruits like guava, dates and figs.

The sharpness of the cheeses and the sweetness of the fruits make a delicious combination, he said.

What do you expect from someone who dubs himself “The Cheese Guy”?

Delman has plans, too, for the holiday’s most symbolic food.

“When you drizzle honey over the cheese,” he said, “it’s just a beautiful combination.”

Delman, 51, will be using cheeses he ages in his cheese cellar three steps below ground level in his home in Yonkers, which borders the Bronx.

He has 300 wheels and blocks of such varieties as havarti, provolone, cheddar, Swiss, gouda, Pecorino Romano and several variations of parmesan.

The cheeses he ages are certified kosher by the Orthodox Union. Those he cures in such solutions as oil, beer and wine are not yet O.U.-certified.

With the High Holidays approaching, Delman is preparing a line of Brie that he considers ideal for Yom Kippur break-fasts, when eager eaters look for what to slather on their bagels. Brie is a departure from his standard offerings of hard cheeses.

“If not for him, these cheeses – most kosher gourmet cheeses – would not be available at all,” said Gordimer, who specializes in certifying dairy products. “The face of the kosher cheese market is changing because of him.”

Delman does it all in a 500-square-foot, $50,000 refrigeration unit installed six years ago, when he decided to expand his wholesale food business.

Many of the cheeses, including non-kosher varieties, are aged and cured in Delman’s warehouse in nearby East Rutherford, N.J., but he said he likes the hands-on convenience of the home unit, for which he received a permit from the New York State Department of Agriculture and Markets.

Delman said the cool, damp conditions downstairs, even before the refrigerator’s installation, evoked the environment of caves where some European cheeses have long been aged, such as the Roquefort variety in France.

“I like involving myself in something I’m passionate about. I’m very passionate about food,” he told JTA. Making cheese is “one way to be creative” and is tradition-based – much like Judaism, he said.

“I enjoy living and practicing the best of our traditions,” said the kippah-wearing Delman, a father of four, including a 19-year-old son serving in the Israeli army.

“And since it’s in my home I’m able, six days a week, to go down and age the cheese – the French term is affinage, the process of aging cheese. I try to coax greatness out of each wheel of cheese.”

Most cheeses include rennet, an enzyme in animal stomachs that cannot be used in kosher products.

The Orthodox Union has certified 84 of Delman’s offerings as kosher, including 15 aged in the Yonkers cellar, Gordimer said. Delman’s Pecorino Romano, made from sheep’s milk on the Italian island of Sardinia, might be the only one of its kind certified by the O.U., he added.

Most of Delman’s clients are New York-area gourmet shops, supermarkets and kosher groceries. Many are not kosher observant or even Jewish.

At one Long Island store, a woman told Delman that she as a vegetarian and her Muslim husband buy his cheeses because of the certainty that they lack animal byproducts.

Delman contracts with “creameries,” or dairy farms, in New York, Vermont, Wisconsin, Ohio and California – and several in Italy – that prepare his cheeses under O.U. supervision despite not being kosher themselves.

The cheese wheels and blocks reach Yonkers relatively soft, mild and creamy. The subterranean aging process of one to two years breaks down their bacteria and molds, removes the moisture and develops the flavors and textures.

Each aged wheel or block – some weigh 60 pounds – is taken to industrial facilities and sliced into smaller, retail-sized chunks, also under strict supervision.

Neil Weiss of nearby New Rochelle said that visiting Delman’s cellar was eye- and palate-opening.

“I was impressed that you can age cheeses, in the right environment, in your house,” he said after nibbling on some Gouda, cheddar and Pecorino Romano. “I came away thinking that I could buy some really good, quality kosher cheeses.”

Last September, Yonkers Mayor Mike Spano didn’t have to buy. Last September, he received two Rosh Hashanah gifts from Delman – unusual given that he’s not Jewish — at his office.

One was cheddar cheese shaped like a shofar. The other was a wheel of Pecorino Romano that Spano said tasted like the kind he enjoyed as a child.

“I’ve got to see your cheese cellar,” he told Delman.

Mr. Mayor, one piece of advice: Bring a coat; it’s mighty cold down there!

A Jewish camp is opening — on the video game Minecraft