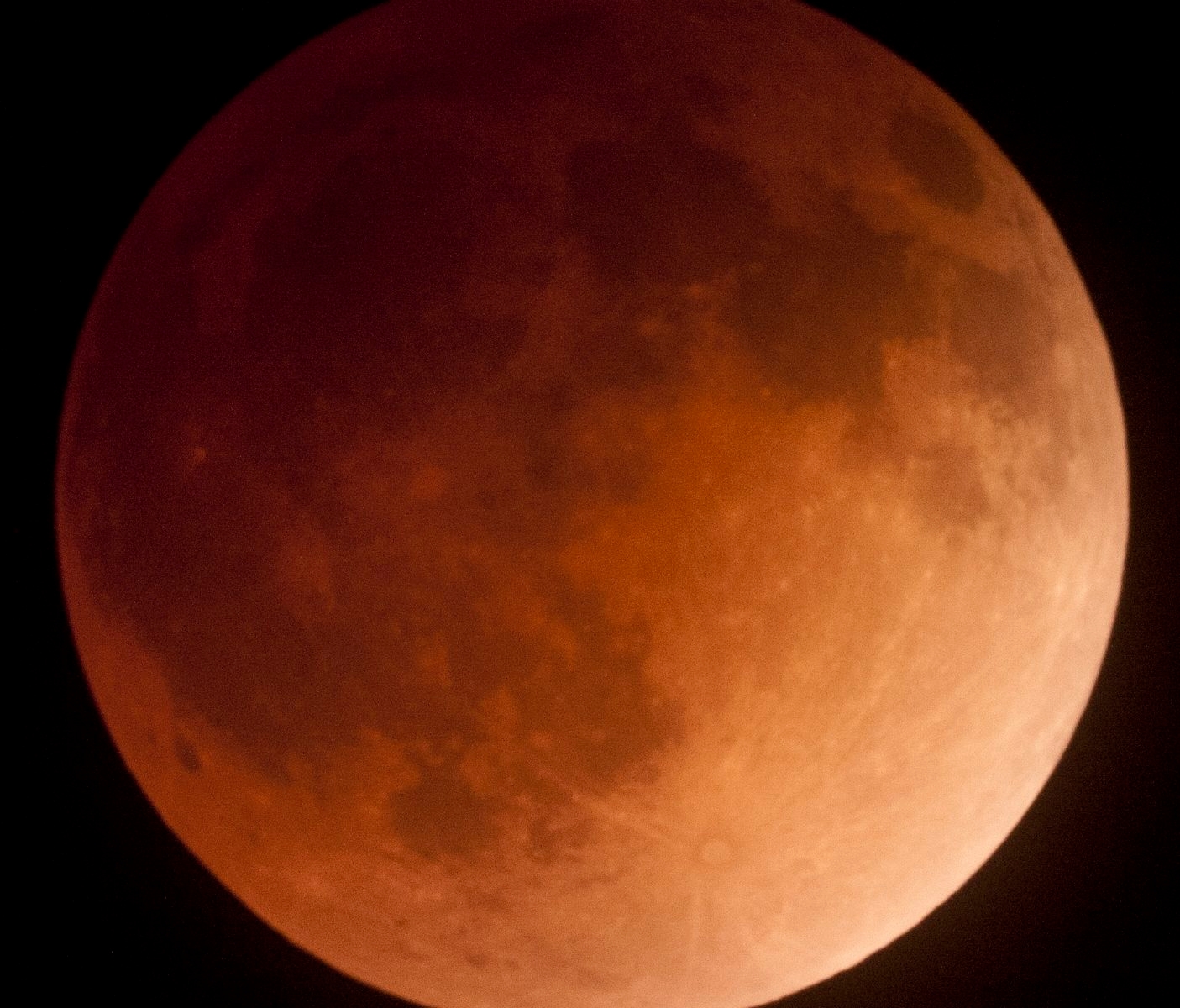 The lunar eclipse over Los Angeles on the first night of Passover, April 2014. (Anthony Cook, courtesy of Griffith Observatory)
Advertisement

LOS ANGELES (JTA) — As we usher in Sukkot, will there be a blood moon rising?

John Hagee, the San Antonio pastor who wrote the book “Four Blood Moons: Something is About to Change,” would have us believe so.

Hagee predicts that because of a cycle of four lunar eclipses called a tetrad — two this year and next on Passover and Sukkot — that something big is about to happen, like the Rapture.

During a lunar eclipse, the moon moves directly behind the earth and into its shadow.

Seeing the first so-called “blood moon” following the first night’s seder this year — it looked more like watered-down kiddush wine — did fill me with wonder. Or was that just the Four Cups talking?

So is some sort of cataclysm on its way? Should I even bother putting up my sukkah?

Jeremy Schnittman, a research astrophysicist at the NASA Goddard Space Flight Center in Maryland and an observant Jew, is putting up his, so maybe we shouldn’t worry.

“Every night when you go outside on the first night of Sukkot, it is going to be a full moon. And every lunar eclipse happens during a full moon,” he said. “On average there are two lunar eclipses every year. The chance of having a lunar eclipse on Sukkot is one in six.

“The same is true for the first night of Pesach,” he said, demystifying what at first seems like an awesome coincidence.

But what about the fact that the eclipses fall on the two Jewish holidays?

“If there’s one on Sukkot, then there’s a very high chance that there will be one on Pesach,” said Schnittman, noting that the holidays are exactly six months apart.

“There’s been a lot of hubbub about ‘Four Blood Moons’ in a row,” he added. But once the plane of the orbits of the moon and earth are aligned so that an eclipse occurs, “it’s actually quite reasonable that you are going to get them again every six months for the next couple of years before the cycle moves a little bit out of alignment.”

As for the blood-like color, which is even mentioned in the book of Joel, Schnittman explained, “Full eclipses are always red. Just like the clouds on earth turn red during the sunset, during an eclipse the full moon turns red.”

Perhaps adding a tinge of credibility to Hagee’s claim is that in the Talmud, the rabbis said that “when the moon is in eclipse, it is a bad omen for Israel, since Israel reckons by the moon.”

“That reflects a more ancient superstitious approach to Judaism and astronomy,” said Schnittman, who in graduate school studied theoretical black holes and later attended Yeshivat Hamivtar in Israel for a year.

In his book, Hagee builds his theory by lining up catastrophic events in Jewish history, like the Spanish Inquisition and Israel’s War of Independence, with lunar tetrads in 1492 and 1948.

“People are looking for patterns,” Schnittman said. “Humans are really good at it. But sometimes you find a pattern that’s not really there.

“From a historical point of view, you could close your eyes and stick your finger on a historical date in the last 2,000 years and there’s probably something inauspicious” going for the Jews, he said.

“You would think that if this were a real portent of doom for Israel, it would actually be visible from Israel,” Schnittman said. “But it’s not happening there until the middle of the day, so they are not going to see anything. None of the four of the tetrad are actually visible in Israel.

Schnittman said he’s been interested in astronomy since he was young.

“About half the gifts I got for my bar mitzvah were astronomy books,” he recalled. “They sat collecting dust on my shelf for around 10 years before I pulled them out again.”

For Schnittman, the coming lunar eclipse “isn’t a random event. You can calculate exactly when all these things happen,” he said.

“When I sit down and calculate with a piece of paper and pencil that there’s going to be an eclipse three years from now and it happens, that to me is like getting a little peek inside of God’s world.”

For some people, Schnittman said, he knows his approach “takes some of the mysticism out of it.” But “it’s exactly quite the opposite.”

“The fact that God created a world that has all these amazing events and also gave us the ability to both predict them and understand them, to me that’s exactly a very religious experience,” he said.

And what about finding the date for the next lunar eclipse on a Jewish holiday?

“In 2016, there’s one on March 23, which is probably Purim,” he said. “I’m sure people will be coming out saying something about that.”

That got me thinking about writing a book filled with dire predictions — including, of course, a hamantashen shortage. “The Purim Prophecy,” anyone?