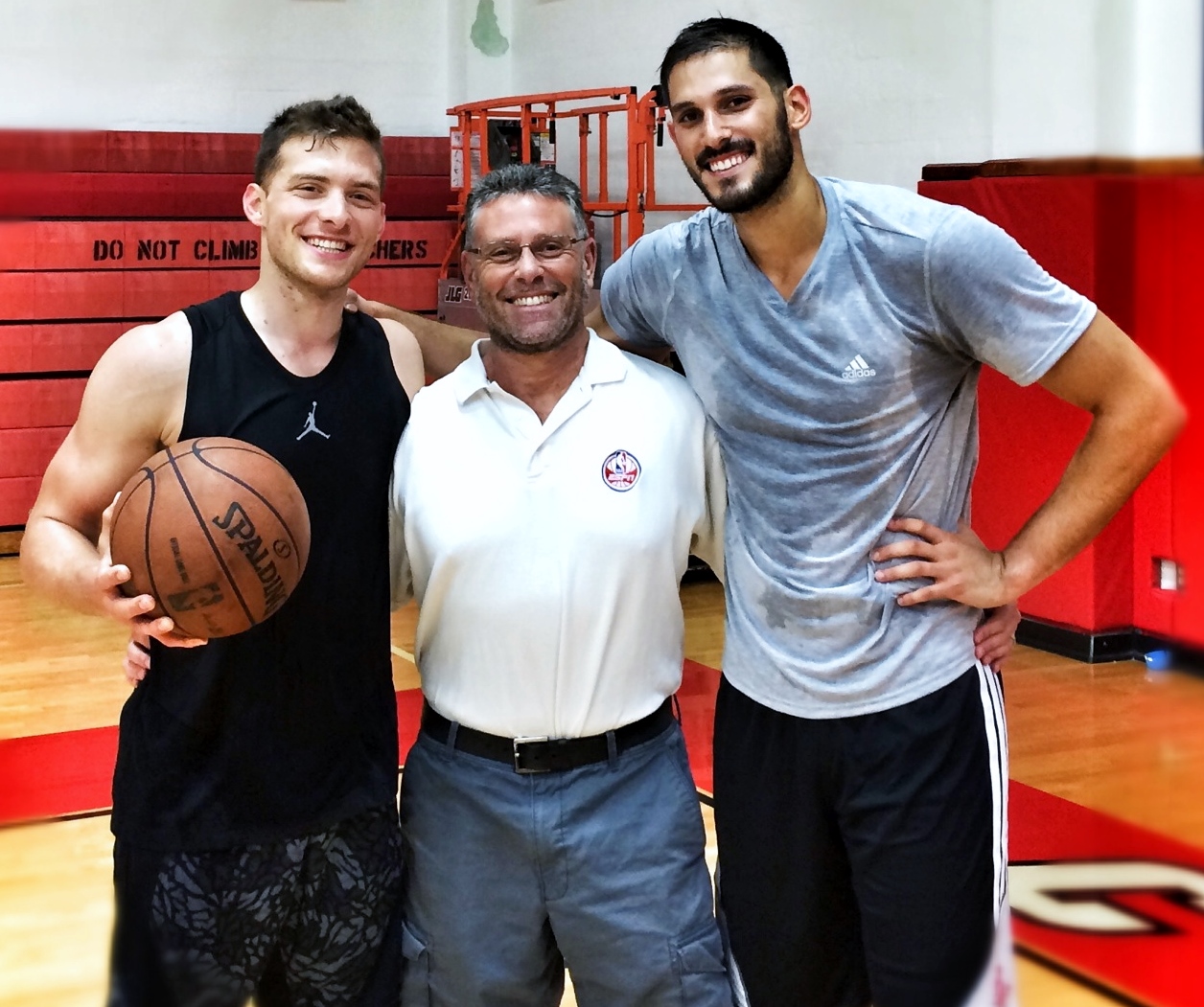 Trainer David Thorpe is flanked by two of his pupils — Israelis Gal Mekel, left, and Omri Casspi, both playing in the NBA. (Courtesy David Thorpe)

BALTIMORE (JTA) – Rodney Glasgow catches a pass, pivots, takes one dribble and lays the ball in the basket.

David Thorpe, Glasgow’s coach and trainer for a couple of weeks this summer, steps in to offer some pointers, instructing the former Virginia Military Institute guard to look up after making the catch and how to keep opponents from stealing the ball.

It’s what Thorpe has been doing for nearly three decades out of his Clearwater, Fla., base: identifying and correcting flaws in a basketball player’s game in preparation for a season and, hopefully, a pro career.

For some of his clients — the NBA roster includes Israelis Omri Casspi and Gal Mekel, as well as Kevin Martin and Corey Brewer of the Minnesota Timberwolves — the relationship extends well beyond the court.

“I get most of my pleasure by the maturing I see among the young men I’m helping, seeing them grow,” Thorpe says. “It nourishes my soul in a way that making a jump shot doesn’t.”

A stream of players flows each summer to Thorpe’s consultancy, Pro Training Center, usually through referrals by their agents or teams.

Mekel, of the Dallas Mavericks, is coming back from a knee injury suffered during his rookie season.

Glasgow has come with an eye toward landing a contract with a European team — which he would do, joining BBC Monthey based in Switzerland. It’s an achievement he credits Thorpe with having “a major part in.”

“He’s a great teacher and mentor,” Glasgow says. “He has this presence about him that is really outgoing. I could see that this person has high character. He got to know me and was really genuine.”

Thorpe, who also provides basketball analysis on the ESPN-owned website TrueHoops.com, coached at Dixie Hollins High School in St. Petersburg, Fla. — a couple of  hours from his native Seminole — before starting out on his own in 1993.

“I really consider myself a basketball coach who just helps these guys get better,” he says.

After joining Maccabi Haifa two years ago, Mekel was directed to Thorpe by Casspi. Mekel, a guard, would lead the team that season to Israel’s national championship and secure league Most Valuable Player honors.

Shortly after the Sacramento Kings selected Casspi in the 2009 NBA draft — he’s now back with the team — a club official sent him to Florida, wanting Thorpe to help improve the forward’s three-point shooting.

Haynes estimates that he’s sent eight players to train with Thorpe. With Glasgow signing in Switzerland, all have gone on to play professionally.

“Every high-level player wants to be trained by a highly skilled trainer,” Haynes says.

In one session, Thorpe corrects a problem with Glasgow’s shot — more precisely with his mechanics.

Thorpe “was telling me certain tricks so I’d have a higher percentage of making the shot,” in so doing “breaking the game down at a pro level [in a way] that I never received” from coaches in college, says Glasgow, a Washington-area resident.

“That right away did it for me. I knew I was in the right hands. It told me his IQ level was so high.”

By their second week together, the new habit was second nature and “I was shooting much better,” Glasgow says.

He also watched Martin and Casspi working out simultaneously, ingesting “every little thing.”

“David would say it and Kevin would show it,” Glasgow says.

Martin, a guard who first trained with Thorpe as an incoming sophomore at Western Carolina University, is now a 10-year NBA veteran — and has returned every summer.

Thorpe immediately broke his tendency to settle for jump shots, stressing the importance of “getting to the hole and drawing contact,” Martin tells JTA while vacationing in Hawaii.

“I think he knew my calling card was going to be putting the ball in the basket,” says Martin, who has done just that, possessing a 17.9 points-per-game average in the NBA. “He believed in me and saw the traits I have to be successful.”

Thorpe’s work doesn’t end in the summer. In season, slumping players will contact him. After bad games, too.

“When you need me, when you have a bad game, you have to call me,” Thorpe says he tells them.

Thorpe and his assistant, Ryan Pannone, will review game film to hone in on mechanics and identify solutions.

“I tell the guys, ‘I’m just going to be a mirror, reflecting who you are. I’m not going to say you had a good day when you didn’t,’ ” Thorpe says.

He stays close to his charges personally, too. Mekel and Martin attended the recent bar mitzvah of Thorpe’s son Maxwell; Mekel received an aliyah during the Torah reading.

Martin says of Thorpe, “He’s just a guy I could trust. With David I felt the trust and loyalty would always be there.”