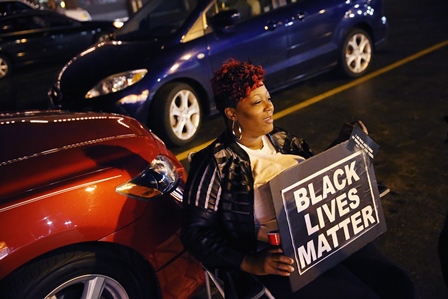 MINNEAPOLIS (JTA) — Early last week, national faith leaders called rabbis, pastors, priests and imams to Ferguson, Mo., a city rife with racial violence and pain. Along with my rabbinic colleagues from Truah: The Rabbinic Call for Justice, I responded to the call to the people of Ferguson that their struggle for justice is a timeless spiritual struggle. I went with the intention of teaching protesters and police alike a new path for justice, a promise of racial healing.

I realized I had the wrong idea: This wasn’t about clergy teaching anyone anything but about our bearing witness to a movement. After 18-year-old Michael Brown’s death at the hands of a police officer, the youth of Ferguson are demanding that he, and they, not be forgotten.

We rabbis went to Ferguson to hold ourselves accountable. We participated in an interfaith prayer service calling upon community leaders to advocate for racial justice; we stood before the Ferguson police station demanding that they, and we, atone for standing idly by when Michael Brown and so many other young people of color are harassed, jailed and killed. We left the sukkot in our home communities, eschewing comfortable meals and the joy of the festival, and went to Ferguson to build a different sort of sukkah: a sukkat shalom, a “shelter of peace.”

Here is what we learned:

Our children are angry. They are angry that young men of color like Michael Brown are being shot on our streets. They are angry that police caused Brown further indignity by leaving his body in the street for 4 hours and 32 minutes, forcing parents to hide their children’s eyes. They are incensed that even in death, the police did not show his corpse that modicum of dignity.

Our children are hopeful. They believe that with the power of their voices, the gathering of their feet and the sacred work of their hands, they can bring about justice and dignity for all people in this nation.

Our children are righteous. As we stood in front of the police station at Ferguson, one young African-American woman stood face to face with a police officer in riot gear, a sign in her arms held high: “Black Lives Matter!” She testified to him, staring deeply into his eyes: “What you all did to Michael Brown makes me want to hate you. But I won’t have hatred in my heart. I will only have love. And I know you all want to repent for what you’ve done, for creating a system that lets my sisters and brothers of color die. I won’t hate you. I want to hug you.” And she did. With fierce tears, she treated that officer like a human being. And she asked — she demanded — that her humanity be seen.

Our children are capable. I thought they needed the rabbis and ministers and imams and priests who came to Ferguson to “show them the way” to make justice happen. But they don’t need us to do it for them. They need us to amplify their holy work, to bear witness to their righteous anger and their anguish and their longing to be treated with compassion and with dignity and affection.

Our children are impatient. After all, they are children. They should be dreaming of a world unfolding in front of them. They should be impatient with how they’ve been treated. What does it say about us when we ask them to be patient?

And finally, our children are here. Did we need to show up and stand for 4 hours and 32 minutes in the pouring rain to face off with police officers in riot gear? We did. We did so to show that this movement is for repentance: for the police who fail to serve and to protect; for all of us who have allowed this to happen; for each one of us who needs to commit to the hard work of dialogue and social change.

What the mainstream media show are neighborhoods in chaos. What we saw were young people full of passion, skill and moral courage demanding that America live up to its national promise: that we are all created equal, that dignity is not for some of us but for all of us.