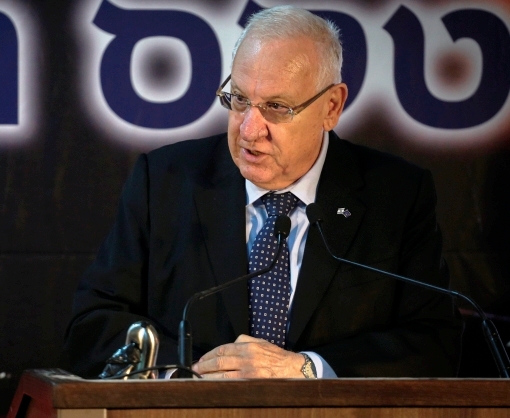 President Reuven Rivlin, shown speaking on Oct. 23, 2014 at the dedication of a Jerusalem road named for Yitzchak Shamir, says the relationship between Jews and Arabs in Israel "has reached a new low.” (Hadas Parush/Flash90)
Advertisement

TEL AVIV (JTA) — Israel’s president fills a largely ceremonial role — meeting with foreign dignitaries, representing the government at state funerals and other official gatherings. But the office’s new occupant has embraced a challenge not inherent to the job: curbing what he sees as an epidemic of anti-Arab racism.

“Israeli society is sick, and it is our duty to treat this disease,” Reuven Rivlin, 75, told a group of Israeli academics on Sunday.

The Likud party elder statesman has been Israel’s most vocal politician in recent history on issues of racial discrimination and violence within the Jewish state. And he’s taking on the issue at a particularly challenging moment, when as he explained in his speech, “the tension between Jews and Arabs within the State of Israel has risen to record heights, and the relationship between all parties has reached a new low.”

Of Israel’s population of some 8.9 million people, about 20 percent is Arab.

Strong condemnation of anti-Arab racism in Israel is generally the province of the country’s Arab and left-wing politicians. So Rivlin, who opposes Palestinian statehood and advocates annexing the West Bank, does not seem like an obvious candidate to take up the cause. But despite his position on the two-state solution, the president has a reputation for defending civil liberties and minority rights within the land that Israel controls.

Rivlin took office in July — as the war between Israel and Hamas intensified and just weeks after three Jewish extremists captured and burned alive a Palestinian teen. The teen’s murder was a revenge attack for the kidnapping and deadly shooting of three Israeli teenagers in June.

But nearly two months after a cease-fire was declared, Arab-Jewish tensions have not waned. Last Tuesday, Jewish extremists burned a West Bank mosque, damaging prayer books and rugs. The same day, reports emerged of three Jewish brothers beating a Palestinian construction worker. And the following day, Arab protesters at the Temple Mount injured three policemen in riots that continued across Jerusalem throughout the week.

Then on Sunday, dozens of Jews moved into buildings overnight in the eastern Jerusalem neighborhood of Silwan, the second such move into the primarily Arab neighborhood this month. The next day, Arabs threw firebombs at the building in protest.

Rivlin has also called for an end to racism in high-profile TV appearances, in Facebook posts and at a recent dedication ceremony for a Jerusalem road bearing the name of the late Israeli Prime Minister Yitzhak Shamir. And he made headlines last month when he notably recorded a video with an 11-year-old Arab-Israeli, George Amira, who had endured homophobic bullying at school. In the video, which went viral, Rivlin and George sit side by side in silence, holding up sheets of paper that call for an end to “violence, hostility, bullying, racism” in Israel.

“He said I was a courageous kid,” George told JTA. “He said he has friends who don’t have that courage.”

Former Likud minister Dan Margalit, who grew up with Rivlin in Jerusalem and served alongside him in Knesset, told JTA that Rivlin’s anti-racist activism stems from a commitment to traditional revisionist Zionism. The ideology espouses Jewish sovereignty over the Land of Israel, including the West Bank, as well as democracy and minority rights for Israel’s Arab citizens.

Although he supports Israeli annexation of the West Bank, the former longtime Knesset member broke with his party by opposing a 2010 law that criminalized boycotts of goods produced in Israeli settlements. The same year, Rivlin attempted to block the Knesset from stripping an Arab-Israeli lawmaker of her parliamentary privileges as punishment for participating in the flotilla operation to break Israel’s blockade of the Gaza Strip.

“Ruvi stayed the course,” Margalit said, using Rivlin’s nickname. “Racism is one of the worst attitudes and crimes you can think of. We were persecuted and killed by racists for generations, so to think there would be racism in our country is horrendous.”

Because Israel’s presidency is ceremonial, Rivlin’s power to advance policy changes is limited. Case in point: His predecessor, Shimon Peres, had little impact on Israeli government policy toward the Palestinians despite constantly calling for Israeli-Palestinian peace during his term.

On the issue of racism, the Israel Democracy Institute, a think tank that researches Israel’s democratic institutions, is developing a curriculum to teach tolerance and pluralism. It is also setting up a task force to review existing anti-racism laws in Israel.

Mordechai Kremnitzer, the institute’s vice president of research, met with Rivlin on Sunday and is optimistic that the president will endorse its initiatives.

Activists for Arab-Israeli rights told JTA that racism demands forceful action from Israeli lawmakers. But some said they appreciate that Rivlin is raising an issue that had been largely ignored and feel he is creating a more conducive atmosphere for coexistence.

“The Arab public finds itself in despair from the amount of racist incitement and racist attitudes that exist,” said Jafar Farah, chairman of Mossawa, an organization that advocates for Arab-Israeli rights. “When suddenly Rivlin’s voice rises, people say maybe there’s a chance. Maybe we can live a shared life in this state.”