From the Archive: The funeral (and TV movie) of Klinghoffer 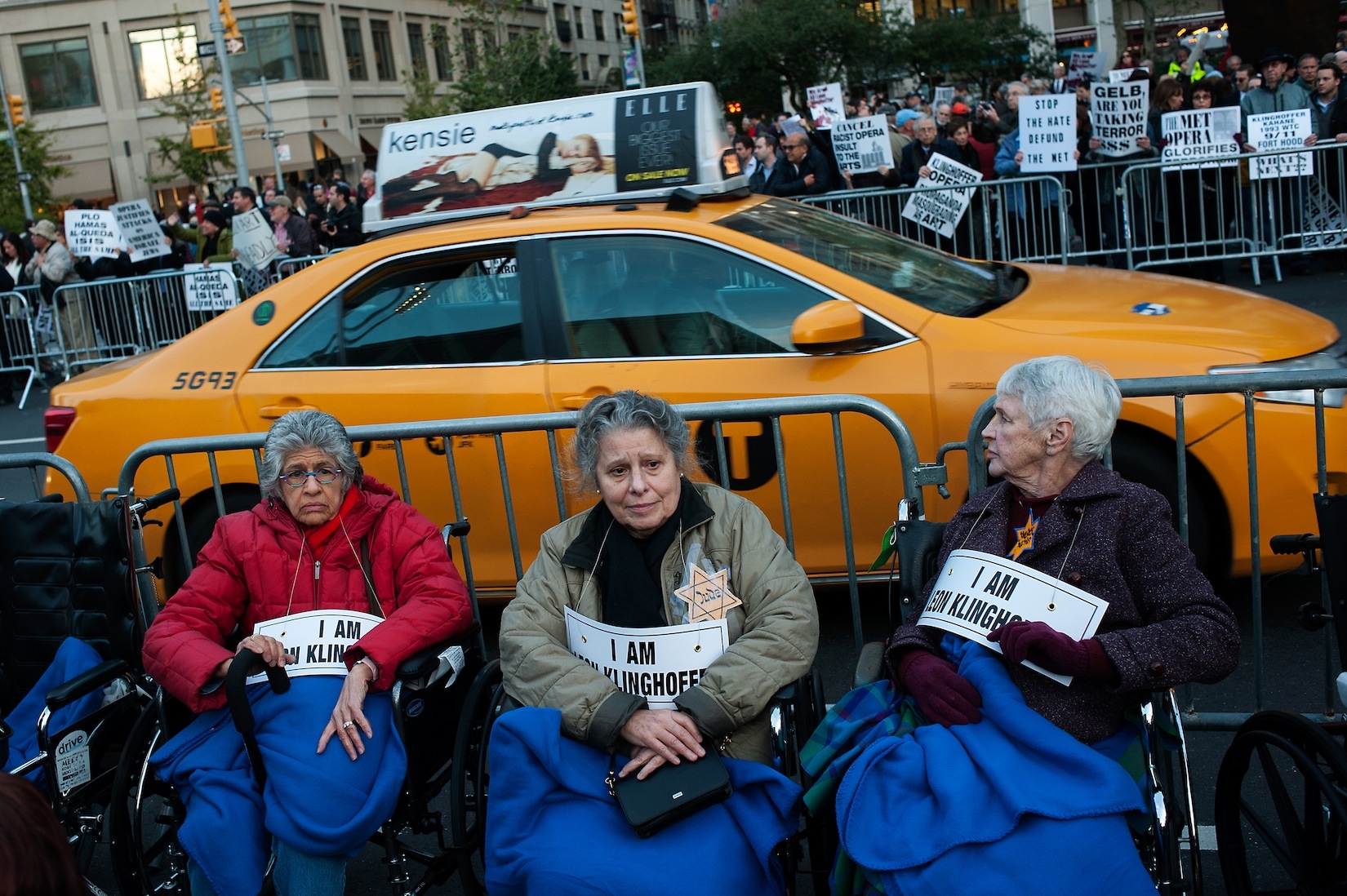 Protesters sit in wheelchairs outside the Metropolitan Opera at Lincoln Center on opening night of the opera, "The Death of Klinghoffer," Oct. 20, 2014 in New York City. (Bryan Thomas/Getty Images)
Advertisement

Last Monday, amid much criticism and controversy, “The Death of Klinghoffer” opened at New York’s Metropolitan Opera.

On two separate occasions before the curtain rose, thousands gathered outside the Met to protest its staging of the opera, which they argued is too sympathetic to the Palestinian hijackers who murdered the 69-year-old wheelchair-bound Leon Klinghoffer on the Achille Lauro cruise ship in 1985.

It was Klinghoffer’s real death, however, not his staged one, that first drew a crowd in the thousands. On Oct. 22, 1985, more than 1,000 people crowded into Temple Shaaray Tefila, a Reform congregation on Manhattan’s Upper East Side, to attend Leon Klinghoffer’s funeral.

Inside the sanctuary of Shaaray Tefila, Klinghoffer’s story was told quite differently than it would be years later in an opera house less than three miles away.

His daughters Lisa and Ilsa, who in an op-ed last week declared the opera “an injustice to our father’s memory,” both spoke at the funeral, calling their home a “refuge” where they played the piano, sang, and celebrated the Jewish holidays with joy. Ilsa said, “Oh, Daddy, you worked so hard and never complained.”

Maurice Blond, a childhood friend, recalled to the assembled that Klinghoffer “wouldn’t take guff from anybody”:

He said that when Klinghoffer, who stood 5 feet 8 inches, served in the U.S. Army during the war and a non-Jew of six feet five inches called him a derogatory anti-Semitic name, Klinghoffer took him on. The soldier “broke his jaw and made him deaf in one ear.”

“He struggled with his paralysis,” said Blond. “He refused to lie down and become a cripple.”

Interestingly, while the daughters have repeatedly objected to the operatic dramatization of their father’s murder, Marilyn Klinghoffer “sought to sell the rights of her and Leon’s story of the Achille Lauro hijacking to a production company for a television docu-drama,” JTA reported soon after her death.

Though Mrs. Klinghoffer at first resisted appeals from magazines and film makers for her husband’s story, she agreed recently to sell it to an independent production company for a film or television docudrama, said Jay Fischer, a family lawyer. He declined to discuss the terms.

Mrs. Klinghoffer made the agreement, [a friend] said, ”because she felt the story was important enough to be told, and to make sure this world recognizes the need to eradicate terrorism.”

It is not clear which TV movie — “The Hijacking of the Achille Lauro” (1989) or “Voyage of Terror: The Achille Lauro Affair” (1990) — was the result of the agreement. Despite the latter film’s high-profile movie stars, Burt Lancaster and Eva Marie Saint, neither production generated anywhere near the hype of “Death of Klinghoffer.”