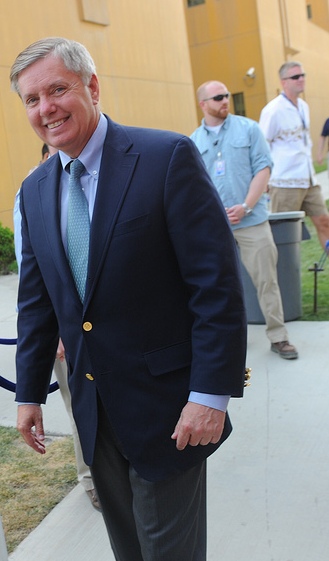 WASHINGTON (JTA) — The incoming Republican majority in the Senate will advance a bill that would subject any Iran nuclear deal to congressional review, a top senator said.

“If there is a deal, if it is a good deal, I will go for it,” Sen. Lindsey Graham (R-S.C.) said Saturday at the inaugural conference in Washington of the Israeli American Council.

“If it is a bad deal, I will kill it,” said Graham, who as chairman of the foreign operations subcommittee of the incoming Senate’s Appropriations Committee will wield considerable power in foreign policy. He said his bill would be cosponsored with Sen. Bob Corker (R-Tenn.), the incoming Foreign Relations Committee chairman.

The Obama administration, with the outgoing Democratic Senate majority, until now has managed to minimize Congress’ influence on the talks underway between Iran and the major world powers. Nov. 24 is the deadline for a nuclear deal, and American negotiators in recent weeks have sounded more optimistic about achieving an agreement.

Graham alluded to frustration until now by most of the Republican caucus and some Democrats at the Democratic leadership’s refusal to bring to a vote enhanced sanctions legislation that the White House had opposed.

“In January of next year, we’re going to stop talking and start voting,” he said.

Graham’s remarks earned cheers from the audience at the conference. The Israeli American Council seeks to advance the interests of Israeli Americans within the Jewish community and more broadly.

“We don’t merely want to prevent Iran from developing a nuclear weapon today, we want to make sure that Iran does not have the capability to build a nuclear weapon tomorrow,” Dermer said. “And we believe that goal is achievable by keeping strong sanctions and other pressures, and only reducing those pressures when Iran fully dismantles its nuclear weapons capability.

“A deal that removes those sanctions and leaves Iran’s nuclear program essentially intact is a bad deal as far as Israel is concerned.”

U.S. and other nations’ officials have said that a nuclear deal with Iran will likely allow Iran to continue enriching uranium at minimum levels, with a tough inspections regime in place, but Israel believes any enrichment capacity leaves Iran as a nuclear threshold state.

“The idea that instead of dismantling Iran’s nuclear weapons program, and intelligence and U.N. inspectors will do the job, does not give Israel much comfort,” he said.

Dermer spent a considerable portion of his speech pushing back against the notion arising out of a series of recent diplomatic disputes that U.S.-Israel relations were at a nadir. He listed disputes going back to 1948 with other administrations that were seen as pro-Israel and praising the Obama administration’s “unprecedented” levels of military and intelligence cooperation with Israel.

Mitt Romney, the GOP presidential candidate who was defeated by Obama in 2012, opened the conference Friday with a blistering criticism of Obama in the light of the revelation that the president wrote Iran’s supreme leader a letter saying that any U.S.-Iran cooperation on combating Sunni Islamist extremists was contingent on a nuclear deal.

“That the president would write a letter of this nature, in effect legitimizing a nation and a leadership that is violating international norms and is threatening the world, is so far beyond the pale, I was stunned. I was speechless,” Romney said. “The right kind of approach in dealing with Iran is that we consider them a pariah, their leaders are shunned and we exert that kind of moral suasion on them.”