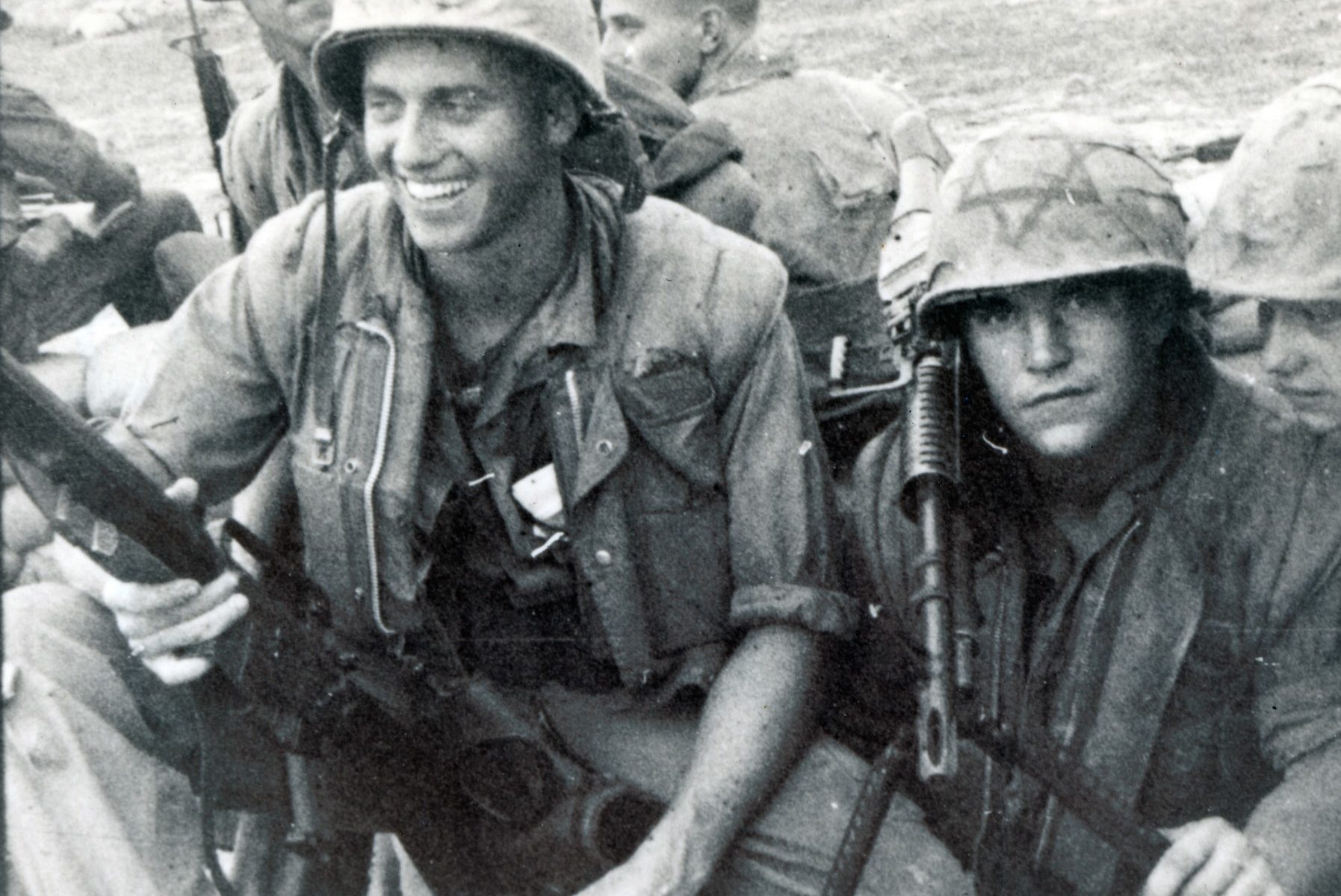 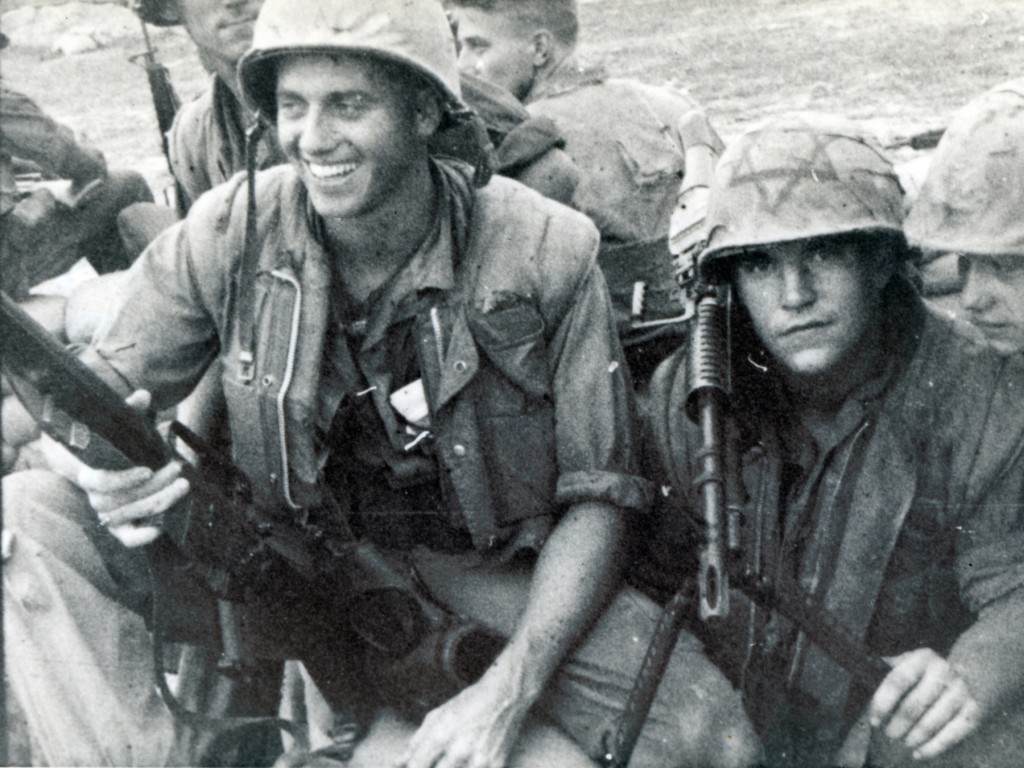 A U.S. Marine in Vietnam features the Magen David on his helmet, circa 1968 (Courtesy National Museum of American Jewish Military History)

WASHINGTON (JTA) – Mementos of Jacob Goldstein slide across the 3-foot-by-4-foot horizontal screen like cards being dealt at a casino: his photograph, his name, an Operation Urgent Fury headline denoting the 1983 military campaign in Grenada, Goldstein’s explanatory text summarizing his role during the invasion.

Even more striking than the photograph showing the uniformed rabbi wrapping tefillin on the Grenada beach with his rifle resting atop a mound of sandbags is his recollection of going from Lubavitch disciple in Brooklyn, N.Y., to a U.S. Army officer and chaplain attaining the rank of colonel.

Goldstein is among the dozens of individual soldiers whose stories are told in an exhibition that opened Tuesday at the National Museum of American Jewish Military History.

Titled “Jews in the American Military,” the exhibit engagingly conveys the role of American Jews in defending their country, from Asser Levy’s being granted the right to bear arms in 1657 to help protect Manhattan, to the 55 Jewish men and women killed in this era in Iraq and Afghanistan.

The interactive digital table from whence Goldstein emerges is dubbed “Service Around the World.” Pull up a chair, select a decade since the Cold War began in 1945, tap any dot arising across the map and learn about the American military’s involvement in conflicts, events and humanitarian missions. Many items include individuals’ stories. Others, like the peacekeeping force that President Reagan dispatched to Lebanon, do not, but curators hope that Jewish veterans will write in with information that can be added.

Elsewhere, the exhibit presents compelling text, photographs and artifacts in chronologically ordered sections. Display cases present such Jewish gems as medals from the Civil War and the Spanish-American War; an 1899 prayer book; a captured German rifle from World War II; a Torah ark that a Chinese officer fashioned from teak as a gift to Morris Gordon, whom the officer had befriended after saving Gordon from drowning during World War II. (Gordon would use the ark while conducting services on the legendary Burma Road.)

Nearby, from Guam, is the coconut that Seymour Silverman mailed to his daughter Maurita – writing her name, their Portsmouth, Va., address, and a sketch of a palm tree on the fruit itself. Maurita Silverman would follow her father into the military, serving as a nurse in the Vietnam War, according to museum archivist Pamela Elbe.

“Jews in the American Military” is a permanent exhibition that took eight years to develop at a cost of $750,000. The funding was raised by Jewish War Veterans of America groups and from the national office of JWV, an affiliate of the museum, with which it shares its brick DuPont Circle building.

While the museum has mounted exhibitions on such themes as Korean War service and females serving in World War II, it has never presented a comprehensive look at the Jewish presence in the U.S. military from the start to present day, said museum coordinator Mike Rugel.

Drawing on figures supplied by the National Jewish Welfare Board, which tends to the needs of Jewish soldiers, JWV and museum officials estimated, for example, that some 10,000 Jews fought in the Civil War, 225,000 in World War I and 550,000 in World War II.

Contemporary membership numbers for JWV are modest, however, as older veterans are dying and the number of Jewish enlistees dropped once the compulsory draft was lifted following the Vietnam War. The organization now has 20,000 members, mostly World War II veterans, according to Norman Rosenshein, its treasurer.

To remain viable long term, JWV is recruiting returnees from Iraq and Afghanistan while offering free membership to the 20,000 Jewish soldiers now on active duty.

Poor outreach seems to stand in the way, however. JWV’s national chief of staff, Marsha Schjolberg, provided a telling example.

When Schjolberg’s daughter, who works at the nearby Jewish Community Center of Greater Washington, sought to publicize a talk on this Veterans Day by a Jewish author of a new book on military heroism in Iraq and Afghanistan, a local JWV post refused to help promote the event. Indeed, said Schjolberg, a San Diego-area resident who served in the Naval Reserves for 28 years, she didn’t learn of JWV’s existence until after she had retired.

Her late father, Harold Fuchs, a World War II veteran, lived just 10 blocks from a JWV post near Los Angeles and would eagerly have participated in the organization had he known about it, she said.

Schjolberg said she hopes the exhibit helps inform non-Jews of the notable contributions made by this one ethnic segment of America.

The exhibition abounds in examples. Col. Teddy Roosevelt, the exhibit text states, held his Jewish soldiers in high regard and became a member of the Hebrew Veterans of the War with Spain, a precursor to JWV. A photograph shows Murray Blum, killed on Dec. 3, 1943, after rescuing a Merchant Marine shipmate when a German U-boat torpedoed their vessel.

Then there’s Col. Gerald Fink, a Korean War fighter pilot shown in his plane, “Big G” chalked on its door. The plane was shot down in 1951, and Fink was tortured as a prisoner of war. He passed his time woodworking and, using shattered glass and an improvised knife, sculpted a 3-foot crucifix memorializing Father Emil Kapaun, a Catholic chaplain and fellow American POW.

“Surely, the crucifix made by a Jew for a deceased priest in a Communist prison camp is unique,” the exhibition’s text states. “It was a point of pride for Col. Fink until his death in 1987.”

(The National Museum of American Jewish Military History, at 1811 R Street, N.W., in Washington, is open 9 a.m. to 5 p.m. Mondays to Fridays, and by appointment on Sundays. It is closed on Jewish and federal holidays.)