LOS ANGELES (JTA) — Henry Koster had a long and successful career in Hollywood, directing a string of hits from the 1930s through the 1960s, including “Harvey,” the comedy classic that paired Jimmy Stewart with a 6-foot invisible rabbit. But perhaps the most important film Koster ever made was also his least famous.

Koster’s “From Europe to Hollywood I,” a home movie he shot in 1936, followed his journey from Hegyeshalom, Hungary, to Los Angeles. For Koster the trip — across Europe, the Atlantic and America alongside his wife and several friends — was the difference between life and death.

Displayed near the entrance to the new exhibit “Light and Noir: Exiles and Emigres in Hollywood, 1933-1950” at the Skirball Cultural Center here, Koster’s filmed travelogue serves as a pattern for the display. 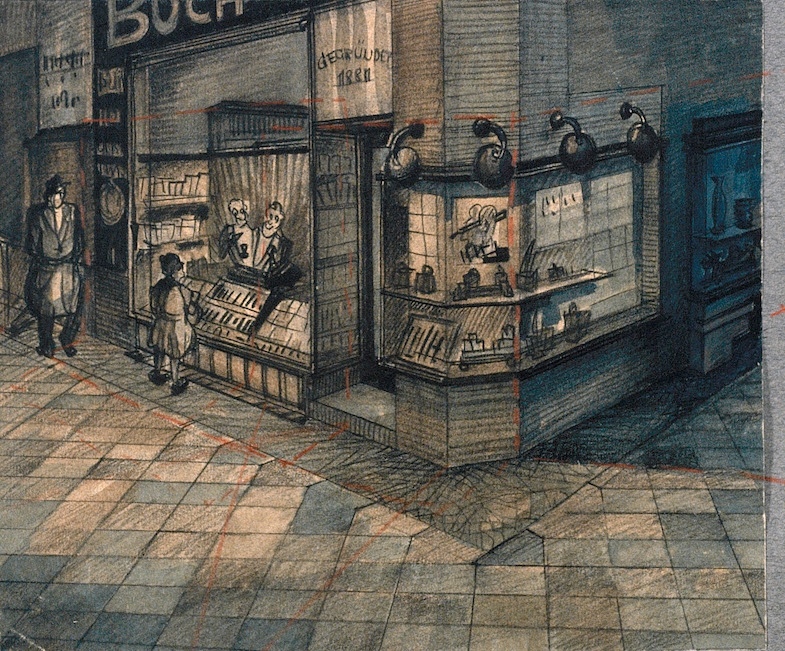 The show follows a cohort of European filmmakers, many Jewish, who fled the rise of Nazis and made their way to safety — and in some cases fame and prosperity — in Hollywood. Indeed, along with compatriots who had made the journey before them, these filmmakers helped to redefine Hollywood movies. And the exhibition — filled with posters, movie clips and costumes — bears testament to the fruits of their wildly successful labors.

Ernst Lubitsch, a German Jew whose departure from Europe predated the Nazis, became famous for comedies that displayed the “Lubitsch touch” — a blend of humor, sophistication and witty sexual innuendo that managed to managed to skirt the Hays Code’s stringent limits on prurience. Fritz Lang (of Jewish heritage, though raised Catholic), molded urban crime movies that combined psychological darkness with a play of light and shadow that helped give birth to the name of a new genre: film noir.

Yet in the films, and to be sure the lives of the emigres, darkness and light layered and intermingled in complex, even paradoxical ways. As the exhibition text by curator Doris Berger notes, “Comedies of that era tend to have serious sides to them, while the dark thrillers often have comedic touches. Using similar motifs — such as people with troubled identities or deceptions that create misunderstandings — comedy and film noir are two sides of the same coin.”

The virtuoso of marbling dark and light was the writer-director Billy Wilder, an Austrian Jew who fled Berlin for Hollywood, where he became a Lubitsch protege and then a master filmmaker in his own right. Thus Wilder could set the 1947 comedy “Foreign Affair” in the ruins of postwar Berlin (incorporating actual footage of the bombed-out city) while opening the Gothic Hollywood drama “Sunset Boulevard” with the wry voice-over of a dead man floating face down in a pool.

By the same token, when Lubitsch made the anti-Nazi film “To Be or Not To Be,” he did so as a comedy about a troupe of actors in Poland who dress as Nazis to escape. When the father of lead actor Jack Benny saw his son, an American Jew, dressed onscreen as a Gestapo officer, he left the theater in disgust.

“There’s a naughtiness to it, a wry sensibility that gives it more richness,” said the exhibit’s assistant curator, Linde Lehtinen. “The way that ‘To Be or Not To Be’ is structured, with layers of identity switching and actors playing Nazis, pulling your feelings both ways, so that you don’t know whether to laugh or to cry — so satirical and sharp — it almost feels wrong at first, but it’s so clever.”

The same masquerade quality was reflected in other movies, too.

“Casablanca,” a film of exile, was made with a cast of real-life exiles whose accents lent the movie authenticity and texture. The movie’s lead villain, the Nazi Major Strasser, was played by Conrad Veidt, a staunch Nazi critic who had fled Germany with his Jewish wife. Martin Kosleck, another anti-Nazi actor, played propaganda minister Joseph Goebbels five times, including in Hollywood’s first anti-Nazi film, “Confessions of a Nazi Spy.”

The emigres’ influence was more obvious in the creation of film noir, the name subsequently given to the sinister tales of urban crime and corruption that became a hallmark of the 1940s and early ’50s. (Serendipitously, one can explore these roots across town at the Los Angeles County Museum of Art’s simultaneous exhibit, “Haunted Screens: German Cinema in the 1920s.”)

In the 1920s, German Expressionist filmmakers such as Lang used visually distorted sets, unusual camera angles, and dramatic contrasts of light and dark to convey the mental turmoil of their characters. This focus on psychological torment and the stark, angular play of light and shadow later became key elements of noir.

But while the Expressionists made Berlin an international center for cinematic creativity, the rise of the Nazis in the early 1930s led many pioneering filmmakers to flee. Lang, despite his Jewish roots, was offered a top position in the German film industry by Goebbels but chose to flee instead. Others like Wilder, Lorre, Koster, composer Kurt Weill and many more followed suit. In the wake of their departure, other German filmmakers, such as Leni Riefenstahl, focused their talents on creating Nazi propaganda movies.

Hollywood, of course, was already a Jewish town by the early ’30s. Studio titans such as MGM’s Louis B. Mayer, Paramount’s Adolph Zukor and the Warner brothers were Jewish (a fact that they were famously reluctant to advertise for fear of anti-Semitic backlash). And as Hollywood grew, its riches and opportunities lured European filmmakers as well. When the Nazis came to power, some of the established Hollywood players worked to bring over their fellow countrymen. Universal’s Carl Laemmle, in particular, devoted himself to helping hundreds of Jewish refugees secure immigration visas and work stateside.

But many who came to Los Angeles remained outsiders. Jewish emigres would gather for salons at the homes of hostesses like Salka Viertel — the exhibit contains recordings of songs sung at one such gathering — and found solace there with others who shared their culture and knew firsthand what the Nazis were destroying.

Yet even this temporary respite didn’t last, as the American fight turned from fascism abroad to communism at home. The exhibit ends in 1950 — at a time when a number of the emigres were being singled out by the House Unamerican Activities Committee for allegedly having communist ties. Some were blacklisted; a few, like film composer Hanss Eisler, were even deported. Others left on their own accord.

For them, California’s light of hope and possibility had gone out, and they were cast back into the darkness.