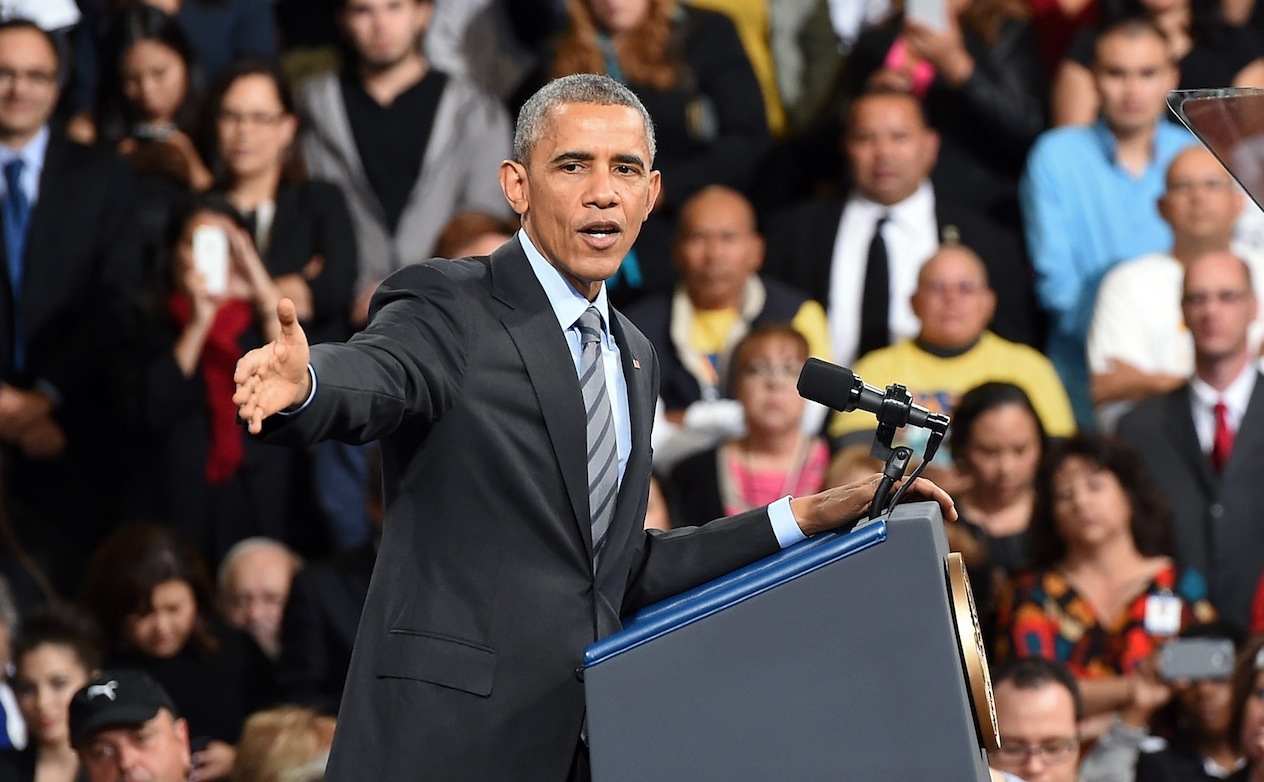 WASHINGTON (JTA) — President Obama did not mention Jews once in his Nov. 20 speech announcing immigration reforms, but he ended with a flourish that would be immediately recognizable to anyone who has sat through a Passover seder.

“Scripture tells us that we shall not oppress a stranger, for we know the heart of a stranger — we were strangers once, too,” Obama said in a live address from the White House in which he announced changes aimed at addressing the plight of millions of undocumented immigrants.

“My fellow Americans, we are and always will be a nation of immigrants,” Obama said. “We were strangers once, too.”

Obama’s biblical invocation resonated with many of the Jewish organizations that have praised his initiative in the face of sharp criticisms from congressional Republicans, who have accused the president of executive overreach.

“The president pointed to one of the core biblical basics, to welcome the stranger,” said Barbara Weinstein, the associate director of the Reform movement’s Religious Action Center here. The precept, she said, “is mentioned more than any other in the Torah.”

Obama took a relatively narrow action last week, delaying the deportation of parents of legal U.S. residents for at least five years and extending an earlier order granting legal status to illegal immigrants who arrived in the United States as children to those who arrived prior to Jan. 1, 2010. Additionally, undocumented immigrants who have been recognized as being exempt from deportation will be able to travel out of the United States and return unhindered.

The actions, which are believe to impact some 4 million to 5 million undocumented immigrants out of a total undocumented population estimated at 12 million, do not directly address the immigration issues that have traditionally exercised Jewish groups, among them refugees from religious persecution. Still, there was a sense of relief after years of deadlock on the immigration issue.

“It’s obviously something that so many of us have been fighting for for so long,” said Melanie Nezer, the vice president of HIAS, the immigrant rights group that dates to the late 1800s. “We’re excited that for some people there is hope and relief and that it will make a difference.”

Under the new rules, children who were sent to the United States to escape violence in Central America will be able to travel to see their parents, sometimes after years apart. Hadar Susskind, the Washington director of the liberal advocacy group Bend the Arc, likened the situation to parents who handed their children over to non-Jews during the Nazi period.

“What this is really about is keeping families together, and that’s one of the most Jewish things out there,” said Susskind, who attended a White House briefing on the issue on the day of Obama’s announcement.

Much remains to be done, said Nancy Kaufman, the CEO of the National Council of Jewish Women, noting for instance that the actions do not address what has long been a focus of Jewish immigration advocacy: expanding access for those seeking asylum from persecution.

“We need to do for others what was not done for us when we needed an outreached hand during the Holocaust,” Kaufman said.

The Republican Jewish Coalition notably did not criticize the substance of Obama’s actions, focusing instead on the way Obama carried it out — through administrative order.

“We are united in strong concern that President Obama has exceeded his legitimate authority by making such far-reaching changes unilaterally and in defiance of the constitutionally designated law-making organ of our government — the Congress,” the RJC said in a statement.

The American Jewish Committee said in a statement that concerns about executive action may be beside the point.

“At this critical juncture, we underscore, as we have in the past, the urgent moral — and practical — need to bring undocumented immigrants out of the shadows,” the AJC said. “No matter where one stands on administrative action, the administration and the Congress should make it the utmost priority to work together in fashioning comprehensive bipartisan legislation that will provide for a permanent fix to our broken immigration system.”

Weinstein of the Religious Action Center said Jewish groups were ready to return to Congress to press for more sweeping reforms.

Noting that Obama quoted Torah, she turned to the Ethics of the Fathers, or the Pirkei Avot.

“We are not required to finish the task,” she said, “but nor are we free to desist from it.”