Despite ‘incitement,’ Abbas seen by Washington as bulwark 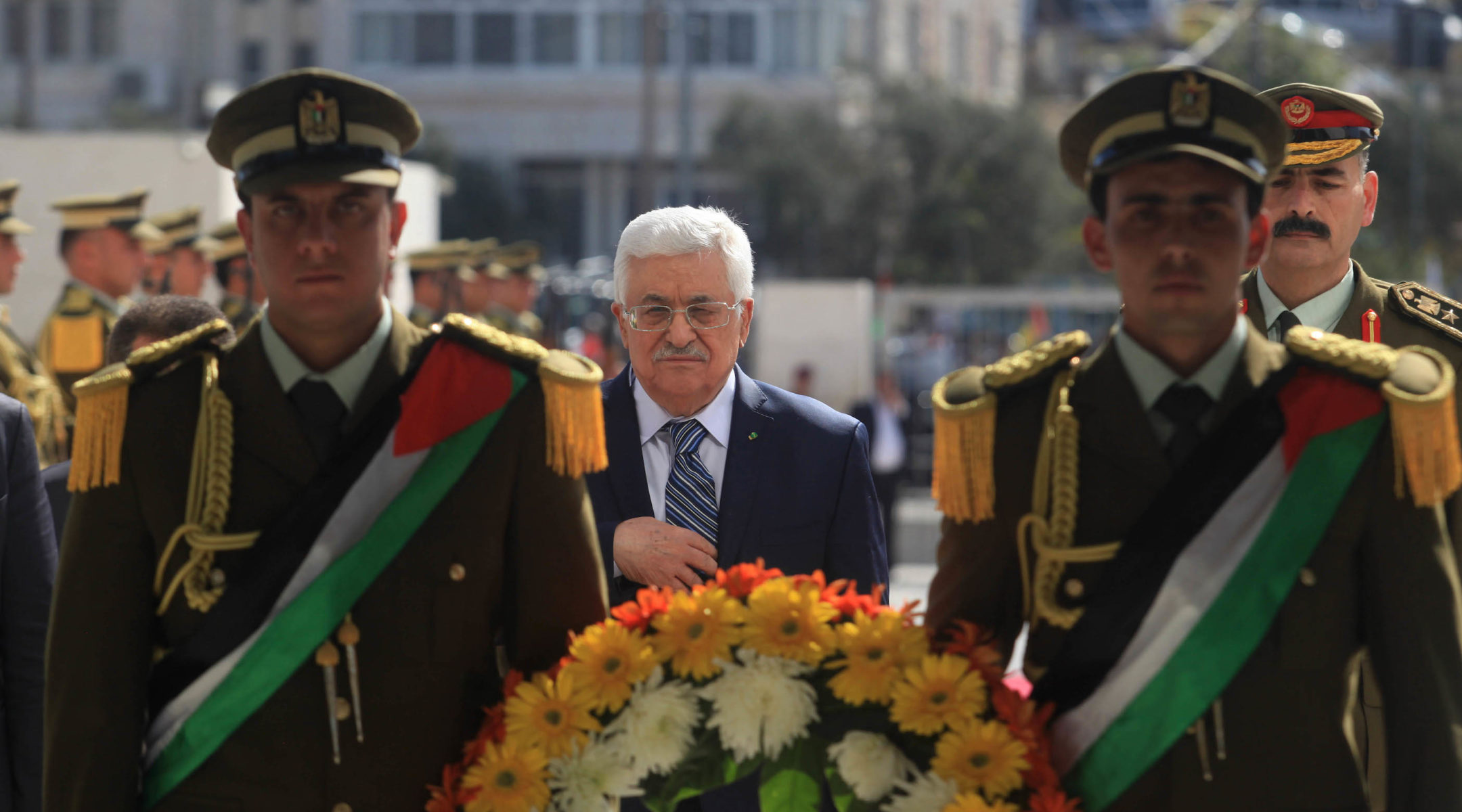 WASHINGTON (JTA) – The Mahmoud Abbas whom Israeli Prime Minister Benjamin Netanyahu has accused of incitement has said the Jewish state practices genocide and called the temporary closure of the Temple Mount after a terrorist attack a “declaration of war.” Yet virtually no one in Washington wants Abbas to do anything but what he’s done for nine years: be president of the Palestinian Authority.

For that matter, neither does Netanyahu.

That means the $500 million annually that the Palestinian Authority receives in U.S. funding is unlikely to stop, and that warnings from American politicians to Abbas are relatively mild, if expressed at all.

“The Palestinian Authority will be getting aid from America because we want a two-state solution, but you better get your act together,” Sen. Lindsey Graham (R-S.C.), who as incoming chairman of the foreign operations subcommittee of the Senate Appropriations Committee will hold considerable sway over foreign assistance, told the Israeli American Council earlier this month in reference to the P.A.

Keeping Abbas in power and the Palestinian Authority in place reflects Israeli policy, said Dan Arbell, a former deputy chief of mission at the Israeli Embassy.

“The Israeli government is not interested in the collapse of the Palestinian Authority,” said Arbell, a guest scholar at the Brookings Institution who teaches at American University here. “There may be faults in Abbas and the leadership and in what they’re doing, but they’re still the safest bet.”

That’s because Abbas is presiding over a West Bank where the violence that wracked the Hamas-controlled Gaza Strip over the summer and Jerusalem in recent weeks is barely simmering. Should Abbas and the P.A. go, Hamas could take its place.

“There is a bipartisan consensus on the significance of the PLO and the Palestinian Authority, while there is a lot of disagreement on Capitol Hill about every other thing,” Husam Zomlot, a foreign policy adviser to Abbas who last month met with government officials in Washington, told JTA.

“They know that the situation in the West Bank is relatively calm because of the PLO,” Zomlot said.

The Obama administration is not encountering congressional resistance to continued assistance to the Palestinian Authority in part because of strict oversight that ensures the funds reach their designated targets and because the cooperation between Israeli and Palestinian security services is seen as key to keeping the West Bank from boiling over.

Natan Sachs, a fellow at the Brookings Institution’s Center for Middle East Peace who focuses on Israel, noted that Israel’s Shin Bet chief, Yoram Cohen, last week pushed back against Netanyahu’s claims that Abbas is an inciter.

Sachs said that the recent crisis in Jerusalem underscored the utility of Israeli-P.A. cooperation.

“It’s not coincidental this wave of violence is in Jerusalem, where P.A. forces can’t operate,” he said.

At the same time, congressional appropriators last week wrote to Abbas asking him to end incitement.

U.S. law “clearly stipulates that the Palestinian Authority must act to counter the incitement of violence against Israelis in order to continue receiving U.S. assistance,” said the letter from Reps. Hal Rogers (R-Ky.), the chairman of the U.S. House of Representatives Appropriations Committee; Nita Lowey (D-N.Y.), its top Democrat; and Kay Granger (R-Texas), the chairwoman of its foreign operations subcommittee.

But the letter does not directly threaten a cutoff. Instead, it urges Abbas to “return to direct negotiations with Israel.”

Last April, after the collapse of the U.S.-brokered peace talks, the American Israel Public Affairs Committee, reflecting Netanyahu’s policies, urged lawmakers to review funding for the Palestinians. Abbas’ overtures to Gaza’s Hamas rulers, with both his Fatah party and Hamas backing a government of technocrats, may have made the P.A. ineligible for funds, AIPAC argued.

Now, in the wake of the summer’s Gaza war and the violence in Jerusalem, AIPAC frames funding for the P.A. as a necessary means of ensuring that Abbas keeps cooperating with Israel on security.

In a memo last week, after Palestinian terrorists murdered four worshippers and a policeman at a Jerusalem synagogue, AIPAC listed Abbas’ alleged incitements, including his call on Palestinians to prevent settlers from entering the Temple Mount by “any means” and to keep the Temple Mount from being “contaminated” by extremists. (Abbas condemned the synagogue murders.)

But the AIPAC memo, while noting that tamping down incitement was a condition for aid, also reflected in its recommendations the Israeli investment in Abbas as a bulwark against further violence and Hamas.

“The P.A. must continue security cooperation with Israel and take responsibility for controlling the border crossings into Gaza,” the memo said.

Jonathan Schanzer, the vice president of the Foundation for Defense of Democracies and the author of the book “State of Failure” about the P.A., said Abbas was walking a high wire — accommodating anti-Israel sentiment while helping to rein in violence. The danger, Schanzer said, is that the violence may not be easy to control, something Abbas’ predecessor Yasser Arafat discovered amid the second intifada in the early 2000s.

“What he’s doing now is trying to ride the wave of this sentiment,” he said. “He’s flirting with embracing a popular uprising. You get a sense he’s walking in Arafat’s footsteps.”

Zomlot, the Abbas adviser, said Palestinian security forces were not simply a sop to Israeli needs but also a means of improving quality of life for Palestinians. He accused Israel of undercutting the P.A.’s authority with raids into parts of the West Bank, for instance during the searches for the men who kidnapped and murdered three Jewish students over the summer.

“The premise of security cooperation is you do not come into my territory unless we work together,” he said. “Israel has been wrecking this principal, invading Palestinian Area A on a daily basis. You break the contract and ask yourself for how long this commitment will be one sided.”

Palestinian Area A refers to those areas of the West Bank where the Palestinian Authority is meant to prevail, per the Oslo Accords of the 1990s.

Zomlot said the Palestinians wanted to review other aspects of the relationship, saying that much of what the Oslo agreements outlined no longer held, especially with a substantial portion of Netanyahu’s governing coalition opposing the two-state solution.

This month, the P.A. signed a $660,000 per year contract with the major Washington lobbyist Squire Patton Boggs to “help manage the P.A./U.S. bilateral diplomatic and political relationship” and review the 1994 Paris Protocol governing economic relations, according to O’Dwyer’s, a PR industry newsletter.

“The Paris Protocol assumed a state would emerge within five years,” Zomlot told JTA, noting that its provisions keep the Israeli and Palestinian economies tightly interwoven. “It is no longer capable of serving the needs of the Palestinian economy.”