For the Frishmans, there was no place like Home 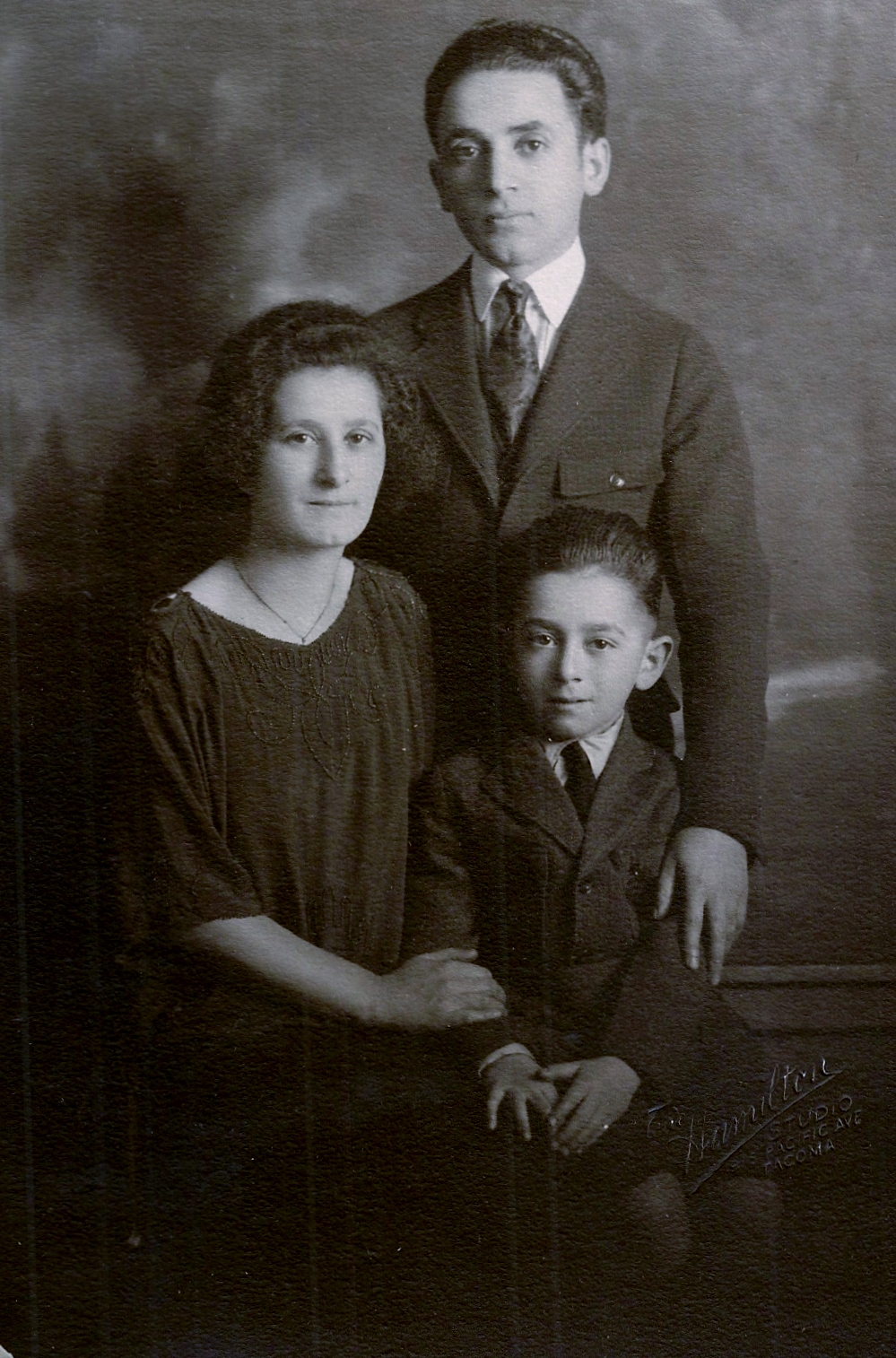 Harry and Yetta Frishman with their son Daniel are shown circa 1920, shortly after moving from Paterson, N.J., to Tacoma, Wash. (Courtesy Hillel Kuttler)

BALTIMORE (JTA) – “Seeking information on Harry and Yetta Frishman, who lived in Paterson, N.J., and moved to Tacoma, Wash., and then Home,” read the brief email to “Seeking Kin.”

The emailer wasn’t speaking metaphorically. Home is a real place, located a 30-mile drive from Tacoma via roads that loop northwest and then south to the tiny, unincorporated town on the Key Peninsula.

But in a way, the correspondent, Daniel Frishman Jr., 68, of Shelton, Wash., was sending his grandparents home – to me.

Upon seeing his name, I knew immediately that Harry and Yetta were his grandparents and that about 100 years ago they had settled in Tacoma. Unbeknownst to Daniel Jr. when he sent the email was that we are second cousins, once removed: His grandparents were the brother and sister-in-law of my maternal great-grandmother, Fannie Eisen, who as a child I saw often because she had an apartment on the fourth floor of our Queens, N.Y., building.

Fannie’s was the first funeral I attended, in 1972. She was the oldest of six siblings who had immigrated in 1905 with their parents, Aaron-Leizer and Rebecca, from Pabianice, Poland, to Paterson. I’d met only one of Fannie’s siblings, my Aunt Minnie, who lived in Paterson with her husband, Joe Brooks, until their deaths in the late 1970s. Three other Frishman siblings evidently remained in the New York metropolitan area the rest of their lives.

An old portrait I had been given by my late Grandma Rozzie shows Harry, Yetta and their son Daniel all formally dressed. The portrait and its cardboard cover were embossed with the name and address of the photography studio in Tacoma, so when researching them six years ago, I knew where those Frishmans had lived.

I’d wondered, like the question Daniel Jr. posed: Why there? Another branch of my family relocated in the early 1920s to Los Angeles after immigrating to New York – but Tacoma?

In 2008, I located Daniel Sr.’s son, David, through an online search and would have asked him, but he didn’t wish to speak. Nor could I reach his brother or sister. So the email from Daniel Jr. offered a new opportunity.

Notes from the search relaunched my efforts. They related a conversation with a librarian from the Key Center Library who had said that Home was a short-lived collective settlement drawing anarchists in the early 1900s. For many decades after, the U.S. government refused to grant Home its own post office, and even mail addressed to the town was summarily returned to sender, she said.

Then, earlier this year, the book “Trying Home: The Rise and Fall of an Anarchist Utopia on Puget Sound” was published. Its author, Justin Wadland, explained that he set off exploring the town’s history after coming across The Anarchist newspaper as a graduate student at the University of Washington.

“The types [drawn] to Home were urban people attracted to a slower, rural way of life,” Wadland said by telephone from the University of Washington’s Tacoma branch, where he is a librarian. “There were a fair number of Jewish people there involved in radical politics at that time,” including many “raised in a traditional Jewish family.”

Among them was Emma Goldman, made famous anew in Warren Beatty’s acclaimed 1981 film “Reds.” Though she didn’t live in Home, Goldman made several visits to friends there, Wadland said.

Jewish residents there, according to his research, included Louis Hyman, a barber, and Esther Abramowitz, the common-law wife of The Agitator’s publisher, Jay Fox, an Irish-American who was not Jewish. A Christian sect originating in Russia, the Doukhobar, also had settled in Home.

Home was twice put on the map notoriously, Wadland said.

In the aftermath of President William McKinley’s 1901 assassination by an anarchist, Home residents feared a raid from the Loyal League, a newly formed Tacoma group. And in 1911, Fox published an article headlined “The Nude and the Prudes” that criticized the arrest of nude bathers at Joe’s Bay. Fox was arrested and convicted on a misdemeanor charge of inciting disrespect for the law. He appealed all the way to the U.S. Supreme Court, which in 1913 upheld the verdict.

Four years later, on May 1, 1917, the Frishmans reached Tacoma, although it’s not known when they lived in Home. Some records found by Pat Vassilaros, an amateur genealogist who assists “Seeking Kin,” also revealed that Harry and Yetta were naturalized in Tacoma District Court; their son was born in Paterson. By 1931 they had moved to Seattle.

Wadland said he had not encountered the Frishman name while researching the town, which then as now numbered some 250 people. Daniel Jr. retains memories of his grandfather’s barber shop in Home occupying a small building next to Tillman’s gas station. While the latter remains a gas station under a different name, Daniel Jr. said after visiting Home in late October that the barber shop site is now a parking lot for a grocery store.

Without oral history, it’s hard to know what drew the Frishmans to Home.

Daniel Jr., a retired actor and real-estate agent, wonders whether communist stirrings in Russia prompted them, although his grandparents were “pretty conventional people and not politically or socially engaged,” he said. Perhaps they moved cross country on the recommendation of a friend living in Tacoma or Home.

Unknown, too, is the Frishmans’ resting place. (Yetta died in 1966, Harry in 1978.) The website of Home of Peace Cemetery, a Jewish burial ground in nearby Lakewood, in Pierce County, doesn’t list the couple as being interred there.

It is hoped that somewhere they are at peace and at home.