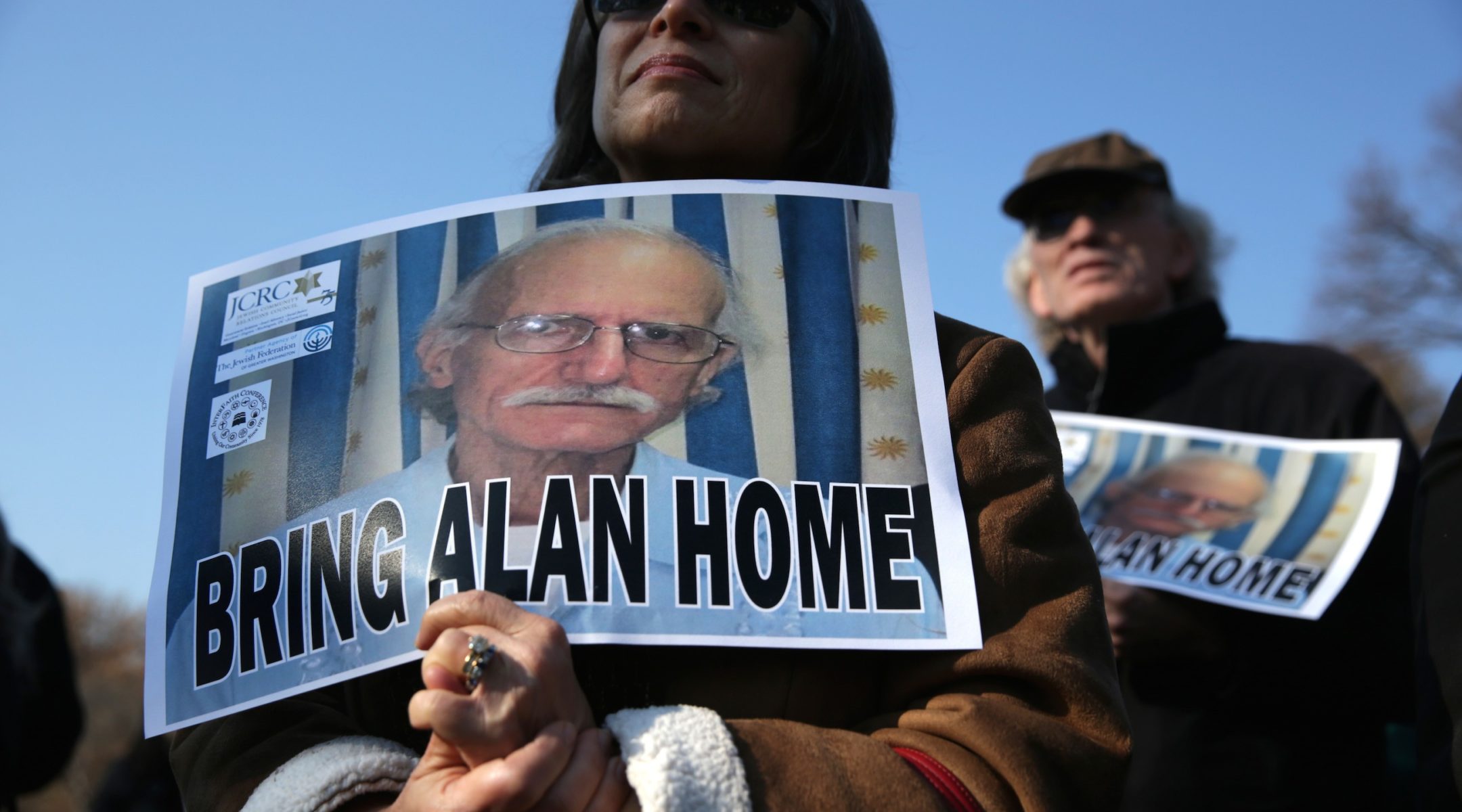 Supporters of Alan Gross, who has been imprisoned in Cuba since 2009, rally outside the White House on Dec. 3, 2013. (Alex Wong/Getty Images)
Advertisement

WASHINGTON (JTA) – The Obama administration announced the release of Alan Gross amid sweeping changes in Cuba-U.S. ties, including a return to full diplomatic relations.

Gross, 65, a Jewish-American contractor, was released Wednesday morning and was flying to Washington with his wife, Judy, where he will be met by U.S. lawmakers who advocated for his release.

In a deal that American officials said was technically separate from Gross’ release, the United States and Cuba agreed to exchange the three remaining incarcerated members of the “Cuban Five,” a Florida-based spy ring, for an American spy held in Cuba for 20 years and whose identity remains a secret.

“We believe that Alan was wrongfully imprisoned and overjoyed that Alan will be reunited with his family in this holiday season of Hanukkah,” a senior administration official said Wednesday in a conference call with reporters.

The official said the Vatican played a key role in negotiating the deal, in part through Pope Francis’ pleas to Cuba to release Gross as a humanitarian gesture.

Gross was arrested in 2009 after setting up Internet access for the Cuban Jewish community while working as a contractor for the U.S. Agency for International Development. He recently marked the completion of his fifth year in prison; he had received a 15-year sentence.

On the conference call, officials also outlined sweeping changes in U.S.-Cuba policy, including the resumption of full diplomatic relations, the opening of an embassy in Havana, and a loosening of trade and travel restrictions. Obama administration officials insisted that Gross was not part of the spy exchange and that, in fact, his imprisonment held up changes to the U.S.-Cuba relationship Obama had intended on initiating years ago.

Republicans who have opposed easing the Cuba embargo blasted the deal. Sen. Marco Rubio (R-Fla.), the son of Cuban immigrants, told Fox News Network that President Obama was “the worst negotiator since at least Jimmy Carter, and maybe in the history of this country.”

Jewish groups welcomed the deal, however, and noted the political difficulties it must have created for the Obama administration.

“We know the decision to release the Cuban three was not an easy one,” the Conference of Presidents of Major American Jewish Organizations said in a statement. “We appreciate the efforts of President Obama and Vice President Biden in bringing this about.”

Gross, of Potomac, Md., reportedly is in ill health. He lost more than 100 pounds since his incarceration and has suffered from painful arthritis.