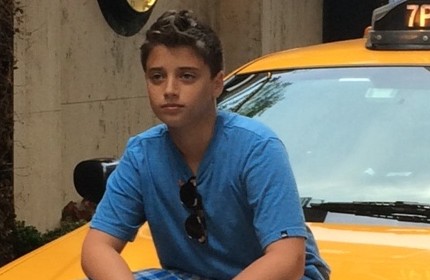 Dylan Sharp, 13, raised nearly $50,000 at his bar mitzvah for the Tikva Children’s Home in Ukraine and now is spreading the word about the organization in an email campaign to teens. (Courtesy of Dylan Sharp)

WASHINGTON (JTA) — Dylan Sharp capitalized on his bar mitzvah to raise nearly $50,000 from family and friends for the Tikva Children’s Home, an organization that rescues and houses at-risk Jewish children in the Ukraine.

Now he’s spreading the word to his peers across the country.

At his ceremony in September, Sharp spoke on the bimah of New York’s Temple Shaaray Tefila about how moved he was by the plight of the children at the Odessa home after watching the organization’s videos.

The 13-year-old Manhattanite urged the nearly 300 guests to donate to the charity in lieu of giving him gifts. In addition, he made available informational pamphlets about the Tikva Children’s Home.

A seventh-grader at the Riverdale Country Day School, where his favorite subject is math, Sharp said he hopes to “inspire a lot of kids” to use their bar or bat mitzvahs as a platform to help others.

Recently, Sharp and his family — his parents, a brother and sister — visited the Tikva Children Home. Over the course of several days he played sports and did other activities with its residents.

“Playing with the kids and really seeing where my money and the money from those who donated went, I was really happy,” Sharp said.

Now an email campaign is urging pre-bar and bat mitzvah students to share information about Tikva with their network of peers. Rabbis at 10 U.S. synagogues are assisting in the effort.

For his generosity and serving as a role model to other teens, Sharp was honored at the Tikva Children’s Home annual gala in New York.

“It’s extremely important to give and help out in any way that you can,” said Sharp. “A bar or bat mitzvah is not just about having a big party, it’s also about becoming an adult and maturing.”

JTA caught up with Sharp to ask him about his aspirations for the future, the Jewish dish he most likes to cook and his advice for choosing a bar and bat mitzvah project.

JTA: What do you think are important qualities of a hero?

Sharp: I think a hero is somebody who gives to others in need and inspires other people. He does what is right for everyone and not just for himself.

I’d like to be either a chef or a writer. They are two things that I really love doing. My dad’s a great cook, and I cook whenever I can.

What sort of things do you like to cook? Is there a favorite Jewish food?

I like to make breakfast and lunch, mostly omelets and eggs, and I’ve helped my dad make really good latkes.

What is your favorite Jewish holiday?

Hanukkah, it’s really great. My family has the most traditions for when we all come together to light the candles, and we give thoughtful gifts.

What advice would you give to other kids when choosing a bar or bat mitzvah project?