In the wake of attack, #JeSuisJuif 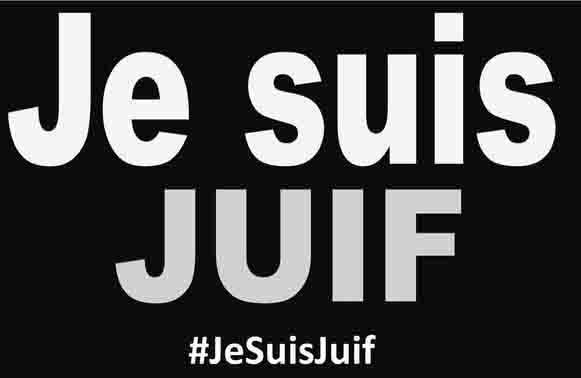 In the wake of Wednesday’s deadly attack on the offices of the Charlie Hebdo newspaper, the hashtag #JeSuisCharlie (“I Am Charlie”) swept the internet in solidarity with the victims. Then came #JeSuisAhmed, to honor Ahmed Merabet, the Muslim police officer murdered during the Charlie Hebdo attacks, and who has become a symbol of inclusion and respect for non-Islamist Muslims.

Now, after today’s attack on the Hyper Cacher kosher supermarket in eastern Paris has come #JeSuisjJuif, to show solidarity with the beleaguered Jews of France. Here are a few examples:

I am a Muslim but #JeSuisJuif as I stand with the oppressed in the face of being targetted for murder. I call upon Muslims to do the same!

I am thinking of those poor Jewish hostages in the Kosher store in Paris… #JeSuisJuif #JeSuisCharlie — regina spektor (@respektor) January 9, 2015

According to an analytics graph posted by hashtags.org, the tweet took off around 7 a.m. Eastern time, and peaked at around 9 a.m., with just under 4,000 tweets per hour. According to topsy.com, #JeSuisJuif has been tweeted more than 20,000 times. However, it isn’t entirely clear that it’s making the same impact as some of the other solidarity hashtags. For one thing, it’s numbers remain miniscule to #JeSuisCharlie, which, two days after the original attack, and far below its peak, still posted some 676,000 tweets in 24 hours, according to topsy.com. More significantly, as the Jerusalem Post noted, while some of the tweets have been by non-Jews, a significant majority seem to be tweeted by Jews, making it more an emblem of Jewish pride than a display of ecumenical solidarity.

Here’s to my great great grandparents who left Europe for America so I could say things like #JeSuisJuif and not get killed for it. — Rachel Figueroa (@Jewyorican) January 9, 2015

Some of the tweets also took on a notably defensive, or even combative, tone.

If you tweeted #JeSuisCharlie but won’t tweet #JeSuisJuif today, I think we can all figure out the reason. pic.twitter.com/eVtOYbvlrP — Ben Shapiro (@benshapiro) January 9, 2015

Still, others worked to maintain a sentiment of unity.