Live Blog: The latest from Paris 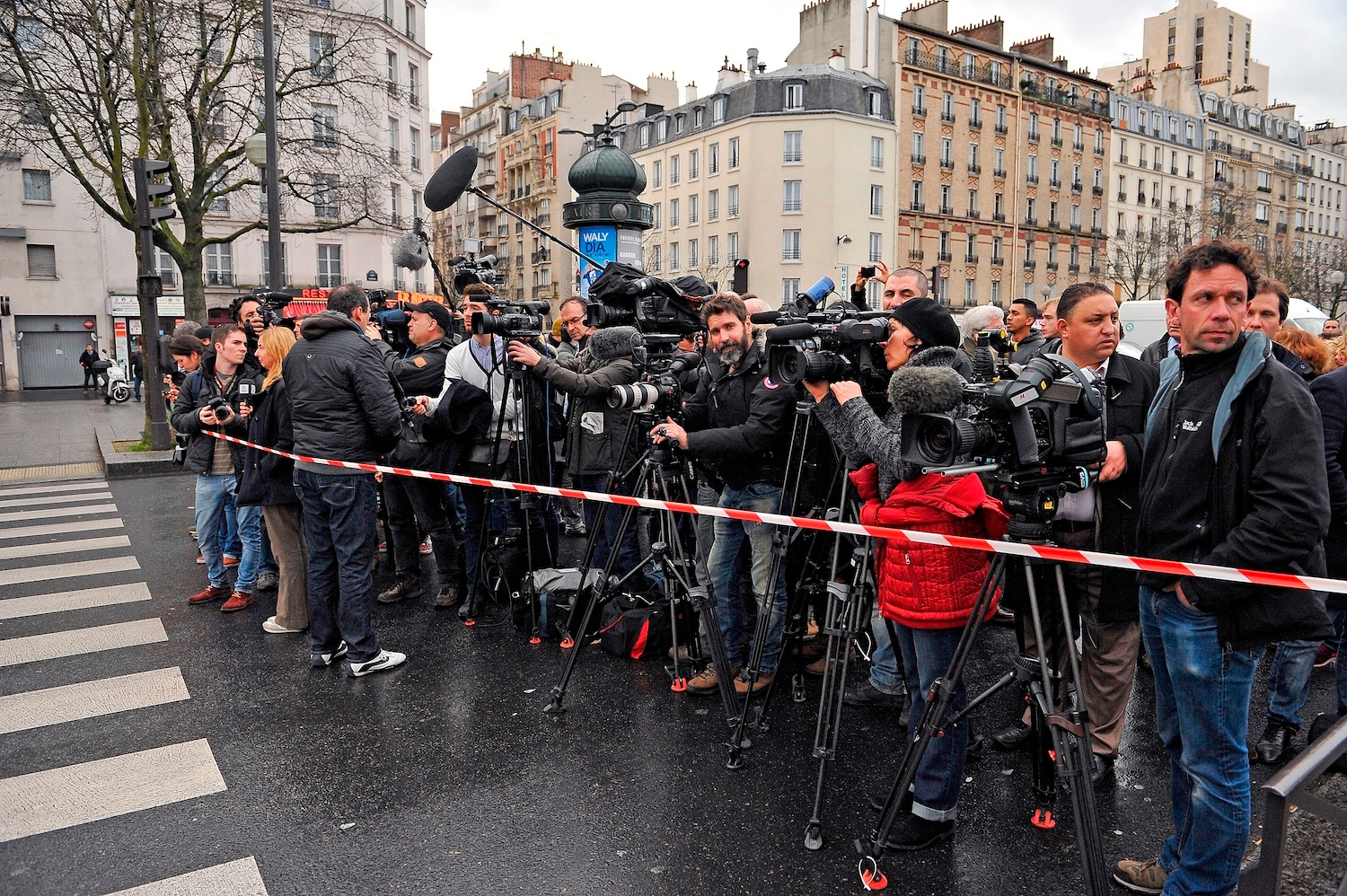 Media stand by as police mobilize with reports of a hostage situation at Port de Vincennes on Jan. 9, 2015 in Paris. (Aurelien Meunier/Getty Images)
Advertisement

There were two hostage standoffs in and around Paris today: one at a kosher supermarket in Vincennes, near the 12th Arrondissement and one at a printing plant outside Paris.

Below is the story we’re running, and we’ll update here with the latest information. Time dates are in Paris time, GMT+1.

20:40: Israel’s embassy in Paris announced the scheduled arrival of Prime Minister Benjamin Netanyahu and Foreign Minister Avigdor Lieberman to France to attend a mass march through Paris’ center Sunday along with French President Francois Hollande and British Prime Minister David Cameron, among other world leaders. The march is in support of democratic values and in protest of the slaying of 17 people in jihadist attacks in France, including the attack Friday on the Hyper Cacher kosher supermarket and the killing of 12 on Jan. 7 at the offices of the Charlie Hebdo weekly.

19:30: Paris Mayor Anne Hidalgo and French Interior Minister Bernard Cezeneuve joined several thousand people, many of them Jews, at a vigil outside the Hyper Cacher supermarket in memory of the four Jews who were killed there on Friday by an Islamist.

18:25: CRIF Presdient Roger Cukierman thanked 1,000 people for attending a memorial ceremony at the city hall of the Paris suburb of St. Mande for the victims of a shooting Friday at a nearby kosher supermarket in which four Jews were killed. He said their presence provided solace, but warned that “thousands of French Islamists in Iraq are ticking, inbound time bombs.”

“These French citizens were struck down in a cold-blooded manner and mercilessly because they were Jews,” read the CRIF statement sent out on Saturday.

02:01 — Citing security concerns that were raised in talks with police and city officials, pro-Israel activists in Amsterdam postponed indefinitely a rally they had planned to hold on Jan. 11 at the center of the Dutch capital in solidarity with the Jewish state.

The organizers from the Holland4Israel group cited “the current situation in Paris” in explaining why they decided to scrap the event after talks with officials. The talks made the organization realize it was unable to guarantee the safety of participants, organizers added.

01:30 — French Prime Minister Manuel Valls said France may question the effectivity of its current legal arsenal against terrorism, but at the same time warned against “improvised” legislation.

French President Francois Hollande, meanwhile, said he would attend the Jan. 11 solidarity march with the victims of the Charlie Hebdo attacks. According to Le Figaro, it would be the first time a French president attended a protest rally since Francois Mitterrand marched in 1990 to show his disgust with the desecration of Jewish headstones.

01:21 — The Grand Synagogue of Paris was closed during Friday’s terror attacks and did not reopen for Shabbat services, marking the first time the synagogue has not held services since World War II.

The synagogue was closed by French police during the hostage standoff at the Hyper Cache kosher supermarket, according to USA Today, despite being far from the site of the siege, which took place in eastern Paris. Even after the siege ended, the synagogue did not reopen for prayers.

The police also closed the Rue des Rosiers shopping street in the historically Jewish neighborhood of the Marais.

The Orthodox Union told the Jerusalem Post that the synagogue had not been closed for Shabbat since World War II.

00:16 — Al Qaeda in the Arabian Peninsula has released a statement claiming responsibility for the attacks. The statement, a copy of which was obtained by The Intercept, declared, “The leadership of #AQAP directed the operation, and they have chosen their target carefully as a revenge for the honor of Prophet.” The statement added that “The target was in France in particular because of its obvious role in the war on Islam and oppressed nations.” It also threatened further attacks against the West.

The statement accords with the interview Chérif Kouachi gave to French television station BMFTV, in which he claimed to have been sent by Al Qaeda in Yemen (another name for the same group). However, it does conflict with a statement by supermarket hostage-taker Amedy Coulibaly, who told BMFTV that he was connected to Islamic State [ISIS], which is a rival group to AQAP. It is unclear if Coulilaby also had separate connections from the Kouachi brothers or if he was confused.

The AQAP statement also appears to be in tension with an earlier message given to The Intercept by a source in AQAP, which stated, “Do not look for links or affiliation with Jihadi fronts. It is enough they are Muslims.”

23:33 — The New York Times shows video of the climaxes of the two showdowns between police and terrorists, with explosions and gunfire at the siege of the Kouachi brothers at the printing plant, and hostages fleeing from the kosher supermarket.

22:41 — French police continue to search for Hayet Boumeddiene, 26, the girlfriend and alleged accomplice of now-dead supermarket attacker Amedy Coulibaly. A police union spokesman told CNN that she may have fled and escaped during the confusion when police stormed the supermarket, killing Coulibaly and freeing the hostages.

The Telegraph reports that French police issued a wanted poster for Boumeddiene and Coulibaly in connection with a shooting on Thursday that killed a 27-year old French policewoman, Clarissa Jean-Philippe in the southwest Paris suburb of Montrouge.

22:11 — Le Monde confirms that four hostages were killed and four policemen were wounded in the raid on the supermarket.

Vox runs the video from BFMTV which includes audio of the two terrorists at the separate scenes — the supermarket and the printing shop — explaining that their acts were coordinated from the outset (the attack on Charlie Hebdo). Chérif Kouachi, who took part in the Charlie Hebdo attack and died at the printing plant, says he was trained in Yemen.

The New York Daily News links to a 2009 story in Le Parisien, a Paris newspaper, about a meeting between the kosher supermarket attacker, Amedy Coulibaly, and then-President Nicolas Sarkozy, when Sarkozy hobnobbed with young workers. Coulibaly was working then for Coca Cola.

20:54 — Euronews reports that one of the accomplices of the supermarket hostage-takers, Hayet Boumeddiene, is still at large. Boumeddiene had lived with hostage-taker Amedy Coulibaly since 2010. The criminal record of Coulibaly, who is 32, dates back to his teen years, including several armed robbery convictions in 2001.

Coulibaly is believed to have converted to Islam while in prison, where he met Cherif Kouachi, one of the terrorists in today’s attacks.

Meanwhile, in a speech broadcast on French television, President Francois Hollande congratulated police for their courage and efficiency and called for France to show solidarity with the victims of this week’s terror attacks, Euronews reported.

20:25: — President Obama said the United States stands with France against the “hatred and suffering” of the recent terror attacks, NBC News reported. Speaking in advance of a planned speech at Pellissippi State Community College in Tennessee, Obama also said he offered law enforcement and counter-intelligence support to France, according to CNBC.

20:10 — Reuters is reporting that there is a new hostage situation in the southern French town of Montpellier. Two hostages  have been taken in a jewelry store, and police have surrounded the area. It is not yet clear whether the situation is a terror attack or attempted robbery.

20:02 — Euronews is reporting that four captives are dead and four badly injured, with 15 unharmed. It cited a government source saying the brothers had come out of the building and opened fire on police before they were killed. Almost simultaneously approximately six loud explosions were heard at the scene.

19:31 — Le Monde is reporting that BFMTV, a local TV station, interviewed the hostage takers at the printing plant and at the supermarket who both said that they were coordinated and that they answered to al Qaeda Yemen. They said they had ties to the American-Yemeni cleric Anwar Al-Awlaki, who was killed in 2011.

18:09 — Le Monde says “several” hostages were killed in the kosher supermarket; other agencies give the number as four. The newspaper also confirms that the dead hostage taker at the Hyper Cacher market is Amedy Coulibaly. Britain’s Telegraph says two police were injured in the supermarket raid, one critically.

17:44 — Top U.S. Jewish security chief on site, the Conference of Presidents of Major American Jewish Organizations reports. “As part of the ongoing communication and coordination with our European counterparts, Paul Goldenberg, the head of the Secure Community Network (SCN) of the United States is in Paris for meetings with his European counterparts and is close to the site of the attack on the kosher establishment,” release says. RK

17:27 — Hostage takers killed, hostages freed at both sites. Le Monde runs photo of police escorting hostages out of kosher supermarket. Number of casualties yet to be reported.

17:02 — Le Monde is reporting gunfire and a police attack on the printing plant at Dammartin-en-Goële RK

16:50 — Israel has a SWAT team ready to head to Paris, Haaretz reports. RK

16:44 — News agencies are reporting that the hostage taker in the kosher supermarket is threatening to kill hostages if police raid the printing plant. RK

16:39 — Le Monde reports that police are seeking Hayat Boumeddiene, the girlfriend of Amedy Coulibaly, the suspected supermarket attacker, not because she is believed to be involved in the attack but for further information on Coulibaly. RK.

16:35 — Britain’s Channel 4 reports a hostage in the supermarket calls her mother and tells her she loves her. RK.

16:39 — French police have set up a security perimeter of roughly 300 yards around the Paris kosher supermarket where eight to 15 people are being held hostage, including at least one child, witnesses at the scene said. CL.

(JTA) — Several people are being held hostage at a kosher supermarket in Paris, and two are reported dead.

The hostage situation began shortly after noon at Hyper Cacher, a kosher supermarket in Porte de Vincennes near Paris’ 12th arrondissement, acording to Chlomik Zenouda, vice president of the National Bureau for Vigilance Against Anti-Semitism.

“Ten people are being held hostage and one person, probably a member of the Jewish community, was wounded in the takeover,” he told JTA.

Witnesses said the shots were fired from an automatic assault rifle. The shooter then retreated into the supermarket, witnesses said.

The person holed up inside the kosher supermarket is believed to be connected to the killing of a police officer in the suburb of Montrouge south of Paris on Thursday, Zenouda said, citing police sources.

Police locked down schools in the vicinity. Authorities in the 4th Arrondissement said that police had ordered shops to close on the rue de Rosiers, a Jewish area where shoppers tend to proliferate in the hours before Shabbat.

The killer in the Montrouge attack shot the officer and wounded another person after his vehicle was involved in an accident, French media reported. He then fled the scene. Police believe they have identified the shooter and were searching for him, Le Monde reported.

Citing police sources, Le Figaro reported that police found a link between the suspect of the shooting in Montrouge and two men they suspect of murdering 12 people on Wednesday at the offices of the Charlie Hebdo weekly.

Reports said police have released photos of two people wanted in the shooting of the police officer: a man, Amedy Coulibaly, 32, and a woman, Hayat Boumeddiene.

Two men who are suspected of staging the Charlie Hebdo attack have taken at least one person hostage and are holed up in a printing shop north of Paris, Le Monde reported.

Coulibaly and Chérif Kouachi, one of the suspected Charlie Hebdo attackers, were both followers of Djamel Beghal, a charismatic Islamist, Le Monde reported.