Amid increased scrutiny and risk, camps grapple with teen sexuality

NEW YORK (JTA) — The counselors didn’t approve but preferred not to meddle: According to the bunk’s “hook-up competition,” each teenage girl was supposed to mark a space on the cabin wall with her name and date indicating when she had successfully kissed — or otherwise hooked up with — a boy.

Naomi Less, a longtime camp consultant, was approached for advice from the camp, which she preferred not to identify. She counseled to paint over the wall.

Less, a rock musician and Jewish educator as well, also suggested that the counselors “bring in someone to speak with the girls about the idea of pressuring each other to perform acts they weren’t ready for — or didn’t want to do — and to reduce the heteronormative ‘hooking-up’ assumptions, as there will most certainly be girls within the bunks who will not ever want to ‘hook up’ with guys because they are lesbians.”

While sexual behavior and boundaries on college campuses — particularly the growing number of reported rape cases — has been in the spotlight in recent months,  at overnight camps these issues tend to receive less attention, in part because teens there are more heavily supervised and must adhere to strict no-alcohol policies.

Some have argued that Jewish summer camps should be more proactive about how they address campers’ romantic relationships, particularly given that some statistics indicate that as many as one in three female adolescents is a victim of sexual assault.

Dana Fleitman, manager of prevention and training programs at Jewish Women International, recently developed a project focused on combating teen dating abuse (materials available free at http://datingabuse.jwi.org), and believes that education should begin “early, from the time kids are young teens, long before they go to college.” The JWI program, which provides tools for adults to speak with teenagers, could easily be adapted to a counselor orientation program, Fleitman says.

Mara Yacobi, a New Jersey-based social worker and founder of JLove and Values, a nonprofit that provides sex education from a Jewish values perspective, has done staff training at several Jewish camps and has also spoken with campers. She recalls one eighth grader who stated, “This summer it was all about kissing and feeling up a girl’s shirt,” and that “Next summer it’s all about the hand job.”

The comment, made during a co-ed discussion, reflected a general sense that “sexual behaviors were about achieving one conquest after another,” says Yacobi, who reminded that group that “if you are being intimate with someone, take time to remember that you are sharing this experience with a person — not an object.”

“Summer camps have a unique opportunity to spend time on issues that schools do not,” Yacobi told JTA. “Spending time simply reviewing the qualities of a healthy and unhealthy relationship are the types of conversations young people are yearning to have with the camp counselors they admire.”

One potential model for doing that is Tawonga, a JCC camp on the outskirts of California’s Yosemite National Park, which offers one of the Jewish camp world’s most carefully considered approaches to physical intimacy and relationships. Jamie Simon-Harris, the director at Tawonga and a former sex educator for United Against Sexual Assault in Sonoma County, Calif., leads several workshops about sexuality. The camp also starts each session with girls-only, boys-only and transgender campfire discussions about sexual identity. Later, Simon-Harris leads optional sessions in which Tawonga’s youngest campers learn how to be a good friend, the middle school-age children discuss relationships, and the teens delve into the physical and emotional components of safe sex. 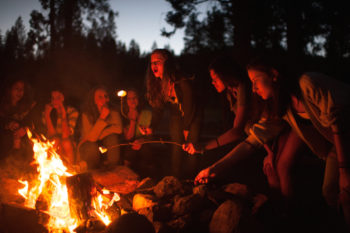 Sam Quintana, who is 25 and a “lifer” at Tawonga, says the camp’s “sex positive” approach “validates rather than shames.”

Quintana, who is now on the camp’s year-round staff adds, “The sexual values I learned at Tawonga have been incredibly transformative. It’s about the ability to relate to other people and treat other people with respect.”

Tawonga’s extensive examination of sexuality may not feel appropriate in all camp settings, particularly its “hugging and kissing with all clothes on” credo, which Quintana describes as a way to defuse “pressure to be in a relationship.”

Sheira Director-Nowack, the associate director of Camp JRF in South Sterling, Pa., says she “would never say ‘’kissing with clothes on is OK,’ because maybe the kid is not ready, and then it would make that the norm.”

She has spoken with campers about the problem of overly provocative attire, however, inspiring a new slogan for the Friday night dress code: “No Shabooty; No Shabooby.”

Rabbi Mitchell Cohen, the national director of the Conservative movement’s Ramah camping movement emphasizes that the “most important thing is how to reduce social and sexual pressures on children.”

Despite their “sex-positive” approach, Tawonga leaders emphasize that the summer should be more about community than coupling. “If a camper chooses just friendships, that’s also totally accepted. Dating can be part of camp, but it can’t be all of camp,” says Simon-Harris.