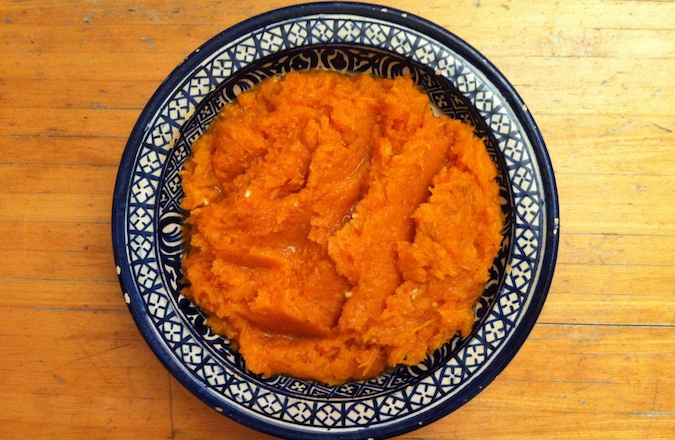 (JTA) — From Givatayim’s renowned Sabich Shel Oved – a simple eggplant-sandwich shop with lines snaking around the corner — to lesser-known places like Chachaporia Georgian cuisine in Jerusalem, the new e-book “Israel’s Top 100 Ethnic Restaurants” provides the English-speaking tourist a window into the delectable, folksy Israeli foods that locals have raved about for years.

Israel has been on the culinary ascent of late, with dozens of food blogs, new high-end restaurants, cooking shows and celebrity chefs, and a fascination with everything foodie. But there’s no need for catchphrases like “local” and “fresh” in a place famed for its bountiful produce piled high in open-air markets, from Tel Aviv’s Carmel Market to Mahane Yehuda in Jerusalem.

As noted in the book, which was published by The World Jewish Heritage, a nonprofit that promotes tourism to heritage sites, both markets also house restaurants and after-hour bars in addition to the daily fruit, vegetables and tchochkes they cacophonously hawk.

Many of the tastiest morsels aren’t served up in white-cloth establishments or by rising stars. Rather they are offered at nondescript holes in the wall and unadorned booths by old-school traditionalists, like Savta Eva on Allenby Street in Tel Aviv, serving classic Ashkenazi fare such as chicken soup with matzah balls and farfel, or Rita Romano of the Libyan buffet at Rita’s Kitchen in Herzliya.

That raises the question, what exactly is Israeli ethnic food?

“It’s Moroccan, Russian, Polish, Bukharian, Ethiopian, Syrian, Lebanese — you name it,” says famed Israeli food critic, TV personality and chef Gil Hovav, who served as a consultant on the book. In the foreword, he writes, “While terroir may be too big a word to apply to Israeli street food, we are definitely loyal to whatever grows in our sun-drenched part of the world, where everything seems to be in season all year round.”

At a book launch event this month at Israeli chef Einat Admony’s Lower East Side restaurant Balaboosta, Hovav told a story of coming to New York after 9/11 to film his show, but instead being recruited to cook breakfast for 500 Ground Zero workers at 5:30 a.m. in conditions he said were more rustic than his days in the Israeli army. After feeding shakshuka to the hungry hordes, the sated workers marveled, “How interesting that in Israel you eat Mexican food for breakfast!”

The chef, who came to New York for two days for the event, will return in March for three days to host a Yemenite Pop-Up dinner with food writer and Israeli cuisine expert Adeena Sussman on the Upper West Side in collaboration with the website EatWith.

In “Israel’s Top 100 Ethnic Restaurants,” which offers capsule reviews and a sampling of color photos, there’s also Yemenite, Egyptian, Iraqi, Turkish, Persian, Tunisian and Ashkenazi food — they are notably lumped together under one heading the way the variegated Mizrahi and Arab cultures are often termed “Sephardic” in America. A number of hummusiyot — hummus joints — are featured in every section, from Hummus Ashkara in Tel Aviv to Pinati in Jerusalem. But you’d probably need another whole e-book just for the chickpea spread alone, which when it comes to “the best” engenders fierce debates as heated as any in the Middle East.

“We could have easily done 500 restaurants,” Hovav says, noting that the next step is to add Arab and Bedouin eateries.

He writes in the foreword, “We are people from more that 60 ethnicities living in a tiny country, and each and every one of us is certain that his or her grandma’s cholent” — or for that matter tbit or hamin or whatever your Saturdaystew is called — “is far better than everyone else’s. And you know what? That is what makes us unique. And delicious.”

The following recipe is courtesy of Hovav.

Chirshi is a well-seasoned Libyan pumpkin paste traditionally served as an appetizer accompanied by thick slices of simple challah bread. The secret of this dish is to maintain the incandescence of the pumpkin by avoiding overcooking or overseasoning it — but seasoning should nonetheless be applied generously to the dish, as we are ardent supporters of dominant flavors. Therefore, although normal quantities in Israeli cuisine are of rather flexible nature (for Israelis are notoriously disobedient), it is important to strictly follow the quantities and preparation instructions provided in this recipe.

Preparation:
1. Cook pumpkin, sweet potato and carrots in boiling water until carrots are soft and let rest in the colander to rid of any excess water.

2. Roughly mash the vegetables using a fork (not a food processor!) together with the remaining ingredients. Leave a few chunks.

4. Serve hot or cold with plenty of fresh bread.