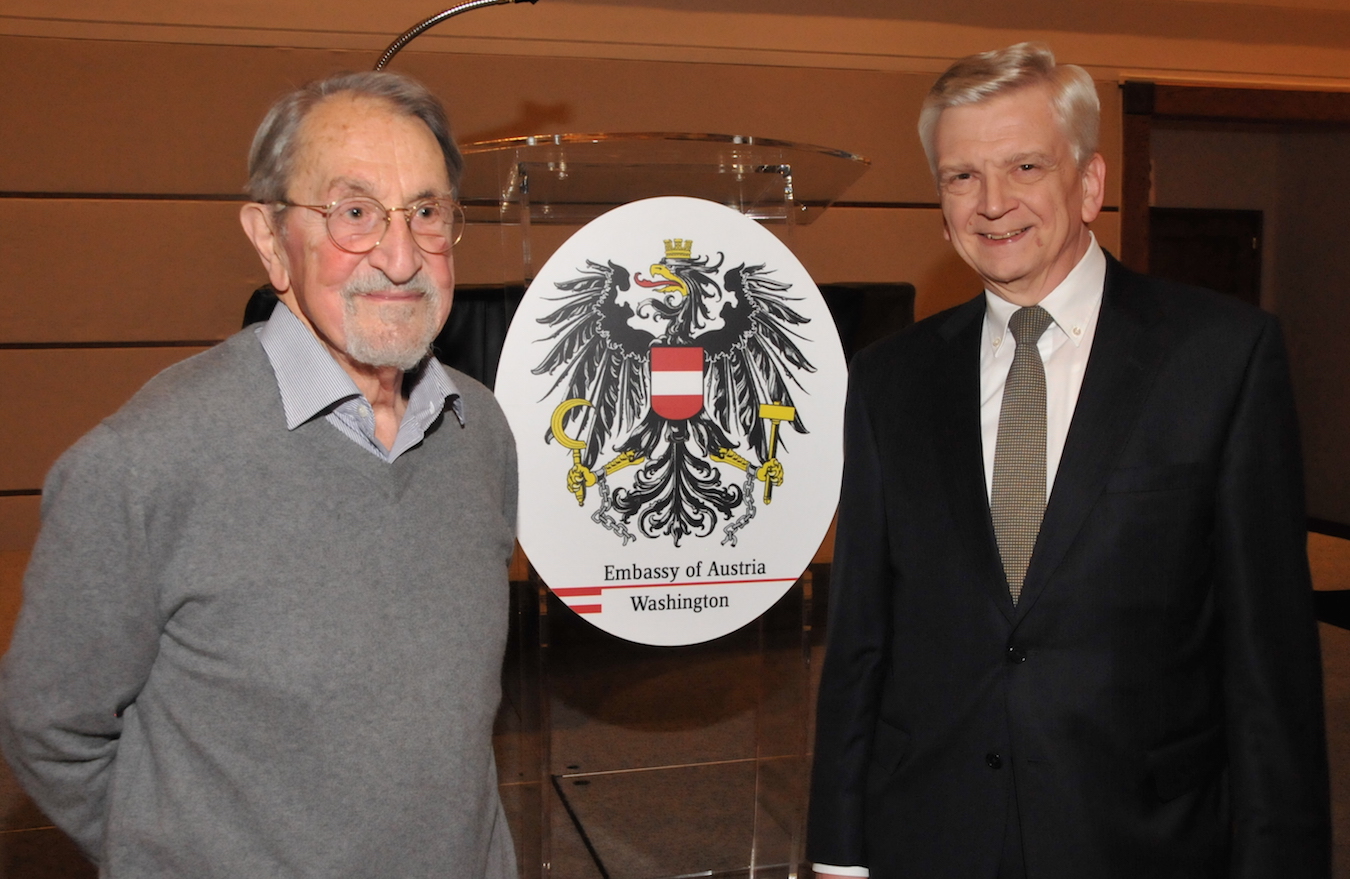 WASHINGTON (JTA) — The opening of an exhibit at the Austrian Embassy in Washington of more than 50 photographs by an 84-year-old Jewish Nobel laureate was something of an amateur hour — twice over.

Both Austria’s ambassador and Martin Karplus, the photographer, referred to the pictures — postcard-style views of Europe in the 1950s and a more recent series on China and India — as hobby rather than high art.

Then at a reception, many of the approximately 250 guests handed their phones to strangers to snap pictures with Karplus — amateur shots of themselves with an amateur photographer.

“I’m not a photographer,” said Karplus, a Harvard professor emeritus who shared the 2013 Nobel in chemistry. “I’m an amateur at this.”

Karplus fled his native Vienna as an 8-year-old with his family. Like many European Jewish refugees, he barely returned to Austria for years. Then everything changed.

“Once I got the Nobel Prize, Austria suddenly realized that I was an interesting person,” said Karplus, who will receive an honorary doctorate in May from the University of Vienna, which will also exhibit his photographs.

The exhibit, which opened Jan. 14 and will run through Feb. 13, comes to Washington from the Austrian Cultural Forum in New York. The photos, which span continents and decades, show people and landscapes that Karplus encountered on his world travels.

One photograph from the 1950s shows Karplus’ parents in Rockport, Mass., standing in front of what appears to be a well-known fishing shack often referred to as the most painted structure in the United States. His father holds his hat in hand while his mother holds her husband’s arm. The work is a study in verticals — a pole behind the father, the wharf pylons and distant telephone lines — balanced by the deep blue of the water visible in the bottom right corner.

A photograph of an Indian boy taken in 2009 fills the composition with the barefoot, crouching boy. The photo is overwhelmingly heavy on cool blues and grays, except for a bright orange bike in the top right corner. The boy’s gaze, intense as he stares at what appears to be rags in his hands, evokes a secular Madonna cradling her child. 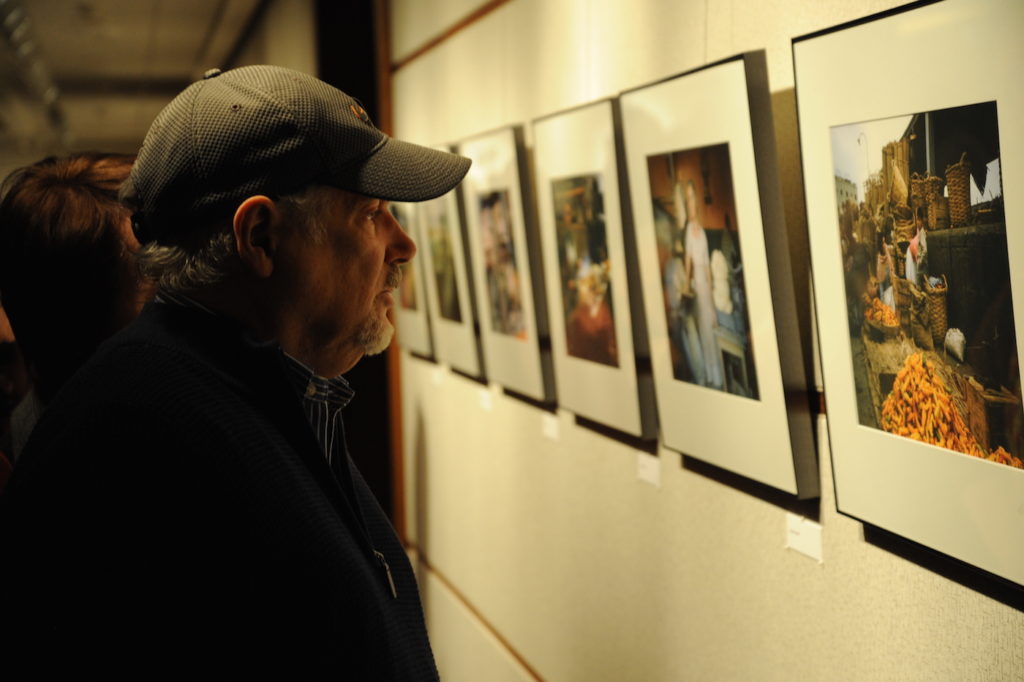 A visitor examines a photo by Nobel laureate Martin Kaplus at the opening of an exhibition of his photographs in Washington, Jan. 14, 2015. (Peter Cutts/Austrian Cultural Forum)

Many other photos in the exhibit, such as a picture of boats taken in Hong Kong in the 1960s, offer the sort of pretty colors and composition that one would expect of postcards — or perhaps an Instagram feed. But in this case, the shots are taken by a Nobel Prize winner.

“Now that I have a Nobel Prize, somehow my value as a photographer has increased a little bit,” Karplus said. “When you get a Nobel Prize, you’re supposed to know everything.”

Karplus initially exhibited his photos at a two-month show at the Austrian Cultural Forum in New York last year. Angelika Schweiger, the cultural officer at the forum and the curator of the embassy exhibit, heard about Karplus from colleagues in New York and decided to bring his work to Washington.

Though he is now celebrated by Austrian public institutions, Karplus freely acknowledged in an interview how shocked he was to discover on a trip to Austria a decade ago how prevalent anti-Semitic sentiment was in the country.

“Unlike Germany, which basically admitted its guilt, Austria still says to many people, ‘We were invaded by Hitler,’” Karplus said.

Hanno Loewy, director of the Jewish Museum of Hohenems in Austria, agrees that the country was “late in comparison to Germany” with critically examining its past.

“For long, the myth of Austria as the ‘first victim’ of the Nazis prevailed,” he said.

An artist statement on Karplus’ website notes that his parents gave him a Leica camera after he earned his doctorate in 1953 and that he subsequently started photographing his European travels.

“Meeting people and being exposed to their cultures, art, architecture, and cuisines was an incredible experience, which has had a lasting effect on my life,” reads the statement. Karplus only began exhibiting his work in 2005.

But for all his achievements, Hans Peter Manz, Austria’s ambassador to Washington, declined to claim Karplus as his own.

“Remember when the German pope was elected? Suddenly [the Germans] were saying, ‘We are pope,’ which is ridiculous,” Manz said. “The same thing happens when one of these guys wins a Nobel. Suddenly you find out, ‘Ah. He’s Austrian.’ The guy left when he was 8 years old. When I introduced him, I didn’t mention it. He did. To claim any piece of his Nobel as a national success is ridiculous.”