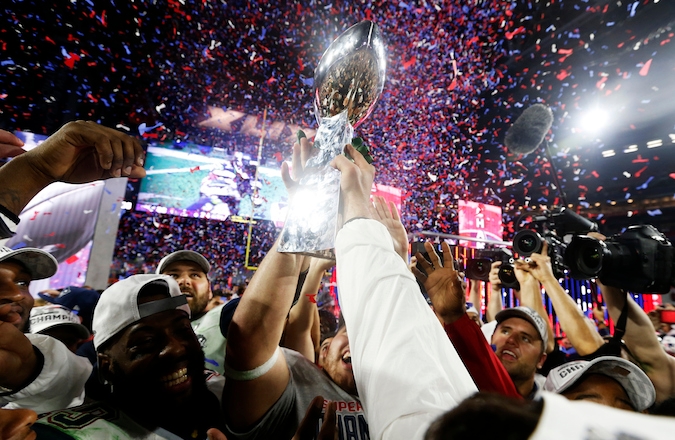 Some Israelis stayed up all night to watch the Patriots win their fourth Super Bowl in 14 years. (Christian Petersen/Getty Images)
Advertisement

TEL AVIV (JTA) — There were wings, beers, giant TV screens, and football fans wearing New England Patriots sweatshirts and Seattle Seahawks jerseys. If not for the fact that it was 1 a.m. and former Israeli Finance Minister Yair Lapid stood in the center of the bar, it could have been mistaken for Anytown USA.

Most Israelis don’t mark Super Bowl Sunday — or, really, Super Bowl Early Monday Morning — in any real way. But a group of Americans in Israel (and some Israelis who became acquainted with American football during stateside stints) showed up past midnight, an hour before the kickoff, putting off sleep and trying to forget about work the next day to watch the big game.

Elie Pieprz, who in 2012 founded a nonprofit to urge American-Israelis to vote in U.S. elections, came to see the game with his 11-year-old daughter, Eliana, in what has become an annual tradition for them. Father and daughter, pulling for Seattle, both wore Washington Redskins jerseys.

“We feel strongly about our connection to America,” Pieprz said. “We didn’t make aliyah to leave America. We’re bringing the best part of America to Israel.”

This Super Bowl party in central Tel Aviv was sponsored by Lapid’s Yesh Atid party, the centrist faction that for now boasts the Knesset’s only American lawmaker, Dov Lipman. Wearing a black sweater along with his trademark black velvet kipah, Lipman appeared chipper at halftime as Katy Perry ascended a robotic lion on a TV screen behind him.

“I thought to myself, there’s enough Anglos in Israel who want to watch, so why not watch it together?” said Lipman, who helped organize the gathering. “It’s not a political event. People are coming to watch the game.”

Some 200 fans attended the party, but most were surprisingly quiet for people who chose to pull an all-nighter to watch the big game. Aside from some hard-core New England fans in the center of the room, much of the crowd timidly cheered for the Seahawks.

“I watched it in the U.S., and I like the thinking behind the game,” said Yochai Zeid, 41, a Yesh Atid activist from Tel Aviv. “It’s a game of strategy and tactics.”

On Sundays, Zeid gets together with a group of five to seven friends to watch the early games at dinnertime in Israel. He was rooting for the Seahawks, he said, because a friend of his is a Seahawks superfan.

Another casual Seahawks fan was Lapid, who said he likes football. Why was he rooting for Seattle?

“Because [fellow lawmaker] Ofer Shelach is going for the Patriots,” Lapid said, shrugging, “so I want to do the opposite.”

Meanwhile, a slightly more energetic crowd of 200 gathered for another Super Bowl party at an event hall in north Tel Aviv, where passions raged even at 4 a.m. The festivities, appropriately, were sponsored by a chicken wings restaurant founded by American immigrant Eytan White. Wings has become a popular hangout for fellow expats since opening last year.

White came up with the idea to open the restaurant after frying wings for a group of American friends who would come together to watch football on Sundays.

“Here in Israel, it’s important to integrate with Israeli society, but it’s also important for you to keep the cultural traditions you had there,” said White, 30. “It’s a strong attachment. I’ve always enjoyed the camaraderie and coming together around a football game.”

At Wings, every pass, run, block and sack elicited a chorus of cheers. The room grew quieter and tenser as the Patriots mounted their comeback and the Seahawks pushed downfield for their final drive. Jermaine Kearse’s crazy bobbled catch, the game-ending interception in the end zone and the bizarre brawl in the waning seconds of the Patriots’ 28-24 victory came with ecstasy, agony and disbelief. Even at 5 a.m., it was hard to feel tired.

Reality began to set in as the party-goers filed out of the atrium and into the Tel Aviv morning. But as a few Americans sat in a shared taxi heading home, “American Pie” came on the radio. For one more moment, it almost felt like America.