Beyond sanctions and kerfuffles, the Iran deal Netanyahu wants to avoid 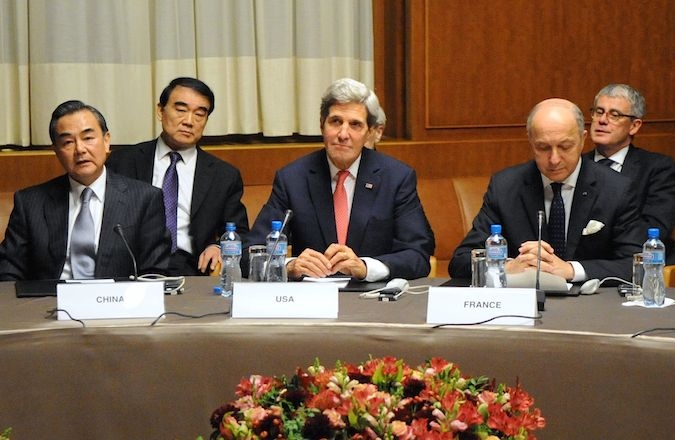 WASHINGTON (JTA) – When Benjamin Netanyahu faces the Congress next month, two things are unlikely to come up in his speech: a consideration of diplomatic protocol and an analysis of the efficacy of sanctions.

Media attention ahead of the speech has focused on the diplomatic crisis set off by the invitation to the Israeli prime minister from U.S. House of Representatives Speaker John Boehner (R-Ohio), who kept President Barack Obama in the dark, and the ensuing political tussle between backers and opponents of new sanctions on Iran.

But Ron Dermer, the Israeli ambassador to Washington who coordinated the invitation with Boehner, has made it clear that Netanyahu’s focus on March 3 will be on the bigger picture: what Netanyahu thinks will be a bad nuclear deal between Iran and the P5+1 nations, the sobriquet for the United States, Russia, China, France, Germany and Britain.

Last week, the White House sparred with Congress over whether new sanctions would scuttle or enhance talks with Iran, but sanctions are no longer the preeminent concern for Israel. Dermer in a Jan. 30 interview with the Atlantic’s Jeffrey Goldberg said Israel is focused now on the endgame.

“We are concerned that [a deal] would leave Iran with an advanced nuclear infrastructure today — relying on intelligence and inspectors to prevent Iran from breaking out or sneaking out to the bomb — and in the foreseeable future enable Iran to have an industrial-sized nuclear program, as the timeframe for this agreement runs out and all sanctions are removed,” Dermer told Goldberg in an email.

Based on interviews with experts on Iran, the nuclear talks and Israel, as well as congressional staffers, there appear to be four broad areas of a possible nuclear deal that worry Netanyahu and which he will likely address in his speech.

Netanyahu believes that Iran should not enrich its uranium and instead should rely on imported uranium for any civilian nuclear program it maintains.

The November 2013 Joint Plan of Action agreement governing the negotiations keeps Iran from enriching to 20 percent, which nuclear experts say is just a few steps short of the 90 percent enrichment that weaponizes uranium. Instead, Iran has been allowed to enrich to 3.5 percent, typical of civilian nuclear programs.

Obama administration officials, including the president himself, have said they would prefer a deal that leaves Iran without a capacity to enrich uranium, but it is likely that Iran will retain the 3.5 percent enrichment capacity.

Netanyahu has said that the distinction between 20 percent and 3.5 percent has become “redundant” because of technological advances.

Kittrie, who is also a law professor at the University of Arizona, said that while his sense is that the Obama administration has “compromised too much” in the talks, a minimal enrichment capacity is a likely outcome of a deal.

Iran maintains what the U.S. Institute of Peace, a congressionally mandated nonpartisan think tank, has described as “the largest and most diverse ballistic missile arsenal in the Middle East,” more so than Israel’s.

Netanyahu is appalled that talks reportedly are not addressing delivery systems, in part because Iran is preparing to test intercontinental ballistic missiles, or  ICBMs, which can reach not just Israel but also the United States.

“They’re not developing those ICBMs for us,” Netanyahu told CBS in 2013, when the terms of the Joint Plan of Action were being negotiated. “They can reach us with what they have. It’s for you.”

Heather Hurlburt, the director of the New Models for Policy Change project at the New America Foundation, which backs the talks, said adding delivery systems to the mix would drive away negotiators Russia and China, as well as a number of countries currently backing the sanctions regime.

“Some members of the P5+1 are not interested in Iran becoming a regional player without a missile capacity,” noting the deterrent effect that Iran’s missile capacity has on Western allies Pakistan, Saudi Arabia and the NATO alliance. “If what you need is global pressure to get something done, you have to negotiate with what the global community can bear.”

The Jerusalem Post reported in November that Israel had been briefed on the outlines of an agreement that included a “sunset clause,” ending the inspections regime and the limits on enrichment after an unspecified number of years.

“After this period of time, Iran is basically free to do whatever it wants,” an Israeli official told the newspaper.

Alireza Nader, an Iran analyst at the Rand Corp., a think tank that advises the Pentagon, said anxieties surrounding the “sunset clause” are premature because its terms have not been specified.

“How many years are we talking about in terms of the sunset clause? We don’t know,” he said. “A lot of assumptions are being made.”

Hurlburt said no country would agree to be bound by a permanent inspections regime, and Iran’s interlocutors at the talks understand that.

“No one involved in the negotiations thinks you can get a deal for perpetuity,” she said.

Kittrie said not including delivery systems in the talks allows Iran to accelerate its military development in one area, even though it may be acceding to limitations in another, which would hasten weaponization should the deal fall through.

“Iran could lie low and continue advancing those aspects not part of the deal, perfecting missiles,” he said.

Israel fears that a nuclear deal will allow Iran to focus on its disruptive activities in the region and draw into its orbit nations that until now have resisted its hegemony. Even without a nuclear program, expanding Iran’s influence poses significant dangers to Israel, Dermer told Goldberg.

“Iran’s regime is not only committed to Israel’s destruction, it is working towards Israel’s destruction,” he said. “It has used Hezbollah, Hamas, Islamic Jihad, and other proxies to fire thousands of rockets and threaten Israel from Lebanon, Gaza, the Sinai, and the Golan Heights.”

Nader said that Iranian influence was a function of the strengthening in recent years of larger regional powers like Iran, Saudi Arabia and Turkey, and the collapse of weaker states such as Yemen, Iraq and Syria.

“Having the capability to enrich uranium in itself is not going to make Iran more powerful,” he said.

Hurlburt said pulling away from talks would accelerate Iran’s nuclear track — and its influence. The problem, she said, is that more pressure on Iran or military strikes, an option that some believe Israel is considering, would be counterproductive — “[making] Iran more intransigent, more likely to develop a weapon.”