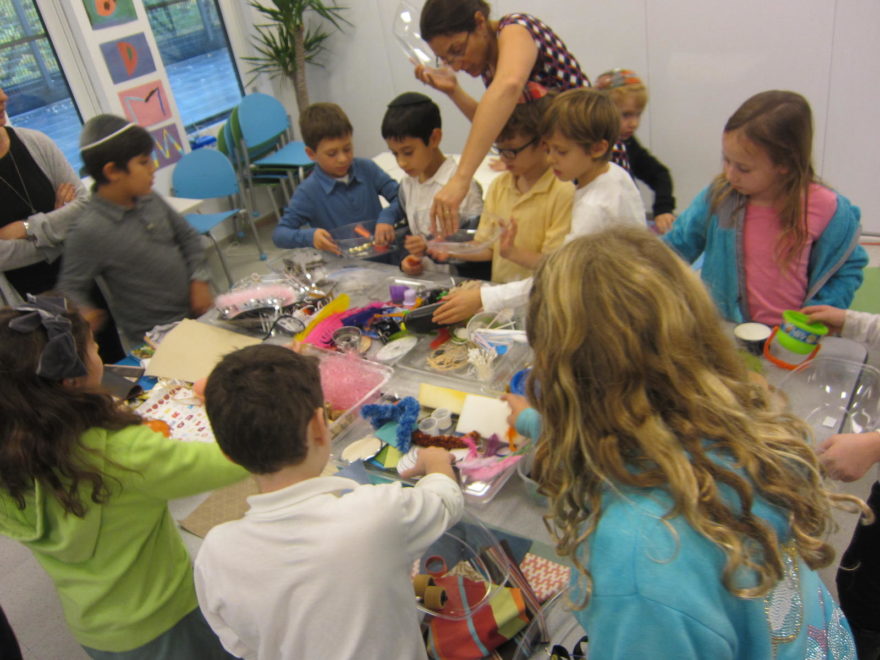 Shefa students work on an art project in which they make self-portrait collages. (Courtesy of The Shefa School)
Advertisement

Shefa students working on an art project in which they make self-portrait collages. (Courtesy of The Shefa School)

NEW YORK (JTA) — For years, homework was a “battle” in Johanna Shlomovich’s home.

Her son, Gavi, is dyslexic and had been struggling since pre-kindergarten. By third grade, he was still reading well below grade level and falling behind in all the subjects at his modern Orthodox day school except gym, art and science.

Now just five months into fourth grade, Gavi enjoys reading. And after school, “instead of spending time with reading tutors and hours and hours of homework that goes bad, he gets to spend time doing music lessons, woodworking classes and things kids should be doing after school instead of struggling,” Shlomovich said.

The difference? He transferred this year to The Shefa School, a pluralistic Jewish day school specifically for children with language-based learning disabilities.

Shefa, Hebrew for “abundance,” is the only Jewish day school of its kind in North America.

Opened in September with 24 students in grades 2-5, the Manhattan school serves children who advocates say are not getting the support they need in existing Jewish schools, which have long been criticized for their failure to make accommodations for children with disabilities.

Its creation has sharpened a longstanding debate between advocates who believe it preferable to mainstream children with disabilities in all cases and those who see specialized institutions as equally valid options.

“It’s important to have different options for families,” said Ilana Ruskay-Kidd, Shefa’s founder and head of school. “I don’t think there’s only one approach, and we’re certainly not pushing against inclusion.”

Jay Ruderman, the president of the Ruderman Family Foundation and a leading advocate for greater inclusion in the Jewish world, said it would have been preferable not to have to establish a specialized school for kids with disabilities.

“What would have been better is if existing Jewish day schools would become accessible for children with disabilities and you wouldn’t have to have a separate, segregated school,” Ruderman said. 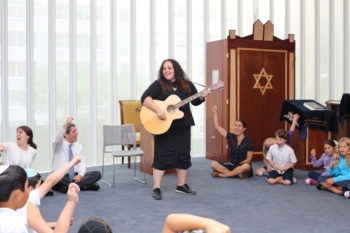 Shefa students and teachers preparing for Shabbat with music and song. (Courtesy of The Shefa School)

Ruskay-Kidd is quick to note that her school has not singlehandedly solved the problem of day schools inadequately serving children with special needs. For one thing the school, which focuses on language-based disabilities — the type that Ruskay-Kidd says affect the largest number of children — does not enroll children with more severe disabilities like autism, profound intellectual disabilities (what used to be known as mental retardation), or major social and emotional problems.

But the fact that it draws students from as far away as New Jersey and suburban Westchester County and Long Island “speaks to parents’ desperation,” Ruskay-Kidd said.

The school, which plans to double in size next year and eventually expand to a full K-8 program, is not just geographically diverse but religiously diverse, attracting families who run the gamut from haredi Orthodox to secular. Classes are small — a combined class of second- and third-graders has 12 students and two teachers — and during elective periods, children can meet with therapists, either one-on-one or in small groups. The faculty also includes an occupational therapist, a language and speech pathologist, and a learning specialist.

The extra attention is not cheap. Tuition, while comparable to secular private schools for children with disabilities, is $48,500, roughly twice that of other area day schools. The school gives out more than $256,000 in financial aid and more than one-third of families receive some tuition assistance.

On a recent Thursday morning, Shefa’s fourth- and fifth-graders were discussing the terror attacks in Paris, while the second- and third-graders were scattered in groups for electives. In the kitchen, several children helped prepare a dish with carrots and snow peas, while across the hall four children and a teacher constructed an electronic car. In another room, two boys and a teacher puzzled together over an origami creation.

Some Shefa students have dyslexia and struggle with the mechanics of reading. Others decode words easily but have trouble comprehending, often because they need more time to process the information.

The disabilities, however, are not readily visible to a visitor. Other than the small size of the classes and the minimalist decor — the white walls have fewer decorations than typical school classrooms to help minimize distractions — Shefa seems much like any other Jewish school.

“Shefa kids are much more typical than people expect,” Ruskay-Kidd said. “They’re comfortable and feel good here. They might have been acting out in another school because they were frustrated.”

Shefa’s creation does not mean other area day schools are “off the hook” when it comes to accommodating children with disabilities, Ruskay-Kidd said. Instead, she sees Shefa as a resource for improving services at other schools. For the past year, the school has been convening regular meetings for professionals from approximately 20 area day schools to share best practices.

Dori Frumin Kirshner, executive director of Matan, a nonprofit that trains Jewish educational leadership to be inclusive of children with disabilities, said she has heard positive reports about Shefa.

As for criticisms that the school segregates children or is too narrow in focus, Frumin Kirshner said Shefa’s strategy “of getting very good at meeting the needs of a particular type of learner means that they can expand that circle and potentially be inclusive of other types of learners down the line.”

“They have to start somewhere,” she said. “By becoming a real entity, Shefa has entered a playing field that needed some catalyzing.”