From the Archive: The Star of David myth and the World War II rescue of Danish Jewry 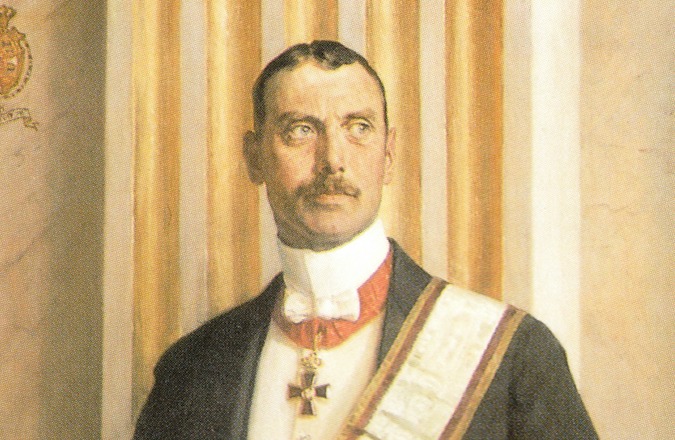 King Christian X of Denmark was rumored to have worn a Star of David badge during World War II. (Wikimedia Commons)
Advertisement

Last weekend, Denmark was shocked by the latest terrorist attack on a European Jewish institution. After shooting up a Copenhagen cafe, a gunman attacked the city’s main synagogue, killing a Jewish security guard.

Danish Jews have been encouraged by the response of their government and fellow citizens to the attack. “The response of Danish society has been fantastic,” one of the country’s former chief rabbis told JTA.

This show of Danish solidarity recalls one of World War II’s most well-known stories and one of its most intriguing myths.

When the Nazis invaded Denmark in 1940, they did not impose harsh anti-Semitic laws at first. Denmark’s neutrality and its cooperation with the German invaders allowed the country to retain relative political autonomy for a few years.

The Danish government was also protective of its Jews in the years prior to the German occupation. In 1937, JTA reported that four members of Denmark’s wing of the Nazi party were arrested for defaming Jews in journalistic pamphlets and posters.

When the Nazis began to implement anti-Semitic policies shortly after the invasion, the Danish government and its citizens held their ground. According to a JTA report from 1940, the Nazis implemented a number of measures to marginalize Denmark’s Jews:

[T]he 5,000 or so Jews of Copenhagen, Denmark along with the 1,000 or so German refugees there are beginning to suffer, step by step, all the well known humiliations of the Nazi anti-Semitic program … No plays by Jewish dramatists may any longer be presented on the Danish stage and no Jewish actors may exercise their profession … Jewish students have been expelled from public and private schools. All Jewish physicians, lawyers, teachers and other professionals have lost their livelihoods … Hundreds of Jewish refugee youths who were being trained on Danish farms for emigration as farmers … have been expelled from the farms and sent back to concentration camps in Germany.

JTA then chronicled the “pro-Jewish attitude” of the Danish response:

Indicative of the pro-Jewish attitude of the Danish people is an article in the Skydebjerg-Asrup Church Gazette … Declaring that the Danish people will not tolerate anti-Semitism, the article continues: “Our Danish minds will not let themselves become infected by this disease. We have been vaccinated against it by popular education. We have no use for a scapegoat … Anti-Jewish legislation is tantamount to lawlessness and if we forsake justice then we will be submitted to a degradation worse than war and suppression.

Danish King Christian X responded with his own remarkable show of solidarity. In 1942, JTA reported that in response to Nazi requests that he solve his “Jewish problem” by instituting the Nuremberg Laws and other anti-Semitic regulations, Christian said: “We have never considered ourselves inferior to the Jews, hence we have no such problem in Denmark.”

This courageous rebuke of Nazi policies may have helped spur the creation of a myth that many still believe today, that Christian X wore a yellow Star of David during the war to identify with Danish Jews who were forced to wear the infamous badge marking their religion.

Several sources cite as the impetus for the myth a meeting that JTA reported on in 1942:

King Christian of Denmark, receiving a delegation of Copenhagen Jews on Sept, 27, on the occasion of his birthday, told them that if the Germans forced the Jews in the country to wear a yellow Mogen David badge, he would wear a yellow star upon his uniform in public and would order the entire royal household to follow suit…

However, unlike most Jews in Nazi-occupied Europe, Danish Jews were never forced to wear the yellow Star of David. The fable may have been deliberately disseminated by the Danish press to counteract suggestions from Allied forces that Denmark did not put up enough resistance to Hitler during the occupation.

Nevertheless, Denmark’s pro-Jewish attitude led to a certifiable non-fiction: the rescue of thousands of the country’s Jews during the Holocaust.

In 1943, facing the imminent deportation of all Danish Jews, an underground network of Danes planned to secretly ship Jews to Sweden. On Oct. 3, Swedish newspapers declared their “strong support” for their government’s offer to shelter all 6,000 of Denmark’s remaining Jews. On Oct. 4, JTA reported that over 1,000 Jews had reached Sweden over the course of a few days:

Swedish authorities today announced over the radio that the influx of hundreds of Jewish refugees from Denmark continues despite the measures which the Gestapo has taken to make flight into Sweden impossible.

Some did not make it out by Oct. 6, when what JTA termed a “Gestapo manhunt” rooted out the remaining Danish Jews who had been hiding in the hopes of escape. But by the end of the war, it became widely known that Denmark had helped save over 6,000 Jews from certain deportation and likely death.