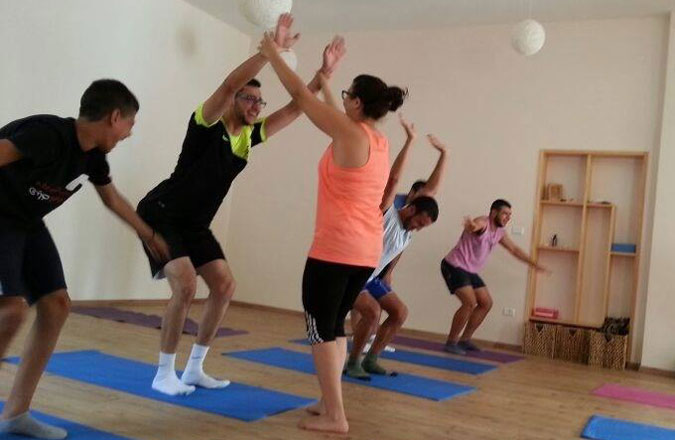 I followed the instructor’s soft but firm voice as she led me and five other women through the yoga poses, and the deep breathing helped to calm my nerves. The large tiled room was gently lit through white curtains that masked the busy city life outside Farashe Yoga.

Farashe is Arabic for butterfly, and the busy city outside the studio’s walls is Ramallah.

Exhale into your reverse warrior, the instructor guided us. I complied, letting out a long-held breath.

Ramallah is just six miles north of Jerusalem. But to get there from Jerusalem requires passing through the Kalandia checkpoint, which can take anywhere from 10 minutes to two hours. A red sign outside the checkpoint reads “This Road leads To Area ‘A’ Under The Palestinian Authority/ The Entrance For Israeli Citizens Is Forbidden, Dangerous To Your Lives And Is Against The Israeli Law.”

Area A is under Palestinian jurisdiction. Cars like the one I was in, rented in Israel, are not insured there. But my American passport pacified the Israeli soldier manning the checkpoint and we were waved through without delay.

Farashe is near the center of Ramallah, through a lively marketplace, where fruit and vegetable vendors shout out the prices of persimmons, dates and the largest cabbages I have ever seen. Past the famous stone lions of the Al Manara Square and across the street from the Stars & Bucks Cafe (its motto, according to a server, is “Let Starbucks come to Ramallah and sue us”) sits the stone building that is home to the studio. Behind a green door, up a stairway littered with cigarette butts and fast food wrappers, is the yoga studio. The class cost 20 shekels, or about $5.

When I initially reached out to Farashe, I was told by a man named Ibrahim that I would be “more than welcome to attend.” But when I told them I was a journalist from a Jewish publication, Ibrahim responded, “Farashe has a very strict policy about which media channels to talk (sic), as we are an organization that abides by BDS regulations,” referring to the Boycott, Divestment and Sanctions movement, which attempts to place political pressure on and economically isolate Israel.

My request for an interview, he told me, had been denied.

Knowing I was not welcome, I kept a low profile as I inexpertly made my way through the Vinyasa yoga practice. 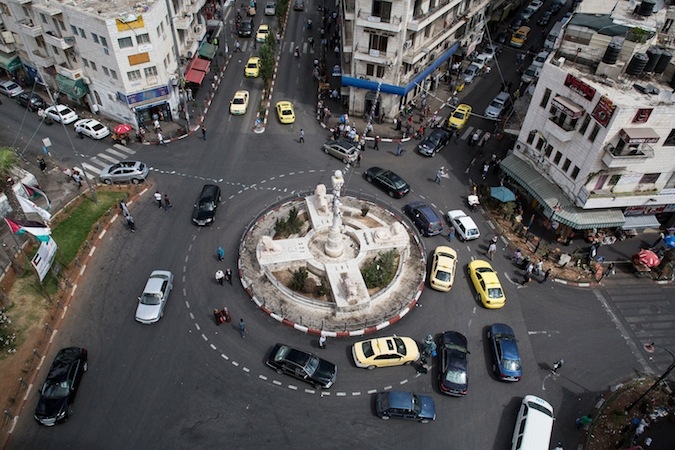 But the atmosphere inside put me at ease. The instructor was accommodating and generous, and she and my fellow yogis — a mixed-age group dressed in linen or yoga pants, hair uncovered — were oblivious to my failed negotiations with the studio’s media representative. The instructor asked my name and if it was my first time at Farashe.

Farashe opened in November 2010. Everything — the space, the mats and the five instructors’ time — had been donated by volunteers and benefactors “within Palestine and from abroad,” according to the studio’s website.

Yoga has long been trendy in Israel among urban sophisticates and religious Jews. And the practice has been found to improve mood and enhance productivity among Israeli schoolchildren impacted by war. There are dozens of yoga studios and yoga practices in and around Tel Aviv, including classes offering vocal yoga, which involves singing, and Acroyoga, which incorporates acrobatics.

And now yoga is increasingly popular among Palestinians, too. In Gaza, the Palestinian Red Crescent Society offers yoga classes to help with stress and Post Traumatic Stress Disorder. There are also some private yoga enthusiasts, like a woman from Gaza City whose Twitter feed @WhateverInGaza has 13,000 followers. But there are no known designated studios in the Hamas-led strip.

Yoga can provide great benefits for war-torn areas. Robin Carnes is co-founder and executive director of Warriors at Ease, an organization that brings yoga and meditation to military communities. Carnes in a phone interview explained the effects of traumatic stress on the brain — how it can impair judgment and internal monitoring of emotions.

“With a good trauma-sensitive teacher, you can slowly begin to re-enter, re-inhabit your body in a way that isn’t overwhelming and feels safe again,” Carnes said.

To meet the growing demand for yoga in the Palestinian territories, Anahata Grace International, a nonprofit based in Washington, partnered with Farashe to organize a training session in 2013 for 20 women in Ramallah. The same year, a Canadian organization, the Olive Tree Yoga Foundation, offered two 200-hour teacher-training sessions in the Ayda refugee camp in Bethlehem.

“We see it as a form of empowerment and a way to create space in your own life for possibilities,” said Paul van Wijk, the president of Olive Tree, which has trained instructors who now teach classes to Palestinians in the West Bank cities of Ramallah, Bethlehem and Hebron.

Most recently, two Palestinian women are in the process of opening a yoga studio in Beit Jala, near Bethlehem, called Beit Ashams, or House of Sun. The studio has already started offering classes — some gender segregated (including prenatal yoga), some coed and some geared to children.

Eilda Zaghmout, one of the founders, was trained by Olive Tree.

Her family fled Beit Jala for Amman, Jordan, in 1967 following the Six-Day War with Israel. Her father always dreamed of returning home. But when they finally came back in 1999, they were faced with what Zaghmout called the “ugliness” of the deadly Second Intifada, or Palestinian uprising. Like other Palestinians, the family faced restrictions on movement, curfews and long lines when they were permitted to leave their homes.

Zaghmout, who comes from a “Christian background,” sees yoga as particularly beneficial in a land marred by a seemingly endless cycle of violence.

Indeed, she had long intended to begin practicing yoga. But with two young children at home, life kept getting in the way. But, she said, “there’s a point in your life when you’re like, ‘hallas,’ that’s it, I’m going to ask for help.” Her husband was supportive, and within a year she had her yoga teacher’s license.

Eager to share her newfound practice with her community, Zaghmout was faced with a common “misperception” in her community — that anything associated with the Far East was shunned for being atheist or Buddhist. Zaghmout had to find the right language to introduce yoga to Bethlehem. She invited members of her community to come and experience yoga for themselves, and she spoke about yoga as a tool for releasing stress.

She believes that the reason yoga is taking off now has to do with increased awareness about the awareness of self-care.

“People are getting more aware of stress, high blood pressure, breast cancer,” Zaghmout said, noting that especially women and activists struggle with finding time and allowance to take care of themselves. Doing so “challenges perceptions about women in my community, where women are supposed to sacrifice,” she said.

She added: “This land has suffered heavy blood. It’s time we start realizing peace inside of us so we can realize it outside.”

Meanwhile, back inside at Farashe, the class ended with the instructor calling for Shavasana, or the “corpse pose,” which has practitioners lying flat on their backs, arms to the sides, palms up. As I lay there, I found myself wishing for fewer corpses in this troubled land, and for warriors on both sides of the checkpoint to reverse direction and find a new practice.