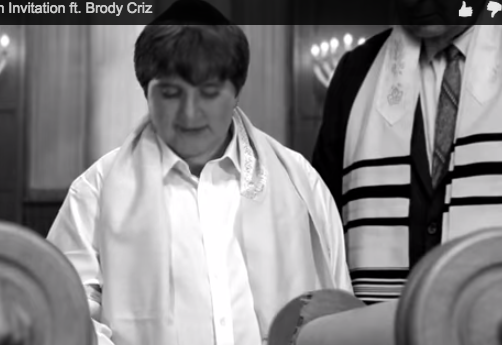 This time it’s for the impending bar mitzvah of Brody Criz, whose invitation consists of him starring in a Jew-ified medley of pop-song parodies — including one of “Blurred Lines,” the song to which Miley Cyrus famously twerked. Fortunately, Criz doesn’t twerk, but he does bare way more skin than I’d like to see, even if I weren’t more than three times his age.

In cases like this, it’s easy to pile on with judgments about materialism, superficiality, “all bar, no mitzvah” and so on. And were I to join that chorus, I’d no doubt be met with an onslaught of “lighten up” and “it’s all in good fun”-type responses.

But it’s also hard not to be a little horrified at this latest installment in both the annals of keeping up with the neighbor’s bar mitzvah and YouTube self-promotion. Especially when one finds out that Criz’s video, was produced by a “team of professionals, including filmmakers, writers and actors.”

According to The Daily Beast, these videos cost $3,000 to $5,000 to produce. And they often come in addition to a $3,000-$6,000 professionally produced video montage screened at the party. Not to mention the expenditures on catering, DJs, clothing, swag and who knows what else.

I’m particularly horrified and judge-y because my oldest daughter, who is in sixth grade, is quickly approaching bat mitzvah age and we’re planning on something very low-key. This is made easier by the fact that the public school she attends has few Jewish kids, so we’ll avoid the peer pressure born of attending the lavish affairs of her friends.

Instead, the Jewish education program she attends, the Jewish Journey Project, offers a b’nai mitzvah alternative called Brit Atid (Hebrew for “covenant of the future”), in which kids have a group ceremony followed by a group party. I’m excited about this not only because it spares me from having to plan a huge event all on my own and saves a lot of money (each family is limited to a guest list of 30 people), but because I like the message of bat mitzvah as a communal event, rather than a gala tribute to an individual 13-year-old.

Indeed, the thing that disturbed me most about Brody Criz’s viral video is not the conspicuous consumption or overexposure — in Criz’s case, quite literally — but how, toward the end of the video, Criz says: “It’s all about me.” Which, of course, pretty well sums up the whole thing.

How sad, considering that, as I understand it, the bar/bat mitzvah marks one’s entry into the community of Jewish adults, the first time in which one counts in a minyan, the quorum of Jews required for certain prayers.

When it comes to life-cycle events, I realize I may go too far in the opposite direction. For my wedding, I wore an off-the-rack $100 dress and didn’t bother with makeup or even getting any help with my hair, something I regret every time I look at the photos. For my younger daughter’s Jewish naming ceremony, the reception was potluck, which perhaps some people found overly thrifty. And it’s not always nice when parents force their countercultural values on their children, particularly at an age when kids crave conformity.

Fortunately for me, my older daughter so far is even more thrifty, nonconformist and judgmental than I am, so that won’t be an issue. If there’s going to be any video related to her bat mitzvah, I suspect it will be a homemade stop-motion animation one. She and her sister are avid filmmakers and have made a festival’s worth of videos starring their Playmobil figures, Barbie dolls and various American Girl paper dolls they’ve made by gluing pictures cut from the catalog onto cardboard. Maybe it will be an interpretation of her Torah portion or a movie that attempts to convert others over to vegetarianism, her other passion.

In any case, it probably won’t go viral. And that’s fine with me.