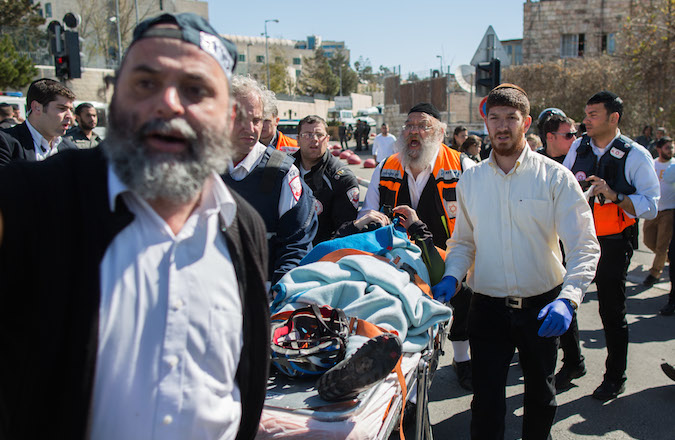 Medics carry a wounded person at the scene of an terror attack in Jerusalem on March 6, 2015 (Yonatan Sindel/Flash90)
Advertisement

(JTA) — Seven people sustained moderate to minor injuries when a car rammed into a group of pedestrians standing at a light rail station in east Jerusalem.

Six of the injured are female Border Guard officers who were in uniform when the car hit them, Army Radio reported. Two of the women sustained moderate injuries while the rest suffered minor injuries.

The seventh injured was a civilian cyclist, who had moderate injuries, Israel Radio reported.

Police said the driver veered from the road onto the sidewalk, before getting out of the vehicle with a knife. He was shot and wounded by a security guard.

Susan Turnbull, the chairwoman of the Jewish Council for Public Affairs, who is in Israel this week, was in a car near the scene of the attack.

“We saw probably 20 police arrive from every direction within moments,” she told JTA in an email. “The immediate response is breath-taking to behold with police and medical personnel aided by onlookers in a flash.”

The car used for the attack is registered to an address in Ras al Amud, an eastern neighborhood of Jerusalem. Israel Radio named the alleged attacker as Mohammed Salaimeh, a resident of the neighborhood.

The attack happened on Purim, a Jewish holiday that has been the occasion of terrorist attacks in the past.