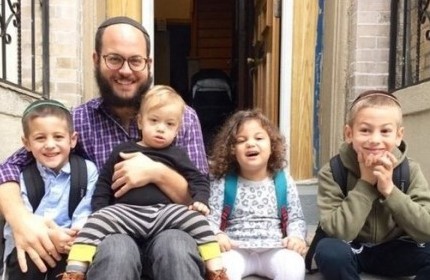 Nadiv Kehaty with his four children, who are all under the age of 7. (Courtesy of Charidy.com)
Advertisement

On Sunday night, the Jewish community in Crown Heights, Brooklyn was shocked by the sudden death of Nadiv Kehaty, 30, a father of four.

Kehaty, a real estate agent who helped found a local Crown Heights synagogue named Itchke’s Shtiebel, did not have life insurance. He collapsed at an event Sunday night at his son’s yeshiva school, suffering an apparent heart attack.

Fortunately, one of Kehaty’s closest friends was Moshe Hecht, a co-founder of Charidy.com, a crowdfunding platform that matches donors willing to quadruple people’s donations to charity and nonprofit causes.

Hecht got together with some of Kehaty’s other friends and decided to start a Charidy campaign for the Kehaty family.

The results were inspiring.

Since Monday, the Charidy campaign, combined with a smaller (but nevertheless substantial) campaign started on fellow crowdfunding site GoFundMe, has raised over $900,000.

In Hecht’s words, the cause “went viral.”

“It was obvious that a lot of people donating didn’t know [Nadiv] and that this campaign went well and beyond his first circle of friends and family,” Hecht said.

Charidy, which was founded by Hecht, Yehuda Gurwitz and Ari Schapiro in 2013, partners each campaign with “Matchers,” who are willing to quadruple the total donation pool. Unlike other platforms that offer campaigns varying lengths of time to reach a goal, each Charidy campaign has only 24 hours to raise its target amount — and no money is earned if the goal isn’t reached.

Most of the nonprofits that have raised money through Charidy have been Jewish organizations, because it was first publicized in New York’s Chabad community. However, Hecht says that his goal is to expand its base of users beyond the Jewish community. In April, for example, the company is planning a day of fundraising for nonprofits of all kinds that aid victims of sexual abuse.

So far, Hecht says that Charidy has a 100 percent success rate, meaning that every campaign has reached its goal in 24 hours.

The $702,398 raised by the Kehaty Charidy campaign (which reached its goal of $253,000 in two hours) was by far the largest amount of money raised in the company’s short lifespan. Hecht said that the day of the campaign drew 50,000 unique visitors to the site — more than double the traffic of any previous day, including one day that involved 20 separate campaigns.

“It’s interesting that over the last few days everyone thought Nadiv was his best friend,” Hecht said. “He was literally the guy with the biggest heart in the whole world. Really a larger than life person.”

Those interested can still donate to this cause here.