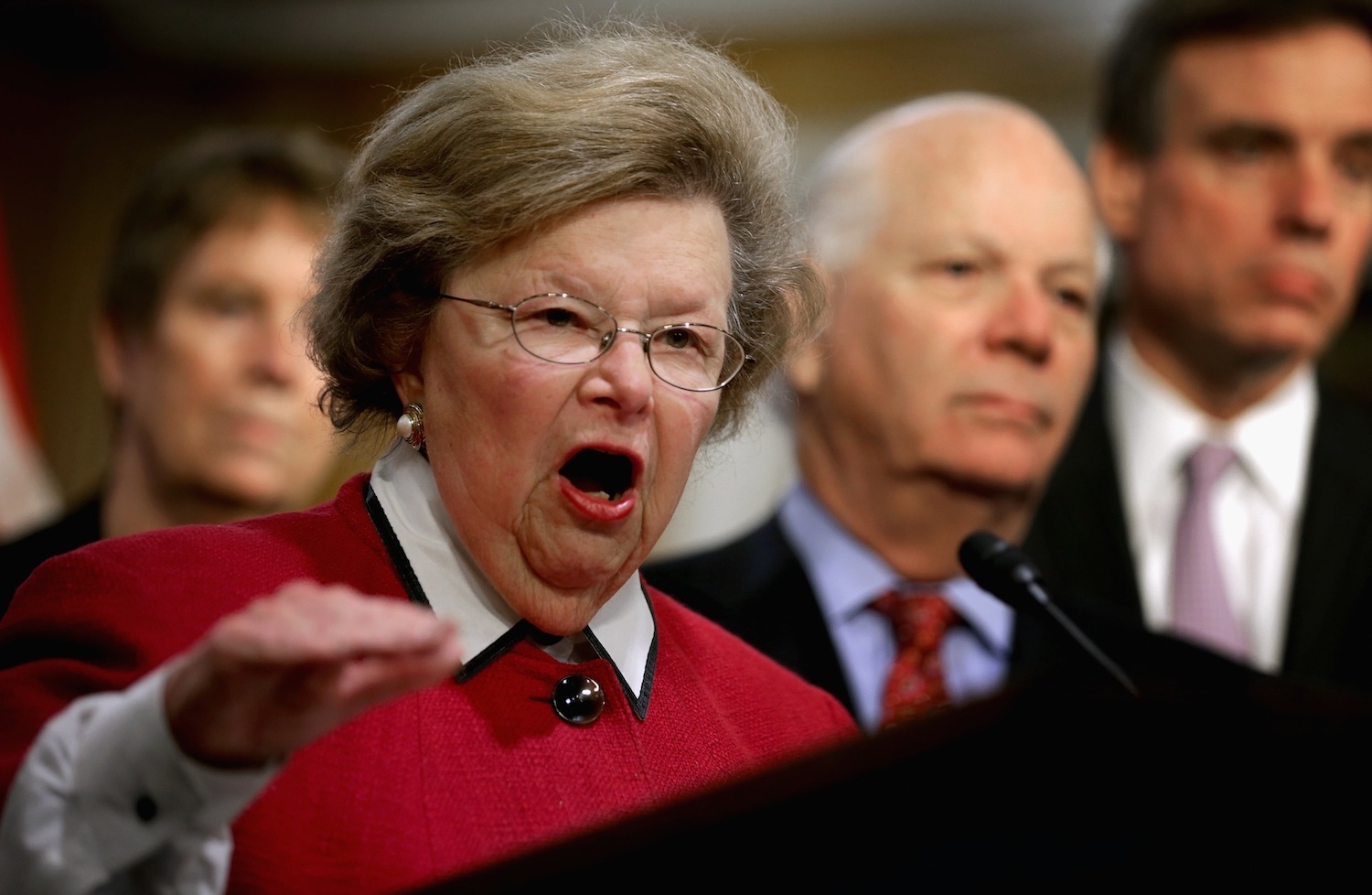 WASHINGTON (Washington Jewish Week) — The pending departure of U.S. Sen. Barbara Mikulski (D-Md.) has the Jewish community wondering who will fill the vacuum left by the fiercely pro-Israel liberal leader.

Mikulski’s announcement on March 2 that she would not seek re-election in 2016 triggered fond memories for Jewish leaders of the career of the longest-serving woman in Congress’ upper chamber, as well as anxieties about who would take her place.

“During her many years in Congress, Senator Mikulski has been a stalwart supporter of the U.S.-Israel relationship,” said Marshall Wittmann, the spokesman for the American Israel Public Affairs Committee, “particularly in her leadership role on the Appropriations Committee in ensuring vital security assistance for our democratic ally.”

Mikulski, 78, represents what some in the pro-Israel community fear is a vanishing breed: a staunch liberal who earns kudos on the left for her advocacy on issues like women’s rights and combating poverty yet one who is also unstinting in support of Israel.

“In an era when we’re beginning to see some seepage among some of those on the left in support of Israel, I think her strength stood out and was a galvanizing force,” said Ron Halber, executive director of the Jewish Community Relations Council of Greater Washington.

As chairwoman from 2012 to 2015 of the powerful Senate Appropriations Committee, Mikulski was the lead voice when her committee drew up its annual federal budget. She was a principal player in defense funding, which included significant levels of military aid to Israel and money for joint projects such as the Iron Dome missile defense system. That included last year’s unanimous passage of $225 million in emergency funding to supply Israel with additional Iron Dome munitions after its stockpile was depleted in last summer’s war in the Gaza Strip.

“Jewish Democrats couldn’t design a better elected official,” Halber said. “She not only stood up for the most progressive values in the Jewish community, but she was also a consummate professional and always willing to go across the aisle to work with Republicans to pass legislation.”

Domestically, Mikulski was the key architect of Department of Homeland Security funding for nonprofits, an initiative that dispensed millions of dollars annually since its inception in the mid-2000s, much of it to Jewish institutions seeking to upgrade their defenses.

“She was a real champion for [the program] from its inception and helped us ensure that funds were appropriated for it each year, including this year, which was a very difficult year,” said Nathan Diament, the Washington director of the Orthodox Union Advocacy Center, which lobbied for the funding together with the Jewish Federations of North America and Agudath Israel of America.

Despite the recent congressional fight on Homeland Security funding over unrelated immigration issues, $13 million went to the nonprofit grant for fiscal year 2015, in large part because of Mikulski.

Mikulski, a Catholic whose grandparents immigrated from Poland, has said she feels a connection to Jews and Holocaust survivors in particular. On Jan. 27, she introduced a resolution to commemorate the 70th anniversary of the liberation of Auschwitz co-sponsored by Sens. Ben Cardin (D-Md.) and Mark Kirk (R-Ill.).

“As someone who is very proud of her Polish-American heritage, I visited Auschwitz,” Mikulski said from the Senate floor.

“I wanted to see it when I had the chance to learn more about my own heritage. I wanted to see what happened there so that I would remember,” she said. “Touring the concentration camp was an experience for me that was searing. Even today I carry it not only in my mind’s eye, but I carry it in my heart. You know I’m a fairly strong, resilient person. I think we’ve even shared stories that I was a child abuse social worker. I have seen tough things, but I wasn’t prepared for what I saw that day.

“I knew when I left Auschwitz, I knew and I understood why, first of all, we should never have genocide in the world again,” Mikulski continued. “The second thing, and also so crucial to my views, is that there always needs to be a homeland for the Jewish people. It’s the reason we always need an Israel. Why it has to be there, survivable for the ages and for all who seek a home there and refuge there.”

Jewish communities in Baltimore and in Washington’s Maryland suburbs still have a Senate address in Cardin, a scion of one of the leading Jewish political families in the region. Still, the departure of a senator with 25 years of experience will be felt.

“This is not a knock on any of her potential successors but because of her seniority — last year she was the chairwoman of the Appropriations Committee and now she’s the ranking Democrat,” Diament said. “That is a lot of ground to make up no matter who succeeds her.”

The two declared candidates for Mikulski’s seat, Reps. Chris Van Hollen and Donna Edwards, both of Maryland, have had uneven relationships with the pro-Israel community.

Van Hollen surprised Jewish backers in 2006 when he wrote the Bush administration saying Israel’s bombing of Lebanon that summer harmed U.S. and Israeli interests. He later walked back the comments and, by 2008, when he was heading the Democrats’ congressional election committee, was strongly backing Israel in its 2008 campaign in Gaza.

Edwards, whose House of Representatives runs have been endorsed by J Street, the liberal Jewish Middle East policy group, has clashed with center and right-wing pro-Israel groups, particularly over her sharp criticisms of Israel’s settlement policies.