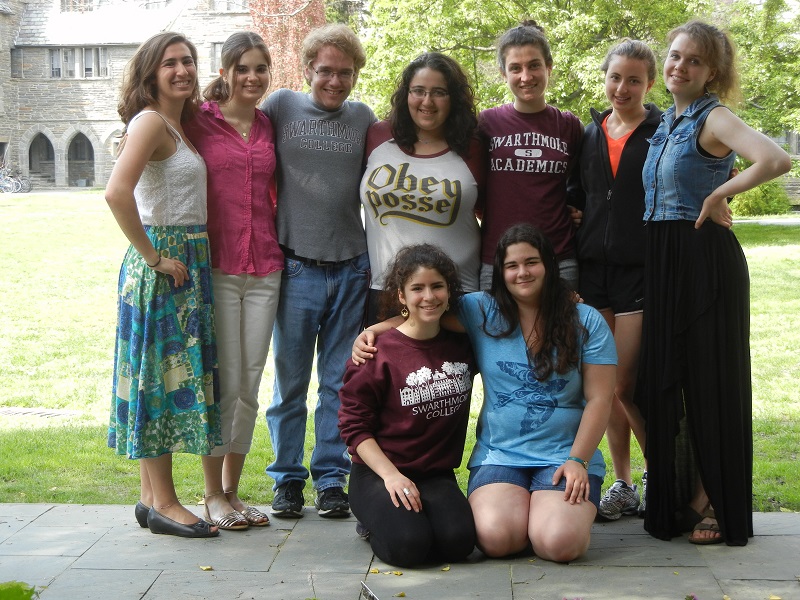 The Hillel student board at Swarthmore College in 2013-14, when Swarthmore became the site of the nation's first Open Hillel. (Courtesy Sarah Revesz)
Advertisement

Following an extended debate, the 11-member board elected late Monday night in a 7-3 vote to drop the affiliation, effective immediately (one board member was absent).

In December 2013, the Hillel of Swarthmore College declared itself an Open Hillel, saying it would not abide by Hillel International’s rules prohibiting partnering with or hosting groups or speakers who deny Israel’s right to exist as a Jewish or democratic state; delegitimize, demonize or apply a double standard to Israel; or support the Boycott, Divestment and Sanctions campaign against Israel.

The move by the Swarthmore, Pa., school, located about 30 miles from Philadelphia, helped galvanize several other Hillel chapters to follow suit, including those at Vassar College in Poughkeepsie, N.Y., and Wesleyan University in Middletown, Conn. Open Hillel activists pushed for changes to Hillel’s rules and gathered at Harvard University for a national conference last fall.

“We’ve spent more than a year designing high quality, inclusive Israel-Palestine programming to fully represent and best fit the needs of Swarthmore’s Jewish community,” Sarah Revesz, the president of the student board, said in a statement.

“Hillel International has repeatedly responded with ultimatums and legal threats. This constraining pressure has driven us to a point where we can only continue to serve the diverse needs of our community under a different name than Hillel,” she said. “As we make this transition, we reaffirm our commitment to building a space where all can learn from different viewpoints, and hold fast to the values of openness, inclusivity, and pluralistic dialogue espoused by Hillel the Elder.”

The event at issue, scheduled for next week, is titled “Social Justice Then and Now: Lessons from the Civil Rights Movement.” It’s slated to feature Dorothy Zellner, Larry Rubin, Mark Levy and Ira Grupper — four Jewish veterans of the civil rights movement who are on a national speaking tour sponsored by Open Hillel called “From Mississippi to Jerusalem: In Conversation with Jewish Civil Rights Veterans.” The four also are supportive of BDS tactics. Zellner, for example, penned an article in Jewish Currents in 2012 titled “Why the BDS movement is effective and right.”

Others scheduled to participate in the event are Palestinian activist Ali Abu Awwad, the executive director of Women of the Wall, Lesley Sachs, and the co-founder of Israeli Jewish-Arab education center Yad B’Yad, Lee Gordon.

“If the students or speakers intend for this program to be a discussion in which the speakers present or proselytize their known anti-Israel or Pro BDS agenda,” Hillel International’s vice president and general counsel, Tracy Turoff, wrote Monday to Swarthmore officials, “this would cross the clear line for programs that violate Hillel International’s Standards of Partnership and could be reason for Hillel International to seek to protect its guidelines, name and reputation.”

Hillel International declined to respond to JTA inquiries for comment for this story, but the organization’s president, Eric Fingerhut, has said Hillel is committed to inclusiveness, including of those critical of Israel, but not to giving a platform to those who want to attack Israel.

“Hillel should and will always provide students with an open and pluralistic forum where they can explore issues and opinions related to their Jewish identity,” Fingerhut said last year in a statement. “Hillel will not, however, give a platform to groups or individuals to attack the Jewish people, Jewish values or the Jewish state’s right to exist. This includes groups or individuals that support and advance the BDS movement, which represents a vicious attack on the State of Israel and the Jewish people.”

Swarthmore Hillel’s student board hosted a communitywide discussion Monday on its future within Hillel before holding its own extended debate and then voting. The Jewish campus group’s new name is yet to be determined.

“The only thing we could really think to do to is at least try to continue to work toward having a community where everybody feels like they have a place and to hold to our values of openness and inclusion,” Joshua Wolfsun, the board’s Israel-Palestine programming coordinator, told JTA. “We voted to drop the Hillel name because we didn’t have another choice and we were dealing with lots of restrictions and pressure.

“It was not a unanimous decision,” he added. “Folks expressed a lot of ambivalence.”

There are no real financial ramifications to disassociate with Hillel International, Wolfsun said, citing the student group’s own endowment and the funds it receives from the college.