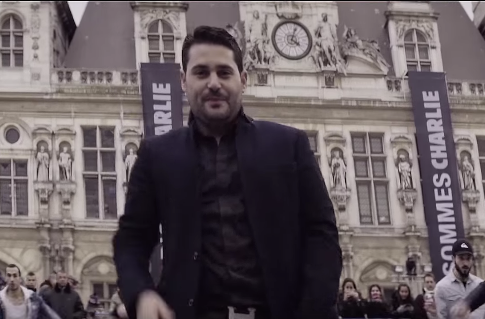 A city where anti-Semitic attacks occur on a daily basis may not seem like the obvious backdrop for an Israeli production of a music video titled Hava Nagila.

Yet Paris’ anti-Semitism problem was precisely why the Rehovot-born religious Jewish singer Gad Elbaz chose to film the video for his newest single  — posted on YouTube earlier this week — on its streets, which still bear French society’s scars from the deadliest string of terrorist attacks it has experienced in decades.

Together with professional dancers and musicians from different faiths, Elbaz sang a techno-flavored version of the Jewish happy number whose title means “Let’s rejoice” in front of the many black banners commemorating the 12 victims of the Jan. 7 shooting at the offices of the Charlie Hebdo satirical magazine.

Part of a string of attacks that ended with 20 dead and dozens wounded, the January killings also felled four Jews who died at kosher supermarket. The attacks prompted millions to march against extremism through Paris on Jan. 11. The black banners titled “I am Charlie” remained on municipal buildings and private residences for weeks after the march.

And while these banners are grim reminders of the deep divisions and dangers threatening France’s republican values, for the producers of Elbaz’s video the background banners provided a subtle way of introducing a political message to a song whose lyrics are purely about fun, feeling free and dancing with friends.

Beginning with a sepia-tinted sequence of a Balkan band playing a lackluster rendition of Hava Nagila in the Marais, France’s historical Jewish quarter, the clip shows Elbaz telling the players: “I have an idea. Let’s groove this thing.”

Jumping between shots of Jewish schoolchildren, African men at Place de la Republique — the point of departure for the Jan. 11 march — the music resumes with percussion, Middle Eastern ululation and house-style trumpet sounds.

The video sequence features professional dancers showing their moves in front of a municipal building bearing two huge “We are Charlie banners,” at a park and a sequence in which Elbaz is leading the Balkan brass band while dancing through the narrow streets of the Marais. In another sequence, the production crew had Parisian passersby sing the Hebrew lyrics.

But the production crew also experienced Paris’ darker side while making the film, which has been viewed 55,000 times since being posted on YouTube on March 16.

“We spent a week in Paris and people there are scared,” producer Daniel Finkelman told the news site collive.com. “I saw with my own eyes as Muslims walked by, pointed their hands like guns at us and called out ‘Jew, Jew!’ in French. It felt like Europe in the 1930s.”

Still,  Finkelman said this only adds urgency to the message that led to the video’s creation in the first place.

“We want the Jewish community of Paris to know: The world cares about you. We are here for you and we are not going to leave you,” he said.