Will the real Netanyahu please stand up? 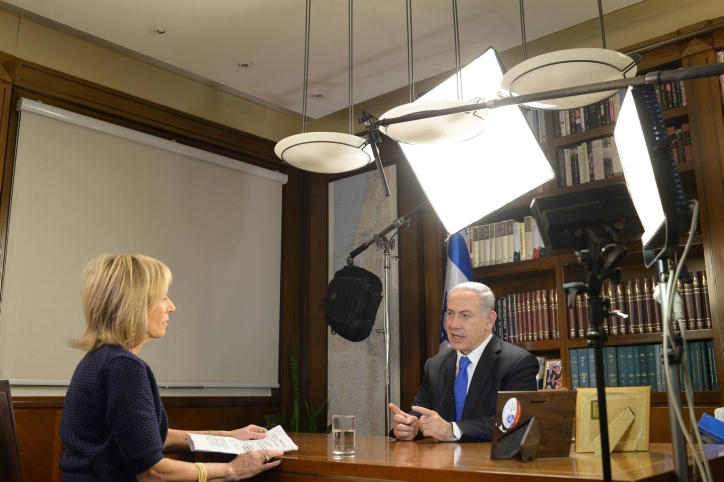 Israeli Prime Minister Benjamin Netanyahu clarified his position on the two-state solution in an interview after his election win with Andrea Mitchell of MSNBC, March 19, 2015. (Amos Ben Gershom/GPO)
Advertisement

(JTA) — There are two Benjamin Netanyahus.

To his detractors, Netanyahu is arrogant, a dissembler and a racist. To his defenders, he is intrepid, politically astute and singularly devoted to Israel’s security.

Netanyahu’s critics blame him for alienating Israel’s closest ally — snubbing the U.S. president, using Congress as a backdrop for electioneering and hurting bipartisan support for Israel. They point to Netanyahu’s statement this week that he opposes Palestinian statehood as proof that he, not the Palestinians, is responsible for the failure to reach a two-state peace deal. And when Netanyahu issued his plea on Election Day that Israeli patriots had better get out to counter the Arab-Israeli vote, they saw it as the ugly epitome of a campaign marked by fear-mongering and racism.

For these detractors — who include many Israelis and American Jews — Netanyahu is a symbol of everything that’s wrong about Israel, and his strong showing on Tuesday is a distressing sign of the direction Israel is taking.

“Benjamin Netanyahu’s victory is a deep disappointment to all who hoped that Israel might choose a new direction for the country in yesterday’s election,” J Street’s executive director, Jeremy Ben-Ami, wrote in an email Wednesday to supporters of the self-described pro-Israel, pro-peace lobbying group.

“The manner in which the Prime Minister secured his victory — shredding the broad bipartisanship that underpins American political support for Israel and preying on fear and racism at home — also demonstrated that he willingly put his own political interests before his concern for Israel’s relationship with the United States and his commitment to Israel’s democratic character.”

RELATED: Will Netanyahu’s campaign rhetoric cause further estrangement with Washington?

To his defenders, Netanyahu is a very different figure, one who makes no apologies for putting Israel’s security ahead of diplomatic expediency, is bold enough to deliver hard truths even when they are unpopular and is clever enough to outmaneuver political rivals — even the president of the United States. Yes, he has his flaws — there’s that penchant for expensive pistachio ice cream — but the vicious attacks against him and his wife, Sara, are little more than political mudslinging.

In this view, Netanyahu’s decision to go ahead with his controversial March 3 speech to Congress had a positive effect: It galvanized opposition to a bad nuclear deal with Iran, as evident in the letter sent by 47 Republican senators to Tehran. Netanyahu may have upset some of Israel’s friends, but the controversy actually served the greater purpose of helping focus attention on the deal’s shortcomings.

When Netanyahu said on Monday that he wouldn’t allow a Palestinian state on his watch, supporters saw it as an honest and sensible assessment of the lessons Israel has drawn from the upheaval that radical Islam has brought to the Arab world.

“I think anyone who is going to establish a Palestinian state and to evacuate territory is giving radical Islam a staging ground against the State of Israel,” Netanyahu told the Israeli website NRG. “This is the reality that has been created here in recent years. Anyone who ignores it has his head in the sand.”

He clarified his position (or backtracked, depending on your view) in an MSNBC interview Thursday, saying he supports “a sustainable, peaceful, two-state solution — but for that, circumstances have to change.”

This view holds currency across the Israeli political spectrum, though left wingers might articulate it differently — perhaps stressing the desire for an eventual two-state solution and trying harder to figure out how to get there. After what happened with Gaza and Lebanon following Israel’s withdrawals, polls show few Israelis believe it’s possible right now to cede West Bank territory without it becoming a staging ground for attacks.

Then there’s the matter of Netanyahu’s 11th-hour appeal to supporters to counter the Arab vote. Some defenders of the prime minister have downplayed it as campaign politics, noting that Netanyahu tried to soften his tone right after his election win, saying he would bring security and social welfare to “all citizens of Israel, Jews and non-Jews alike.”

There’s a lot of room between the polar opposite views of Netanyahu, and many Israelis occupy that space. That’s key to understanding the election results.

Netanyahu wasn’t the overwhelming favorite in Israel. His party captured only one-quarter of all votes. Even the right wing as a whole did not capture the majority of the Knesset (44 seats went to the nationalist parties— Likud, Jewish Home and Yisrael Beiteinu — and another 15 to the haredi Orthodox parties).

But Netanyahu was the beneficiary of several factors. Plenty of Israelis who don’t like him or his leadership style still agree with the fundamentals of his positions on Palestinian statehood, Iran and the threat of radical Islam.

While kitchen table issues are increasingly important for Israeli voters — the two parties focused most intensely on these, Yesh Atid and Kulanu, won a total of 21 Knesset seats — the results overall suggest that ideology and security concerns still remain paramount for most Israelis at the ballot box.

And with the ascendance of radical Islamists in the Arab world, rising anti-Semitism in Europe, deep unease about the emerging nuclear deal with Iran and a growing sense of diplomatic isolation in Israel, the right-wing parties — and Likud in particular — were able to capitalize on Israeli fears.

Whether Netanyahu’s premiership will be seen as having improved Israel’s security or imperiled it may ultimately depend on how history unfolds — and your view of Netanyahu.

What’s clear is that with Israel facing threats on multiple fronts, including myriad domestic challenges and a crisis in relations with the U.S. president, Netanyahu has his work cut out for him.