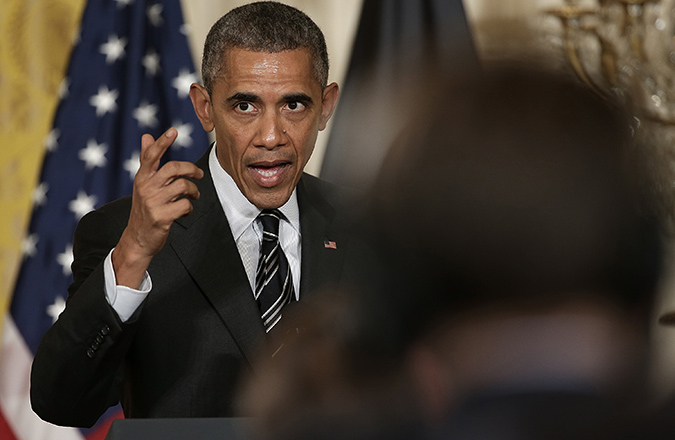 WASHINGTON (JTA) — President Barack Obama would not count out backing U.N. recognition of Palestine as part of his reevaluation of the Israel-Palestinian peace process.

Obama at a news conference on Tuesday said his reevaluation was based on how best to preserve hope for Palestinian statehood.

The president was asked about tensions with Benjamin Netanyahu over the Israeli prime minister’s pledge, before elections last week, not to allow the establishment of a Palestinian state while he is in office.

“The question is, do you create a process and a framework that gives the Palestinians hope, the possibility, that down the road they have a secure state of their own, standing side by side with a secure, fully recognized Jewish state of Israel,” Obama answered. “And I think — it’s not just my estimation — I think it’s hard to envision how that happens based on the prime minister’s statements.”

Obama framed the problem as how to preserve the expectation of two states given Netanyahu’s opposition to the creation of a Palestinian state.

“The issue is not a matter of relations between leaders,” he said. “The issue is a very clear, substantive challenge.

“We believe that two states is the best path forward for Israel’s security, for Palestinian aspirations and for regional stability. That’s our view, and that continues to be our view. And Prime Minister Netanyahu has a different approach. And so this can’t be reduced to a matter of somehow let’s all hold hands and sing ‘Kumbaya.’ This is a matter of figuring out how do we get through a real knotty policy difference that has great consequences for both countries and for the region.”

Obama said he would resume consultations with Israel once Netanyahu has his new government in place. Asked specifically about whether he would back recognition of Palestinian statehood at the United Nations, the president said he would not count it out.

“We’re going to do that evaluation — we’re going to partly wait for an actual Israeli government to form,” he said.

Obama stressed that he was not “reassessing” relations with Israel, as some reporting has characterized the shift.

“When I said that we have to now do an evaluation of where we are, it’s not in reference to our commitment to Israel’s military edge in the region, Israel’s security, our intelligence cooperation, our military cooperation,” he said. “That continues unabated.”