WATCH: What happens when a bunch of Israeli engineering students mark Passover 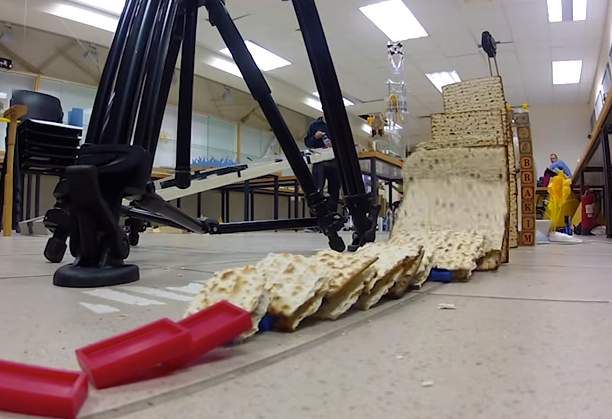 Looking for a Passover video, but pop-song parodies are not your style?

Several mechanical engineering students and two architecture students at Israel’s Technion have taken a novel approach to YouTube holiday commemoration: a Rube Goldberg machine that symbolically depicts the highlights of the Exodus, from Moses setting off in a basket down the Nile to the 10 Plagues to the parting of the Red Sea.

For those unfamiliar with Rube Goldberg, he  was an American Jewish cartoonist best known for his depictions of absurd and ultimately useless mechanical contraptions. A less-known aspect of his biography: in 1929, he was one of several prominent Jews denied membership to an exclusive Westport, Conn., summer colony “long a rendezvous for artists, musicians, authors and poets.”

Fans of the two-minute Technion video can then watch a five-minute “behind the scenes” video showing how it works.

Now if only these guys could construct a Rube Goldberg contraption for the seder table, one that not only tells the Passover story, but cooks and serves the meal!