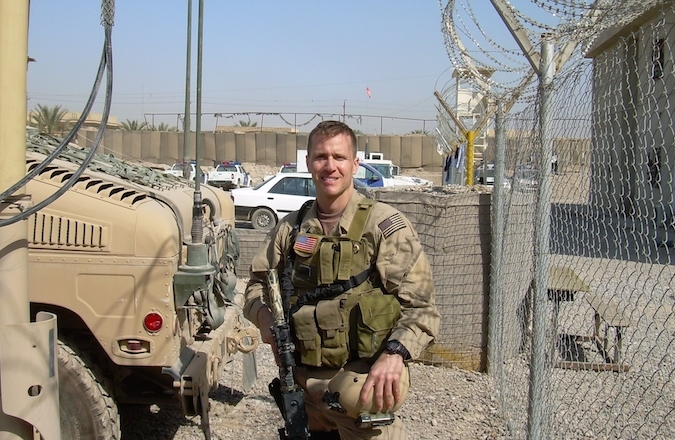 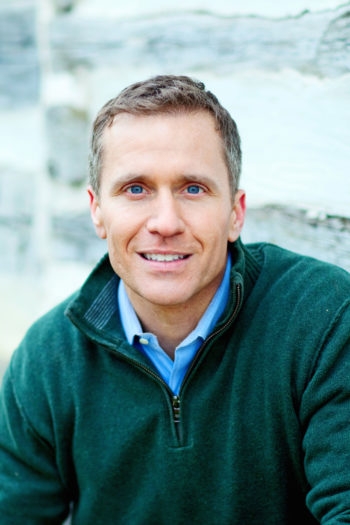 Eric Greitens: “What’s beautiful about the military is that it’s probably the most well integrated institution on the planet.” (Chloe Crespi)

It would be unfair to say that few Jews have résumés as impressive as that of Eric Greitens — because there are few people in the world who have a comparable track record.

Greitens, 40, is a former Navy SEAL, the recipient of seven military awards (including a bronze star and a purple heart), a former Rhodes Scholar and the founder of The Mission Continues, a nonprofit that helps veterans integrate themselves back into their communities through volunteer work. He served in Iraq from 2003 to 2007. His fourth book, “Resilience: Hard-Won Wisdom for Living a Better Life,” published earlier this month, is a collection of inspirational letters to a fellow Navy SEAL struggling with post-traumatic stress disorder.

Greitens, who was raised in the Maryland Heights suburb of St. Louis and attended the city’s B’nai El synagogue, which is Reform, talked to JTA about his Jewish upbringing, his new book and his potential run for governor of Missouri in 2016. The interview has been condensed and edited.

There probably aren’t many Jews in the Navy SEALs. Is that true?

There was one other Jewish Navy SEAL that I knew when I was going through BUD/S, or Basic Underwater Demolition SEAL training. The guy was actually in my class of all things. I actually don’t know the exact statistics, but I suspect that there is Jewish representation in the military consistent with our representation in the American population. Part of the reason I joined the military was because of the Jewish education I received.

What’s beautiful about the military is that it’s probably the most well integrated institution on the planet. You have Jews and Christians and Hindus and Buddhists and Muslims who are all serving the U.S. Army, from every corner of the United States, and they all come together and serve.

You had several positive Jewish role models growing up?

Yeah I did. One guy, my teacher at B’nai El Sunday school, was named Bruce Carl. When I was 16 years old, he asked me to come down to a homeless shelter to do some work. I had done a number of different community service projects before, so I thought “OK fine.” But Bruce said “We’re also going to spend the night.” For a 16-year-old kid from the suburbs of St. Louis, the prospect of spending a night in a homeless shelter in downtown St. Louis was a little bit scary. But Bruce said one, you need to know how all of your neighbors are living and two, it’s important to understand that you can make a difference now in the lives of people around you.

At B’nai El I was also influenced by a number of Holocaust survivors who were brought in to talk with the [religious school] class. So when I was in college, ethnic cleansing was happening in Bosnia. In 1994, I was 20 years old, I went to Bosnia and lived in refugee camps and worked there with unaccompanied children. These were kids who were separated from their parents or whose parents had died during the war. I don’t think I would have been inspired to go to Bosnia without the Jewish education that I received and a number of the teachers I had.

One passage towards the end of your book “Resilience” discusses the importance of the Sabbath and quotes Abraham Joshua Heschel. How does Shabbat fit into your life now?

Just seven months ago my first child Joshua was born, and I think for a lot of people, when you have a child, it makes you think about your Judaism. [My wife] Sheena and I try every weekend to observe the Sabbath. We’re not perfect at it, but we really try. 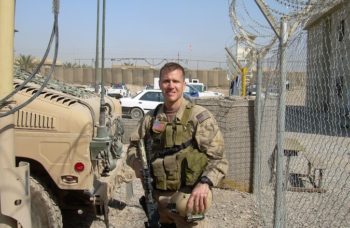 Eric Greitens as a Navy SEAL in Iraq. (Courtesy of Rubenstein Public Relations)

What are some of the other Jewish ideas or values that come up in the book?

One of the people who I quote, Solomon Gabirol, who was a Jewish scholar and poet, said that wisdom and peace lay in being reconciled to the uncontrollable. We now think of the prayer “God grant me the serenity to accept the things I cannot change, courage to change the things I can and wisdom to know the difference.” That idea is right there in this Jewish scholars’ writing. It was his idea.

Another one of the role models I read about when I was in Sunday school was Hannah Senesh. She emigrated from Hungary to Palestine, and these were her words: “One needs something to believe in, something for which you can have whole-hearted enthusiasm.” Now what she did later was volunteer to parachute into a war zone to sneak behind Nazi lines and rescue Hungarian Jews. I write about her in the chapter on happiness, in which I talk about how happiness is very much tied to having a purpose that is worthy.

There’s also a passage I quote from “Gates of Prayer” [the Reform movement’s standard prayer book from 1975 to 2007]. In the chapter about mastering pain, I mention that people who are suffering often turn to prayer. Some people feel weird or guilty because they pray more when things are hard, and they feel ashamed of this. Now I find myself praying more when things are harder, but I also find myself drinking water more when I’m thirsty. I’ve finally begun to understand that praying more when I’m troubled is just as natural. The quotation from “Gates of Prayer” is “Prayer cannot bring water to poached fields or mend a broken bridge or rebuild a ruined city, but prayer can water an arid soul and mend a broken heart and rebuild a weakened will.”

Do you think American society is doing enough to help veterans with PTSD?

Too often the response to people that have post-traumatic stress disorder is to give them drugs. There may be a place for medication in some lives, but what we found at The Mission Continues is that having the right kinds of role models in your life, having the right kinds of mentors and friends, having a sense of purpose, all of those things were the things that veterans actually need to live meaningful lives again.

What’s next for you?

I’ve actually set up an exploratory committee to explore the possibility of running for governor of my home state of Missouri in 2016 [as a Republican]. I’m really excited about it. I think that people are ready for some strong leadership, and I can bring a new approach and some innovative ideas to move our state forward.