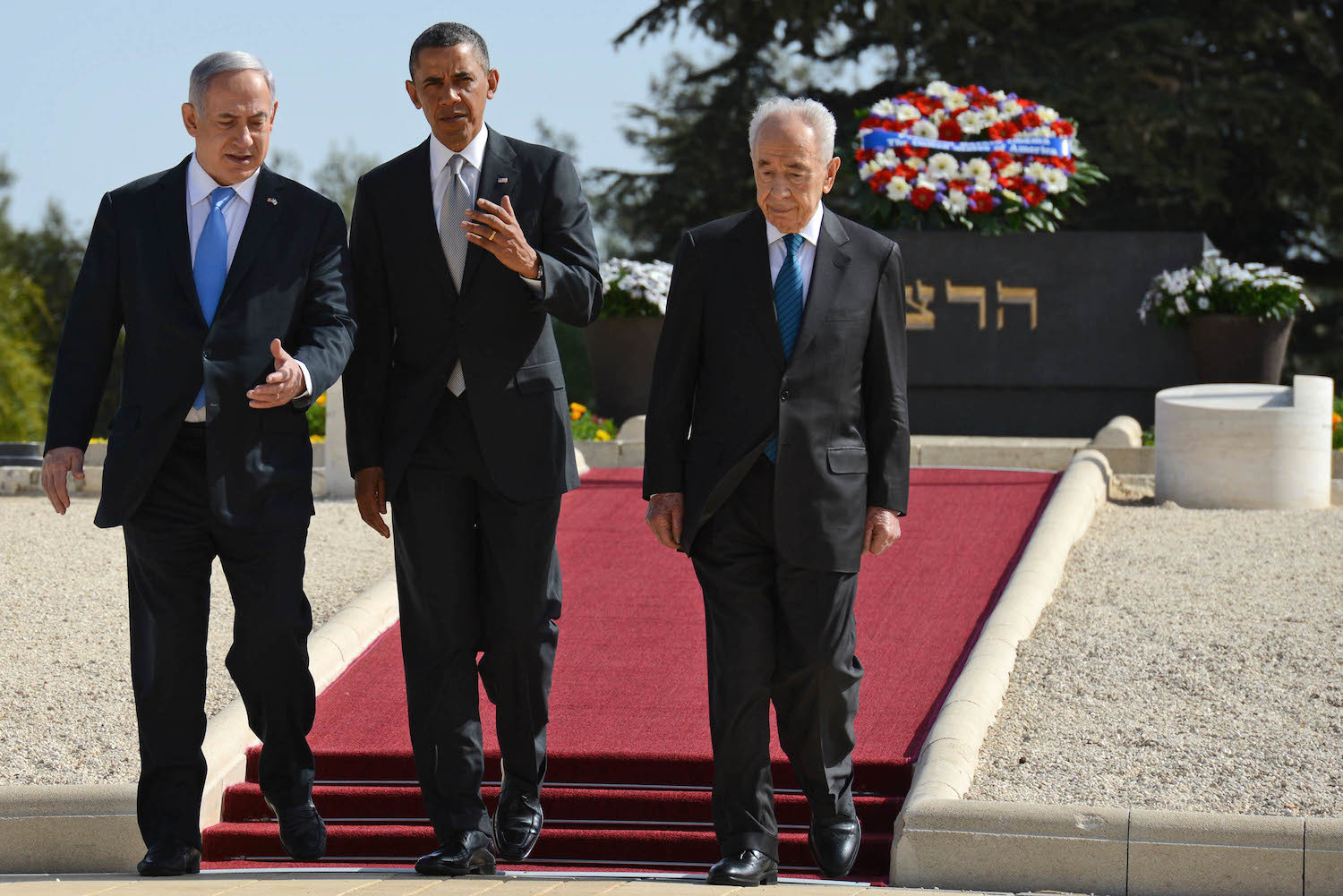 President Barack Obama walks away from the grave of Theodore Herzl next to Israel's Prime Minister Benjamin Netanyahu and President Shimon Peres after Marines layed a wreath on behalf of the U.S. President during a visit to Yad Vashem, March 22, 2013 in Jerusalem. (Kobi Gideon/GPO/Flash90)
Advertisement

TEL AVIV (JTA) — For years, Prime Minister Benjamin Netanyahu of Israel has compared Iran to the biblical Persia, the ancient kingdom where the Jewish people were nearly annihilated through the evil designs of the arch-villain Haman.

But when an American-born rabbi, widely seen as a religious moderate who built one of the most innovative Orthodox synagogues in the United States, compared Obama to Haman in a speech on Saturday night, reaction was swift.

“The president of the United States is lashing out at Israel, just like Haman lashed out at all the Jews,” said Riskin, now the chief rabbi of Efrat, a religious West Bank settlement home to a large number of English-speaking immigrants. “And I’m not making a political statement. That’s OK. I’m trying to make a Jewish statement.”

Riskin reversed himself in an interview Wednesday with JTA, saying that it is Iran – not Obama – that should rightfully be compared to Haman. But his view reflects increasing Israeli mistrust of Obama — particularly as the president struggles to reach an accord concerning Iran’s nuclear program — that occasionally invites comparisons with the ultimate enemies of the Jewish people.

“There is widespread fear and outrage that Obama is allowing Iran to become a nuclear threshold nation,” said Yossi Klein Halevi, a senior fellow at the the Shalom Hartman Institute, a pluralist education center and think tank in Jerusalem. “The extreme statements comparing Obama to historical enemies of the Jews emerge from a widespread sense among Israelis that this president has betrayed us.”

Harsh criticism of Obama among Israel’s settler community is hardly new, nor is the evocation of Haman in commentary about the American president.

In 2009, Shlomo Aviner, a leader of the religious Zionist community and the rabbi of the West Bank settlement of Beit El, invoked the Purim story in criticizing Obama’s opposition to Israeli settlement expansion. Israel should act like Mordechai, who “would not bow down and prostrate himself” to Haman, Aviner said.

In 2012, Israel’s Army Radio reported that Dov Lior, the chief rabbi of the West Bank settlement of Kiryat Arba, had also compared Obama to Haman.

As an accord with Iran has grown more likely — despite fervent Israeli objections — criticism of Obama has spread even to leaders of the Israeli peace movement. In March, David Grossman, an influential author and prominent critic of Netanyahu, defended the prime minister’s opposition to the Iran deal, calling Obama “clumsy” and “naive” in his handling of negotiations.

“It demonstrates an even criminal naivete in groping to understand the complexities of the Middle East,” Grossman told the Italian newspaper La Repubblica.

Riskin’s remarks on Saturday added a biblical dimension to the critique of Obama. But though Riskin made the comments to a religious crowd, allusions to foundational Jewish stories resonate with secular Israelis as well.

“In Israel, comparisons to people in the Bible, biblical heroes and biblical characters is something general,” said Ilan Geal-Dor, executive director of Gesher, a religious-secular cooperation organization. “It’s not specifically religious.”

The Israeli public has not always viewed Obama unfavorably. The 2013 Pew study, published two months after Obama’s visit to Israel, found that 82 percent of Israelis believed American policy in the Middle East was either fair or favored Israel. Nearly half wanted Obama to play a larger role in resolving the Israeli-Palestinian conflict. Obama’s handling of the Iran situation, Halevi says, has caused the president’s standing to plummet.

“There is no real debate here about whether Obama can be trusted,” he said. “It’s not true that Israelis were hostile to Obama from the beginning. The closer we get to a deal, the more he’s losing us.”