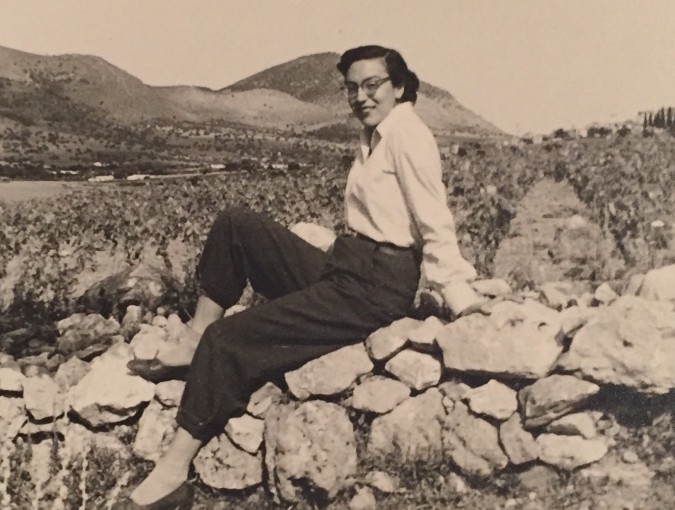 Sarah Haim, shown while living in Israel from 1947 to 1956, died in Los Angeles in 2009. (Courtesy of Harry Zinn)
Advertisement

TEL AVIV (JTA) – A few blocks from Sylvia Selvas’ home here near the Mediterranean Sea is the apartment where she last saw her friend Sarah Haim.

That was 59 years ago, when Haim stopped by to tell Selvas that she was moving to the United States. Selvas recently welcomed a visitor to her second-floor residence on Yirmiyahu Street in the hope of finding her friend.

Two weeks after the interview, “Seeking Kin” learned that Haim had died at 81 in 2009 after suffering from Alzheimer’s disease. But now Haim’s son, previously unaware of the friendship, said he looks forward to speaking with Selvas.

Selvas and Haim, both Greek Jews, met as teenagers in the late summer of 1946 at a detention camp in Cyprus. British Mandatory authorities had turned back the Henrietta Szold, a boat on which they and other Holocaust survivors had sailed from Sounion, Greece, toward prestate Israel.

Selvas, a Salonika native whose maiden name was Tabokh, recalled that the British transferred them in February 1947 from Cyprus to Atlit, near Haifa, where they were detained for three more months before being released to the Jewish Agency’s care in Kiryat Haim.

Sylvia Selvas, displaying a photo of her late husband and their four grandchildren, had hoped to locate her long-lost friend from their native Greece. (Hillel Kuttler)

Haim settled at Kibbutz HaGoshrim, in the Upper Galilee. Selvas was picked up by relatives living in Tel Aviv, settled in the city and in 1949 met and married Yom Tov, a cobbler who also hailed from Greece. About then, the kibbutz sent Haim to Tel Aviv for a course on becoming a child-care provider. During the months-long program, she stayed two nights a week with the Selvases at 302 HaYarkon St., sleeping on their pullout sofa and returning to HaGoshrim the next day.

In July 1956, shortly after Selvas gave birth to her daughter Aviva – her first child was Moshe – Haim visited for the last time. She brought a baby gift and some big news: She was moving to Los Angeles. Haim’s sister and mother, living in Athens, would join her there.

Selvas received a letter from Haim after the move, even saving the envelope showing the address. But the letter and envelope have gone missing just when Selvas, 86, wanted to find her old friend. Selvas lacks even a photograph of Haim.

“Who had cameras then?” she said, citing Israel’s austerity period. “We were poor and worked just to live.”

Times were tough for the new immigrants in California, too, Selvas remembers Haim writing in Greek. Selvas responded, but didn’t hear back – probably because she had moved to the apartment in which she still resides.

The Haim she knew possessed “much courage, education and manners.” They had a “good friendship,” Selvas said, and sometimes cried together about their common survival in hiding and becoming fatherless.

A break in finding Haim occurred when a listener to the Israeli radio program “Hamador L’Chipus Krovim” (Searching for Relatives Bureau) identified two women with her name who had died in recent years in the United States. The show’s host, Izi Mann, alerted “Seeking Kin,” whose search uncovered several obituaries leading to Harry Zinn, a Los Angeles lawyer. He confirmed that his late mother was the missing woman.

She was born in Kavala, near Salonika, he said, but her family hid in Athens during the German occupation: Laura, the youngest of three girls, in an orphanage; Haim and her mother, Henriette, with a Christian family; and the eldest daughter, Allegra, elsewhere with their father, Solomon, the owner of a successful textile company.

Solomon died of tuberculosis, and Henriette “went to great lengths, and at great risk, to have him buried in a Jewish cemetery,” Zinn said. Allegra was captured during a roundup and deported to Auschwitz, where she died in the hospital two weeks after the concentration camp was liberated. Henriette and Laura remained in Athens postwar, but Haim preferred Israel.

“She was the Zionist and felt there was a need for a place for Jews to be safe,” he said. Haim spoke little to her two children – like Selvas, she had a son and then a daughter – about the Holocaust or her Israel years.

“The little I pieced together was she was happy in HaGoshrim,” Zinn said. But when Henriette and Laura decided to join a cousin who had moved to Los Angeles, Haim decided, “reluctantly, to join her mother and sister in America” rather than be farther away in Israel, he said.

On a 1984 visit to Israel, the Zinns visited HaGoshrim, where Haim caught up with several residents she had known decades before. She apparently didn’t visit Selvas; Zinn hadn’t known of their friendship, although he said that Laura, now 84, knew.

After their parents’ death three months apart in 2009, Zinn and his sister – Helene Allegra Zinn’s middle name memorializes her aunt – established a Holocaust studies scholarship at UCLA in their honor.

Zinn said that when he speaks with Selvas, it might be in Ladino, which he learned when Henriette lived with the Zinns.

“It’s a remarkable window that’s opened into the past that how can you not want to look through,” he said of Selvas’ search for his mother. “It’s a really emotional thing to find this connection and this information. It feels like finding some buried treasure you weren’t even looking for.”

Listen to more about this story here and continuing here.