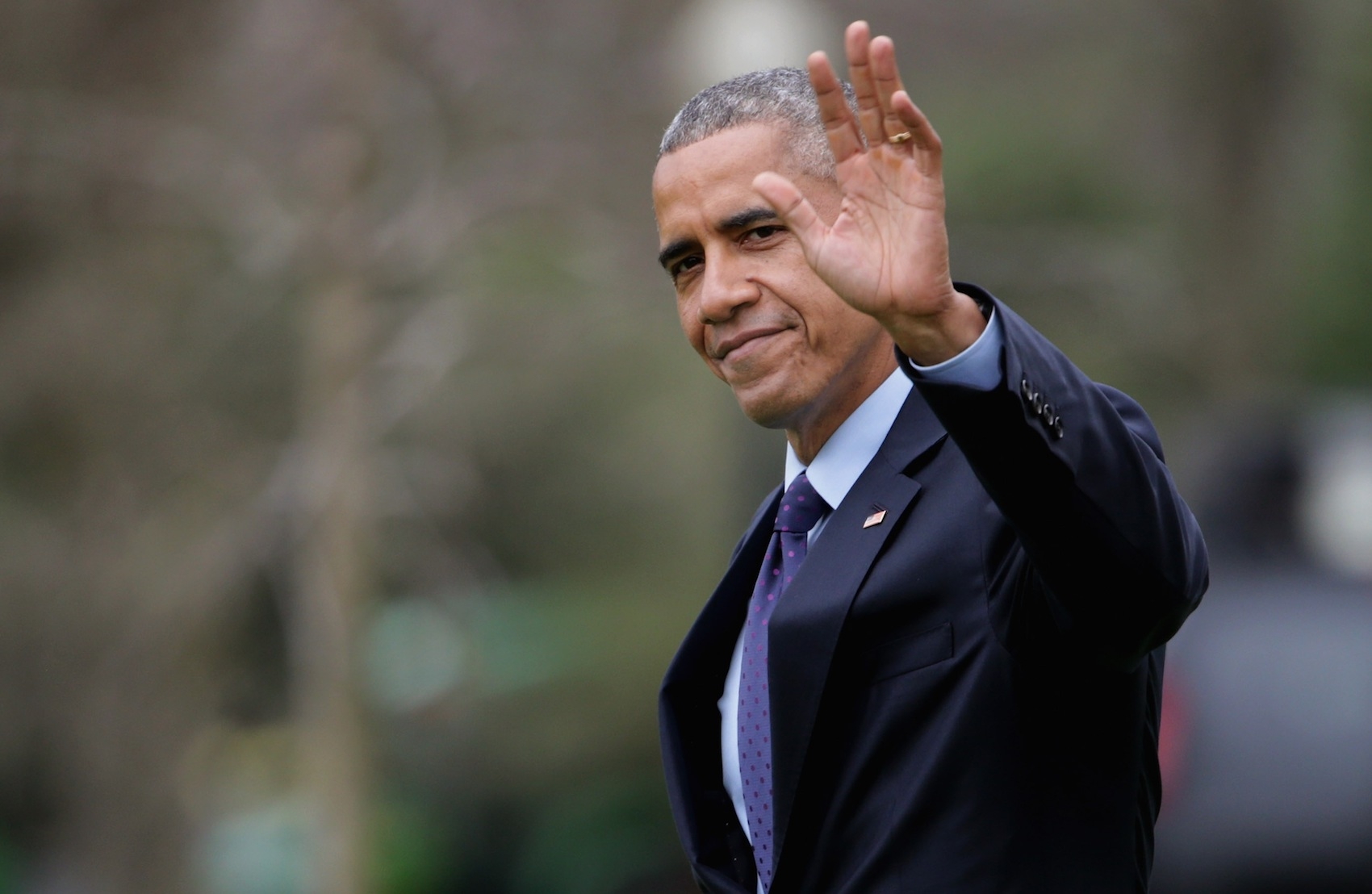 President Obama has said Iran should be granted sanctions belief only once it begins to implement a nuclear accord. (Chip Somodevilla/Getty Images)
Advertisement

WASHINGTON (JTA) – Now that the outline for an Iran nuclear agreement has been released — or, more precisely, two outlines, one by Iran, the other by the Obama administration — major gaps have emerged that will need to be resolved ahead of a June 30 deadline for a final deal, including when sanctions on Iran are lifted.

President Barack Obama and Iran’s supreme leader, Ali Khamenei, issued conflicting statements in the past week on the sanctions issue, with Obama suggesting sanctions would be relaxed only once Iran begins to implement its obligations and Khamenei demanding that all sanctions be suspended upon signing an agreement. Khamenei also vowed that military sites would not be open to nuclear inspectors, which clashes with the American text, which says inspectors have the right to visit suspicious sites “anywhere in the country.”

The next round of talks is likely to be held within three weeks in New York City, on the sidelines of a meeting of the United Nations Disarmament Commission, and both Obama and Khamenei have said that nothing is agreed until everything is agreed.

In the coming weeks, both sides will endeavor to sell the deal to its various constituencies: Iran to its domestic hardliners, and the Obama administration to Congress, Jewish groups and skeptical allies, Israel chief among them.

What the Obama administration wants to see

In its outline of a framework accord reached earlier this month in Switzerland, and in subsequent statements and interviews, the Obama administration has focused preeminently on the strict limits it is seeking on Iran’s capacity to enrich uranium.

These include limiting Iran’s advanced centrifuges to scientific research and reducing the number of active first-generation centrifuges, from 19,000 to 5,060, for 10 years. Enrichment would be limited to 3.67 percent, the level required for medical research and well short of weaponization levels. Iran’s stockpile of enriched uranium would be limited to 300 kilograms for 15 years. The deal would also provide for a regimen of intrusive inspections at all Iranian facilities.

“You have assurances that their stockpile of highly enriched uranium remains in a place where they cannot create a nuclear weapon,” Obama told National Public Radio last week.

According to the administration’s outline, sanctions relief is conditioned on Iran abiding by its commitments. The sanctions architecture will remain in place so they can be quickly reimposed if Iran defaults.

Additionally, Obama administration officials have emphasized that Iran’s breakout time will be extended from the current two to three months to a year, although how this will be quantified is not yet clear.

What Iran wants to see

In contrast with the phased relief outlined in the U.S. document, a “fact sheet” published by the Iranian Foreign Ministry posits an immediate lifting of sanctions after a deal is reached. On Thursday, in a speech broadcast live on Iranian television, Khamenei said there would be no point to the negotiations if they did not yield immediate sanctions relief.

“All sanctions should be removed when the deal is signed,” Reuters quoted Khamenei as saying. “If the sanctions removal depends on other processes, then why did we start the negotiations?”

“Hours after the #talks, Americans offered a fact sheet that most of it was contrary to what was agreed,” said a tweet posted on his feed Thursday. “They always deceive and breach promises.”

On the enrichment question, the Iranian and American outlines are not mutually exclusive.

“None of the nuclear facilities or related activities will be stopped, shut down, or suspended, and Iran’s nuclear activities in all of its facilities including Natanz, Fordow, Isfahan, and Arak will continue,” said the Iranian document, which goes on to name only Natanz as a site for 3.67 percent uranium enrichment, which comports with the U.S. document. The other sites are deemed acceptable for scientific research in the American version, a status that conceivably comports with “related activities” in the Iranian document.

What Israel wants to see

Prime Minister Benjamin Netanyahu of Israel said in the immediate wake of the agreement that the framework deal would threaten Israel’s survival. He counseled “standing firm and increasing the pressure on Iran until a better deal is achieved.”

Netanyahu did not provide details, but in interviews he has said that Israel could tolerate a deal that left “hundreds” of centrifuges in place, as opposed to the 5,060 the U.S. outline anticipates — itself a significant concession for Netanyahu, who had previously said that Israel would tolerate no more than a zero capacity for uranium enrichment.

Yuval Steinitz, Israel’s minister of intelligence, also provided more details of Israel’s desires for a final deal in a briefing for reporters in Jerusalem, demanding a complete end to research and development of advanced centrifuges, the shuttering of the underground Fordo facility, and freedom for inspectors to go “anytime, anywhere.”

In an Op-Ed published April 8 in the Washington Post, Moshe Yaalon, the Israeli defense minister, called for dismantling much of Iran’s nuclear infrastructure.

“Intelligence and inspections are simply no substitute for dismantling the parts of Iran’s program that can be used to produce atomic bombs,” Yaalon wrote.

Israel also has an eye on Iran’s destabilizing activities elsewhere in the region. The Obama administration and its five negotiating partners – China, Russia, France, Germany and Great Britain – see the nuclear deal as discrete from other Iranian actions.

“Restrictions imposed on the Islamic Republic’s nuclear program will expire in about a decade, regardless of Iran’s campaign of murderous aggression in Lebanon, Syria, Yemen and elsewhere across the Middle East; its arming, funding, training and dispatching of terrorists around the world; and its threats and violent efforts to destroy Israel, the region’s only democracy,” Yaalon wrote.

Netanyahu recently also demanded Iran’s recognition of Israel as a component of a final deal, a requirement that Obama has said is unrealistic.

What Congress wants to see

Two bills under consideration in Congress, both backed by the American Israel Public Affairs Committee, could affect the outcome of an Iran deal.

One sponsored by Sens. Mark Kirk (R-Ill.) and Robert Menendez (D-N.J.), would mandate new sanctions should Iran default on a deal or walk away from the talks. Obama has said such a bill would scuttle the talks and has pledged to veto it. The bill was approved in January by the Senate Banking Committee. Now its fate is in the hands of Sen. Mitch McConnell (R-Ky.), the majority leader, who must decide whether it advances to the full body.

McConnell has not shown his hand, but he is unlikely to move it forward unless he can build a veto-proof majority of 67, which would require the support of 13 Democrats. With Menendez sidelined as he faces indictment on corruption charges, that is unlikely.

The other bill, backed by Sen. Bob Corker (R-Tenn.), the chairman of the Foreign Relations Committee, would require congressional review of an Iran deal. That bill stands a better chance of passage.

Sen. Charles Schumer (D-N.Y.), who is in line to become his party’s Senate leader in the next Congress, backs the bill as it is. Other Democrats, including key Obama allies like Sen. Ben Cardin (D-Md.), Menendez’s replacement as the top Democrat on the Foreign Relations Committee, and Sen. Tim Kaine (D-Va.), the top Democrat on its Middle East subcommittee, say they would back the bill if Corker removes non-nuclear related elements, among them requirements that Iran cease backing for terrorism.

The Corker bill comes up for review by the Foreign Relations Committee on Tuesday, and Cardin said he hoped to shape it to make it a “process” bill and not one that prescribes the terms of an agreement.

“One of my concerns is that the bill carries out its mission — a way for Congress to review and take action,” Cardin told JTA.

Obama, who had previously said he would veto the Corker bill, indicated this week that he could work with a modified version.