Obama, in meetings with Jewish leaders and donors, stresses how much he cares 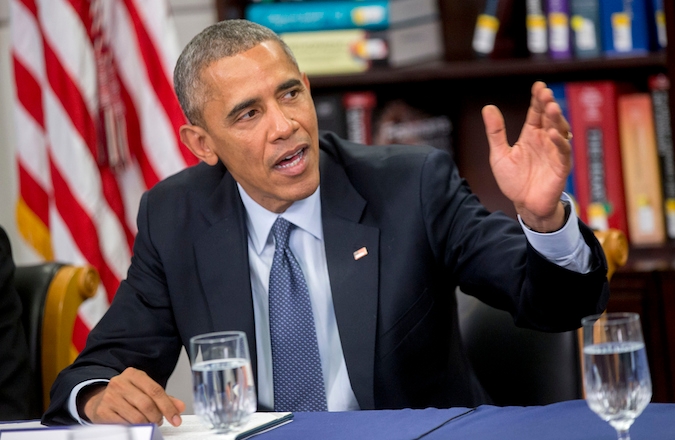 In a meeting with multiple Jewish leaders, President Barack Obama expressed concern over how he is perceived in the Jewish community. (Andrew Harrer-Pool/Getty Images)
Advertisement

WASHINGTON (JTA) – Jewish leaders expected President Barack Obama to sell them hard on the Iran nuclear deal. Instead, participants in two White House meetings on Monday said he offered a softer pitch on how deeply he cares for Israel and the Jewish people.

“He tried to explain he understands Jewish trauma, history, the Jewish feeling of being alone in a bad neighborhood,” said a participant in the first meeting, which was attended by 15 top officials from Jewish organizations.

Another described the meeting as “intense.”

“There was an openheartedness, there were some deep reflections by the president,” this participant said.

Sources said the second meeting, for Jewish fundraisers for the Democratic Party, had a similar cast.

“He said, ‘I consider it a moral failure if something happened to Israel on my watch,’” a participant in the fundraisers’ meeting said. “He said, ‘I feel like I’m a member of the tribe.’”

JTA spoke to six participants in the meetings, both of which were off the record. None agreed to be identified because of ground rules set by the White House. Additionally, representatives of a number of groups gave JTA descriptions of the meetings. The accounts did not differ.

All six participants used “therapeutic” to describe the tone of the meetings.

Obama’s tone – at times anguished, according to participants – signals his concerns about how his presidency, heading into lame duck territory, is perceived in terms of his relationship to Israel and to Jews.

He raised these concerns in an interview with The New York Times columnist Thomas Friedman posted April 5 on the newspaper’s website.

“It has been personally difficult for me to hear the sort of expressions that somehow we don’t have, this administration has not done everything it could to look out for Israel’s interest,” Obama told Friedman. “And the suggestion that when we have very serious policy differences, that that’s not in the context of a deep and abiding friendship and concern and understanding of the threats that the Jewish people have faced historically and continue to face.”

The worries come in the wake of a crisis in U.S.-Israel relations, focused mostly on disagreements over the Iran nuclear talks, but also fueled by lingering resentments over the collapse last year of the U.S.-brokered Israeli-Palestinian peace talks and the difficulties that Obama and Israeli Prime Minister Benjamin Netanyahu have in communicating with one another.

Earlier this month, the major powers and Iran announced the outline of a deal that would exchange sanctions relief for restrictions aimed at keeping Iran from acquiring a nuclear weapon. Congress was considering legislation that would require its review of any deal, and Obama had said he would veto it.

Last week, Secretary of State John Kerry held a meeting with Jewish leaders from the same organizations attending the White House meeting asking them not to lobby in favor of the legislation.

However, Democrats and Republicans in the Senate by Monday afternoon were close to a compromise on the legislation that would address White House concerns, and Obama told the second meeting with Jewish leaders that his concerns about the bill were allayed.

It’s not clear what the compromises were, but Democrats were seeking to remove from the bill determinations for the contents of a final deal, which is due by June 30, and instead confine the bill to mandating congressional review of any deal. Sen. Bob Corker (R-Tenn.), the chairman of the Senate Foreign Relations Committee, told MSNBC on Tuesday morning that a deal had been reached and that the bill was ready for a committee vote to take place that afternoon.

A number of the more conservative organizational leaders attending the first meeting, among them Rabbi Marvin Hier, the dean of the Simon Wiesenthal Center, and Allen Fagin, the Orthodox Union’s CEO, challenged Obama on the particulars of the Iran deal, including concerns that the sanctions relief went further than merited by the restrictions on Iran’s nuclear activity.

Hier told JTA that he raised annihilationist anti-Israel comments by Iranian leaders coincident with the talks – and with the 70th anniversary of the defeat of Nazi Germany, as well as the threat posed to Israel by Hamas, the terrorist group controlling Gaza.

“What meaning do these negotiations have when were not confronting remarks by Ayatollah Khamenei?” Hier asked, referring to Iran’s supreme leader, Ayatollah Ali Khamenei.

The meeting with the fundraisers became more of a strategy session on how Obama could better his messaging to Jewish-Americans, Israelis and the wider American community. Advice included being more communicative with Congress, which has regarded the White House as insulated, and engaging directly with the Israeli public, which is still reeling over the bitter exchanges prior to Netanyahu’s speech to Congress in March. The address was arranged without consulting the White House.

Along with Obama, National Security Adviser Susan Rice attended the first meeting. The second meeting included Vice President Joe Biden, who for decades has been close to the pro-Israel community, and Valerie Jarrett, one of Obama’s closest advisers.

The second meeting, with 14 invitees, included major Democratic givers and fundraisers, including Haim Saban, the Israeli-American entertainment mogul who has been critical of Obama’s Middle East policies; and Democratic donors associated with AIPAC, including past presidents Amy Friedkin and Howard Friedman, and with J Street, including Alexandra Stanton, Lou Susman and Victor Kovner.

Not all of the Jewish leaders at the first meeting were won over by the president’s appeal for understanding.