In L.A.’s Koreatown, Wilshire Boulevard Temple bets big on the past for its future 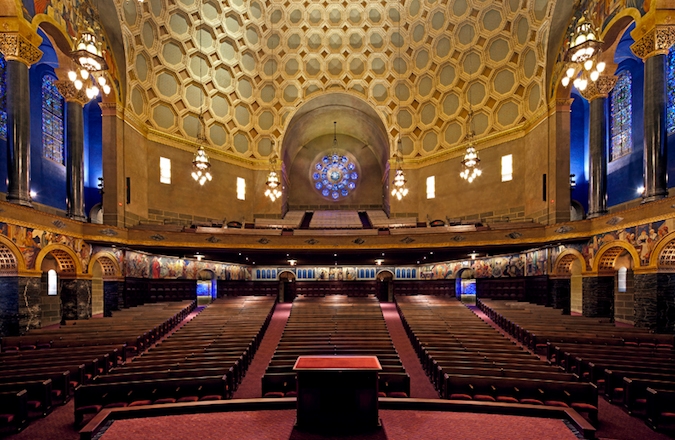 Wilshire Boulevard is undergoing an expansion project that will have taken more than a decade to build and cost nearly $200 million. (Tom Bonner)
Advertisement

LOS ANGELES (JTA) — The time has long since passed when Wilshire Boulevard Temple’s address on its namesake boulevard was considered glamorous.

Now the surrounding blocks are the clamorous heart of Koreatown, with all its urban grit: traffic snarls, hulking office buildings, electronics shops, dentists, and banks with signs in Korean and some in Spanish. Here Wilshire Boulevard Temple — the grand Byzantine-revival synagogue built in 1929 — seems like a relic of another era, before this city’s prospering Jewish community moved west and north, leaving the neighborhood to subsequent waves of immigrants.

But these days, the temple complex is alive with its own dust and clamor. Construction workers are toiling to put up new buildings and renovate old ones, part of a multi-year capital project that has restored the polish to the once-neglected sanctuary building. The religious school is full, and a new elementary day school is growing with each school year.

When all is said and done, the Reform congregation’s expansion project will have taken more than a decade to build and cost nearly $200 million. The Glazer Campus, as it is called now, will fill an entire city block.

If successful, the project will be not only a stunning rebirth for a complex that once seemed at risk of moldering into obscurity, but a large and expensive commitment to Jewish presence in the type of diverse urban neighborhood that the American Jewish community once seemed on the verge of abandoning.

“This is really an urban synagogue that has decided to commit to the urban core of a city,” said Rabbi Susan Goldberg, one of Wilshire Boulevard Temple’s eight rabbis.”It’s a different way of seeing our strong Jewish identity as one identity in this multicultural community of L.A.” 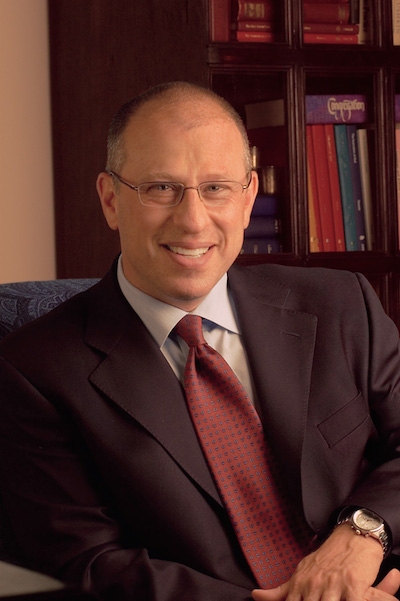 That commitment to the urban core was, at one point, in serious doubt. When Steven Leder took over as senior rabbi in 2003, the temple was large and prosperous, with not only the original temple complex but a gleaming new full-block campus 10 miles away in wealthier west Los Angeles, a pair of camps and a conference center in the Malibu hills. The membership was more than 2,000 families.

However, there were festering problems at its original home. The synagogue building was deteriorating from years of neglect, and the size of the kindergarten class at the accompanying east side religious school was zero. Synagogue leaders debated whether it was time to sell the building.

But Leder had fallen in love with the sanctuary from the first moment he walked into it in 1987, when he first interviewed to work at Wilshire Boulevard Temple. He had no intention of selling.

“I said to the board, we have to make this decision, but if you guys really think it’s best to sell it and become an exclusively west L.A. congregation, you should look for another senior rabbi,” he told JTA. “I’m not going to be the one who turns that place into a church.”

Besides, Leder saw signs of opportunity. He had noticed, and a demographic study for the temple confirmed, that younger Jewish families had again started moving to the east side. The key was to attract them, and that meant more than simply restoring the old synagogue — the result, he believed, would be a beautiful but empty building.

Working with the firm of architect Brenda Levin starting in 2005, the congregation developed the ambitious master plan for the campus — a restored synagogue, a new Jewish early childhood center, a new Jewish elementary school, a social service center, an athletic field, a community gathering space and more.

It was a plan that would require the synagogue to buy up the rest of its city block and embark on a massive fundraising campaign, sustained through the Great Recession that has raised $126 million toward an apparently unprecedented total estimated at $180 million to $190 million.

“There’s nothing comparable in my experience,” said David Mersky, a fundraising consultant who has worked with a number of synagogues on fundraising campaigns and consulted briefly with Wilshire Boulevard Temple. The closest reference he could recall was a $30 million drive by Central Synagogue, a congregation on the East Side of Manhattan, for a 2001 restoration.

(Lincoln Square Synagogue on Manhattan’s Upper West Side spent some $50 million on its new building, which opened in 2013. Funds for that congregation included proceeds from a land swap, and a fundraising push that included an anonymous $20 million donation.)

Large and expensive projects are nothing new to Wilshire Boulevard Temple. When the 1929 building was constructed, the synagogue was known as the “Temple to the Stars,” and its list of contributors to the building fund in the lobby includes Hollywood studio honchos such as Jack Warner, B.P. Schulberg and Louis B. Mayer.

These days, the membership leans more toward professions such as real estate, law and finance, sources close to the congregation said, although it is still home to members such as former Disney board member Stanley Gold and “Pulp Fiction” producer Lawrence Bender.

But as in the past, the synagogue’s members have opened their deep pockets. Erika Glazer, the daughter of shopping mall developer Guilford Glazer, donated $30 million to the restoration and expansion, as well as another $6 million for a new early childhood center. An anonymous donor gave $10 million, and a total of 30 donors have made gifts of $1 million or more. 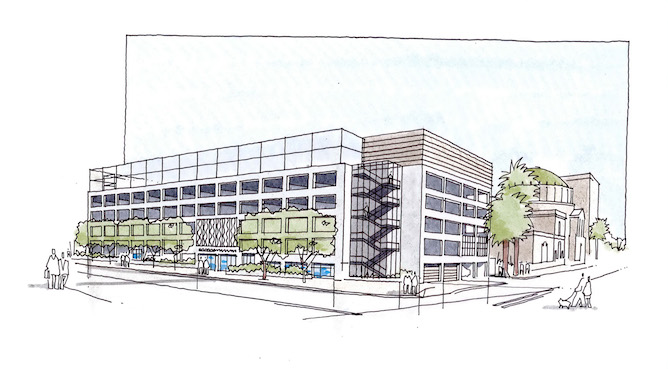 The temple is in the midst of building a four-story garage that will house parking for 450 cars and a full-sized playing field on the roof. On the ground floor will be the new Karsh Family Social Service Center.

The parking garage, field and school buildings are expected to open in September, and the social service center early next year. Plans are still being developed for the final construction phase, a five-story building that will likely include a banquet hall, cafe, offices and only the second non-Orthodox mikvah in Los Angeles.

The germ of the idea for the social service center came from a desire to build a new space for the temple’s 28-year-old food pantry, which lacks proper cold storage and dedicated distribution space. But the idea quickly expanded as the temple sought to join with existing organizations in the community to create a walk-in center that could serve as a one-stop shop for a variety of social service needs.

The synagogue is planning to partner with the Korean Health, Education, Information, and Research Center, which runs a nearby health clinic, to open a dental and vision clinic — medical services that are not provided by emergency rooms and thus are in intense demand among poorer residents. An array of nonprofit legal centers, including Bet Tzedek and Asian Americans Advancing Justice, will offer low-cost or pro bono legal services on issues ranging from elder care to citizenship. And over time, the temple hopes to add additional services ranging from grief counseling to resume mentoring.

“If we are nothing more than a landlord that charges no rent, we are a failure,” said Rabbi Beau Shapiro, who is overseeing the planning for the social service center.

On that front, the early signs are positive. A January workshop for citizenship applications held at the temple was so popular that it attracted more volunteers than the number of clients the organization had brought for the occasion. One of the volunteer lawyers was so moved by the applicant he was helping that when he discovered that she didn’t qualify for a fee waiver for her citizenship application, he arranged for his law firm to cover the cost.

“We were like, ‘Oh my God, we hit the jackpot here,’” said Nasim Khansari, the citizenship project director for Asian Americans Advancing Justice, who ran the workshop.

Johng Ho Song, the executive director of the nearby Koreatown Youth and Community Center, said he has been impressed with the temple’s outreach to community groups like his own and expressed hope that the temple’s collaborative vision could become a model for institutions in other neighborhoods as well.

“They’re making a very conscious decision to work together and share their resources, which is very unusual here,” Song told JTA. “I think they’re really trying to demonstrate that they like to be involved with the community, they want to be part of community, and they want to make a positive impact.”

That, in turn, could help nurture a closer relationship between the temple members and the surrounding community.

“It builds partnership, it builds trust in the community,” Song said. “It’s an opportunity to break down some of the differences and cultural stereotypes.”

At the same time, Rabbi Goldberg, assigned full-time to the eastern campus, has been tasked with reaching out to the east side’s burgeoning Jewish community. It’s a task that ranges from teaming with organizations such as East Side Jews to create events from living room Havdalahs to monthly Friday night services where everyone sits on the grand sanctuary’s bimah to make the space feel more intimate.

So far, the signs for the new campus are positive – synagogue membership has been stable at around 2,400 members, and Leder notes that the age of membership is trending younger, as new families joining replace older congregants who have died. The schools are at capacity with waiting lists.

If Wilshire Boulevard Temple’s very expensive bet does pay off in the long run, it will be because what were once thought to be its greatest vulnerabilities – the massive old sanctuary and the diverse, teeming neighborhood around it – prove to be unique strengths.

Leder argues that the synagogue and the social service center, on opposite sides of the block, represent the two portals into Judaism – worship and engagement with the problems of the world.

“All we have to do is open our doors,” he said.