FBI director: Holocaust museum program a must for new agents 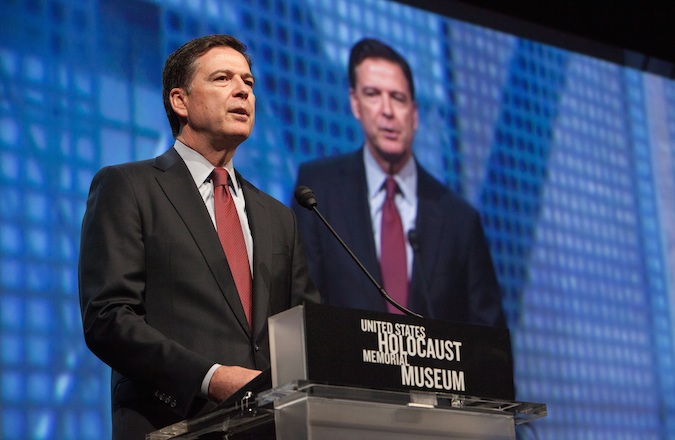 WASHINGTON (JTA) — FBI director James Comey called the Holocaust the most significant event in history and said that’s why a U.S. Holocaust Memorial Museum program on its lessons is mandatory for new agents.

Speaking Wednesday at the museum’s National Tribute dinner in Washington, Comey made a point of noting that new special agents and intelligence analysts must attend the Law Enforcement and Society: Lessons of the Holocaust program.

He added, “Good people helped to murder millions. And that’s the most frightening lesson of all. That is why I send our agents and our analysts to the museum. I want them to stare at us and realize our capacity for rationalization and moral surrender.”

The FBI has participated in the program since 2009. The program, which was developed in conjunction with the Anti-Defamation League, was launched in 1998.

Prior to Comey’s remarks, the 2015 Elie Wiesel Award was presented to Benjamin Ferencz and Thomas Buergenthal.

Ferencz is the last surviving prosecutor of the war crimes trials at Nuremberg. Ferencz was 27 years old when he won convictions against 22 Einsatzgruppen, a particularly ruthless faction of German SS, who were charged with the murders of 1 million people. After the war, Ferencz helped lay the groundwork for the International Criminal Court.

“Never again has been happening ever again,” Ferencz said in a pretaped message. “We need laws and courts and enforcement. And the enforcement arm is very weak, so the public is the court of last resort. I turn the world now back to you and hope you’ll have a more peaceful world than I have seen. Good luck.”

Buergenthal, one of the youngest survivors of Auschwitz, served for 10 years as a judge to the International Court of Justice at The Hague, Netherlands. In his remarks, he drew parallels between himself and his friend, and the award’s namesake, Wiesel, a Nobel peace laureate and renowned Holocaust memoirist. He also paid homage to the more than 1 million children murdered in the Holocaust.

“Think of the scientists, medical doctors, scholars, artists, musicians, poets, writers, astronomers, teachers and philosophers these children might have become had they been allowed to live,” he said. “We will never know how many future Nobel Prize winners were among the children who perished.”

Among those on hand for the dinner were Abraham Foxman, the Anti-Defamation League’s national director; Rep. Debbie Wasserman Schultz, the chair of the Democratic National Committee; Ron Dermer, Israel’s ambassador to the U.S.; and Mohammed Dajani, the former Al-Quds University professor who led Palestinian students on a visit to Auschwitz last year.