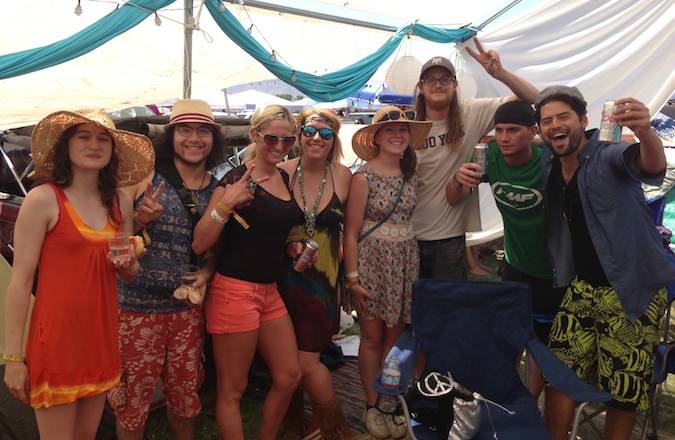 The Shabbat Tent offers a Jewish reprieve from the heat at the Coachella Music and Arts Festival. (Courtesy of Shabbat Tent)
Advertisement

The second weekend of the Coachella Valley Music and Arts festival starts today. That means nearly 100,000 people will descend upon the Colorado Desert in Indio, California for what has become the world’s highest-grossing music festival.

For most normal humans, the festivities double as an extreme endurance test. Temperatures regularly creep toward 100 degrees during the day – without the added heat from large, dancing crowds – and the music blasts for 12 hours, starting at around 11 a.m.

Just outside the main concert grounds, where thousands of people sleep in tents to prepare for the next day of the three-day party, festival-goers can find the Shabbat Tent – described by its leader as an “oasis of hospitality in the crazy festival environment.”

“It’s a little bit like the Jewish people in the desert,” said Shabbat Tent Director Rabbi Yonah Bookstein. “I think putting up a tent and welcoming people is in our DNA.”

The Shabbat Tent, now in its third year at Coachella, is exactly what it sounds like. Under Bookstein’s direction, a group of 10 or so volunteers (all in their 20s) helps run a Shabbat service and dinner on Friday night before the main acts hit the stage (this year’s Friday headliners include rock groups Tame Impala and AC/DC). On Saturday, the tent holds an 11 a.m. service followed by lunch. Jews from all over the world, of all denominations (and presumably varying levels of sobriety) stop in to hang out, meet new friends or just snack on some challah. After the music ends on Saturday night, the tent hosts an open jam session. 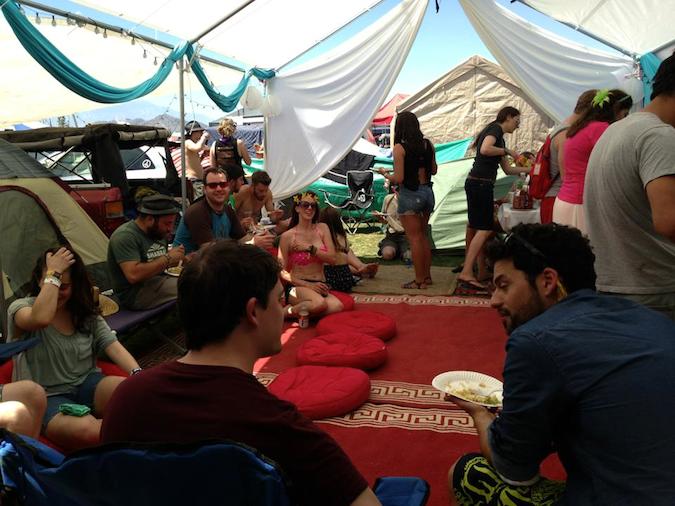 Jews from all over the world stop in to hang out, meet new friends or just snack on challah. (Courtesy of Shabbat Tent)

Bookstein, 45, is the rabbi of the newly formed Pico Shul in Los Angeles and is the rabbi-in-residence at the University of Southern California Hillel. He runs the tent with his wife Rachel and tries to see a few of the musical acts during the weekend, but he usually gets caught up in the tent’s activities and social atmosphere.

“People are coming in and out all day and all night,” Bookstein said. “Maybe at 3 a.m. there’s no one there.”

As an organization, Shabbat Tent has existed since 2000. But since Bookstein took over five years ago, the venture has broadened its scope, setting up shop in as many as seven festivals per year. Among others, Shabbat Tent has visited Manchester, Tennessee’s Bonnaroo Music and Arts Festival, Quincy, California’s High Sierra Music Festival and the Sundance Film Festival in Park City, Utah.

Musicians and artists often join in the services. Bookstein credits Matisyahu’s visits to the Shabbat Tent at festivals like Bonnaroo and the Langerado Music Festival for boosting the organization’s profile.

The premise has been such a success that Bookstein is working to develop a Shabbat Tent app, which would keep users informed about the organization’s events and help Jews at festivals without a Shabbat Tent create one on their own.

At Coachella two years ago, Bookstein said a young woman with tattoos and dreadlocks asked him about the tent as the festival was winding up on Sunday.

“She said, ‘If I had known that being Jewish was this cool, I never would have left after my bat mitzvah,’” Bookstein said.